How long can the myths still survive?

Realising that the much-cherished myths of the Boer War are so ridiculous and far-fetched, someone recently asked me how much longer they can last. In truth, it’s an impossible question to answer as, of course, one should never under-estimate the power of propaganda. One thing the post-war Afrikaner Nationalists, and the later Apartheid-regime, did brilliantly was to create a ‘national myth’ which hugely appealed to their target market[i]. Simply put, even today, a certain type of South African passionately wants / needs the myths about the Boer War to be true. Still frantically peddled by those increasingly beleaguered South African so-called ‘academics’ who refuse to drop their sheep-like loyalty to Apartheid-era propaganda, the myths remain a central part of the identity of an extremist section of male Afrikaners. So much so, indeed, that such fellows will continue to defend their reassuring fantasies tooth and nail, and nothing as trivial as ‘historical reality’ will be allowed to get in the way any time soon.

I mean, why bother to study and learn what actually happened when there’s still the option to bask in victimhood, hiding behind Apartheid-era myths, and the comforting utter rubbish that their ancestors were totally innocent, peaceful people, who only ever ‘wanted to be left alone’[ii], and never gazed across their borders[iii]… better yet, when they were suddenly ‘attacked and invaded’ (ahem) by the wicked British, one can understand the desire to believe / pretend / claim that their forefathers won every single battle, despite being outnumbered 1000:1 (or any other random ratio that pops into their head)… only finally giving up because the scheming Brits cheated… or something.

For those who wonder how such hogwash can still be believed by any functioning adult, the worrying thing is that national myths tend to linger about for many centuries. The Mel Gibson ‘epic’, Braveheart, was released just before I left Scotland, and I can still clearly remember the impact it had. Though it certainly created a splash, the problem was that it was complete and utter bloody rubbish. One critic described Braveheart as a film that “almost totally sacrifices historical accuracy for epic adventure”,[iv] and Gibson’s God-awful nonsense has been voted as one of the most historically inaccurate modern films[v], coming a dismal second on a list of such garbage in The Times in 2009. In his book, ‘Freedom’s Sword’, Peter Traquair referred to Wallace’s “farcical representation as a wild and hairy highlander painted with woad (1,000 years too late) running amok in a tartan kilt (500 years too early).”[vi]

Another expert on the period noted that the film contains numerous historical inaccuracies, beginning with the outfits worn by Wallace and his men, stating that, at that time, “no Scots […] wore belted plaids (let alone kilts of any kind).” And even when they did later start to be worn, it was not done so “in the rather bizarre style depicted in the film”. She compares the inaccuracy to “a film about Colonial America showing the colonial men wearing 20th century business suits, but with the jackets worn back-to-front instead of the right way around.”[vii] Summing up the film in another article, she wrote, “The events aren’t accurate, the dates aren’t accurate, the characters aren’t accurate, the names aren’t accurate, the clothes aren’t accurate—in short, just about nothing is accurate.”[viii]

Perhaps the best summation of just what absolute rubbish Braveheart was can be found in the book, An Utterly Impartial History of Britain. The author rightly claims Gibson’s Oscar-winning nonsense could not have been more historically inaccurate, even if a Plasticine dog had been inserted in the film and the title changed to “William Wallace and Gromit“.[ix]

Even worse than this, however, and as many pointed out, is that the historical inaccuracies meant the film was blatantly (and deliberately) anti-English / anti-British. It was described as being ‘xenophobic’[x] in the Economist, while an article in The Guardian stated that: “Braveheart gave full rein to a toxic Anglophobia”.[xi] In The Times, Colin McArthur took a similar line, saying “the political effects are truly pernicious. It’s a xenophobic film.”[xii]

Most amazing of all is that, in a First World nation in the late 20th century, this terrible, ill-researched, ahistorical, xenophobic, Hollywood nonsense nevertheless somehow had a significant political impact. As incredible as this must sound, the film was credited with sparking a sudden rise in support for the Scottish National Party – something which became known as ‘the Braveheart phenomenon’. The SNP won 6 seats in the 1997 General Election – up from the 3 seats they had won in the 1992 General Election – a boost which started a remarkable move from it being a ‘fringe’ party, to the main force in Scottish politics.

The SNP were still riding high on the back of this inexplicable ‘Braveheart phenomenon’ a few years later, and were keen to tap into the feelings around Gibson’s xenophobic myths in the run up to the 2014 independence referendum. The SNP leader, Alex Salmond, shamelessly commented that, the fact that 2014 would mark the 700th anniversary of the Battle of Bannockburn, made it ‘a good year to hold the referendum’.[xiii] As a 2012 article in the Economist noted,

For generations of Scottish children, a school trip to study the Battle of Bannockburn—a medieval clash which saw Robert the Bruce and his hardy spearmen rout a much larger force of English knights—has served as a milestone in their patriotic education. They learn how the underdog Scots caught the English in a trap, corralling their mighty horsemen “like sheep in a pen” and leaving them no room to attack. This victory, school groups hear, has “inspired the Scots ever since”.

And even after the SNP lost the referendum by 55.3% to 44.7%, a bitter rabble of True Believing ‘Cyber-Nat’ keyboard warriors immediately ignored this exercise in democracy, defiantly taking to social media to declare themselves members of ‘the 45’. Obviously, this was a reference to the Jacobite[xiv] Rising of 1745, and presumably ‘the 44.7’ didn’t have quite the same ring to it. 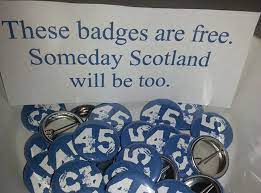 Embarrassingly, however, this is just yet another example of mis-understood, ahistorical Scottish national(ist) myth. In reality, ‘the 45’, which ended in dismal, if vaguely romantic, defeat on Culloden Moor, on 16 April 1746, was not – as ill-educated, nationalist types like to pretend – a war between ‘England and Scotland’, or, indeed, really much to do with Scottish independence at all.

Instead, ‘the 45’ was a French-backed attempt by a rather eclectic movement to put a Catholic, Stuart king back on the throne of the United Kingdom (England, Wales and Scotland having unified into the United Kingdom of Great Britain decades previously), which was ultimately defeated by the British army. The ‘Young Pretender’ this squabbling crew had in mind was Charles Edward Stuart, grandson to the last Stuart king of Britain, and better known as ‘Bonnie Prince Charlie’. Born in Italy to a Polish mother, Bonnie Prince Charlie was famously described by the brilliant Scottish comedian, Billy Connolly, not only as an ‘effeminate Italian dwarf’, but also the only man ever to be named after three sheepdogs.

The concept of Jacobitism can therefore not be in any logical way equated to Scottish independence, and though support for the somewhat amorphous movement was certainly strong in some of the clans of the western Scottish Highlands, Perthshire and Aberdeenshire[xv], the Jacobite power base was really in Ireland, not Scotland. Nor even should one think that all supporters the Jacobite cause necessarily wished for Great Britain to embrace Catholicism again. In truth, the various factions who backed the Jacobite cause did so for a variety of (sometimes completely incompatible and, indeed, contradictory) reasons, and – in a bid to gain support – the rather desperate Jacobite leaders responded by attempting to be all things to all men. It was very much a case of, as Groucho Marx put it, “Those are my principles, and if you don’t like them… well, I have others”.[xvi]

Bonnie Prince Charlie, supported by his trusted advisors, most of whom were long-term English or Irish Catholic exiles, wanted to reclaim the throne of a United Great Britain and rule it on the principles of the Divine Right of kings and absolutism, ideas which had been rejected by the 1688 Glorious Revolution. This objective was in direct contradiction to the motivations of some Scottish Protestants who supported the Jacobite cause in 1745, yet who opposed the Union, Catholicism and ‘arbitrary’ rule[xvii].

Perhaps not surprisingly therefore, the internal divisions and contradictions of the movement became increasingly apparent during the ’45 Rising; historian Frank McLynn identified seven primary motivations, with loyalty to the Stuart dynasty being the least important[xviii]. Irish Jacobites, for example, wanted an autonomous, Catholic Ireland and the return of lands confiscated after the Irish Confederate Wars. In England and Wales, however, many of those with Jacobite sympathies were (perhaps surprisingly) also Tories, who preferred a mercantilist strategy that emphasised the protection of British trade. Additionally, when the Jacobite rebels invaded England in 1745, they fully expected significant numbers of English Catholics to flock to their banner. There were indeed significant pockets of Jacobite sympathisers in those areas of Northern England with a high proportion of Catholics such as western Lancashire, Northumberland and County Durham[xix]. When push came to shove, however, few rallied to the cause, with the only real exception being the hastily-raised, and only 300-strong, Manchester Regiment[xx].

After the failure of their invasion of England, the Jacobites retreated back up into the Scottish Highlands, and were ultimately defeated by a British government army at Culloden, just to the east of Inverness. The British forces that day were commanded the youthful Duke of Cumberland[xxi] (who was a not-too-distant cousin of Bonnie Prince Charlie’s), and included 4 Scottish battalions (three Lowland, and one Highland), and one Irish battalion, plus a Scottish mounted regiment. I think it would be fair to say that very few of the Cyber-Nat fanatics who valiantly joined the latter-day online version of ‘the 45’, knew that one of Cumberland’s Scottish battalions, the Kings Own Scottish Borderers, had originally been formed in just 24 hours[xxii] to defend Edinburgh, not from the English, but from the first Jacobite uprising, back in 1689. And far from the way modern-day Scottish national(ist) myth prefers to present ‘the 45’, such was the relief at his defeat of the Jacobite rebels, that the University of Glasgow awarded the Duke of Cumberland an honorary doctorate by way of thanks.

So if Scotland’s experience is in any way indicative of how long ahistorical national myths can be kept alive, and used for self-serving / self-pitying / political / xenophobic / nationalistic purposes, we still have a few more centuries of Boer War myths to endure. Still, at least Mel Gibson hasn’t made a film about it yet, so I suppose we should be grateful for that.

[xiv] Formed in the wake of the Glorious Revolution of 1688, Jacobitism was a movement which supported the restoration of the Catholic line of the House of Stuart to the British throne. The name is derived from Jacobus, the Latin version of James, as the movement started with a desire to return (the Catholic) James II (of England) and VII (of Scotland) to the throne in place of his (Protestant) daughter, Mary II. Bonnie Prince Charlie, the leader of the Jacobite uprising in 1745, was the grandson of James II and VII

[xv] It is noteworthy that those Highland clans which still supported the Jacobite cause by 1745, included both Protestants and Catholics

[xvi] Groucho Marx was much more worth listening to than Karl

[xx] Initially raised as ‘the English Regiment’, the bulk of what remained of the Manchester Regiment was captured when Carlisle was retaken by British forces on 30 December 1745. Eleven officers of the regiment, and 16 other ranks, were executed as rebels in 1746

[xxii] On 18 March 1689, 800 men rushed to join the new regiment, so as to defend Edinburgh from the Jacobite forces of James II / VII