‘The King of Special Pleading’

I’ve become aware of an amusing character who has taken to Facebook in a desperate attempt to rubbish my books. Why he doesn’t actually research and write a book of his own is unclear, but his efforts online are always worth a laugh. In a ‘debate’ (ahem) about my writing, this fellow pounced on someone who tried to point out that my challenges to Apartheid-era myths are backed by plenty of sources. Ignoring the hundreds of references to the contrary, this unknowingly-entertaining chap dismissed absolutely everything I’ve ever written on the strength of a single quote by John Xavier Merriman: 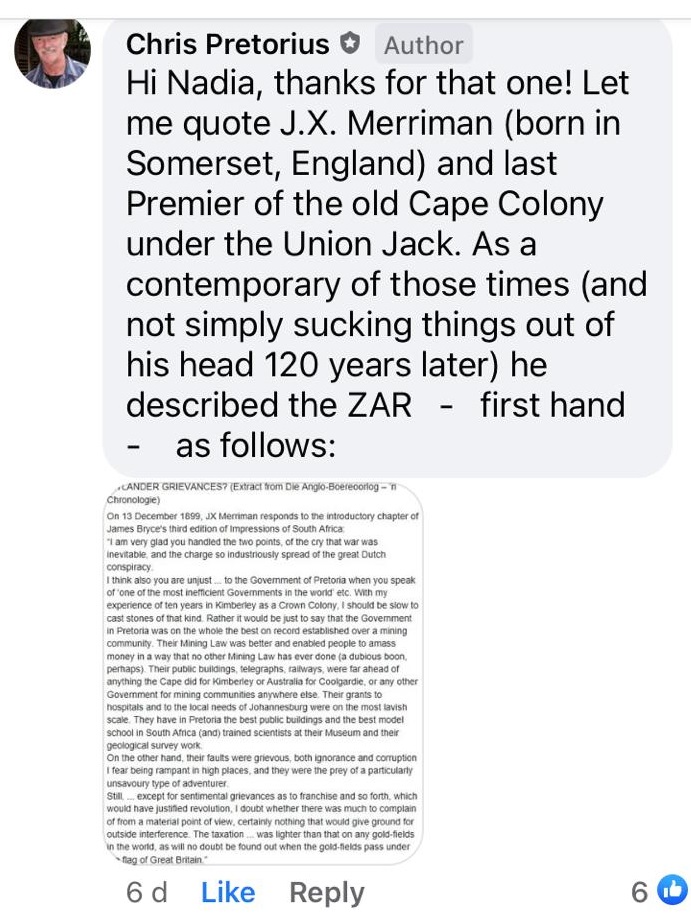 And so, by use of a single quote, ‘The King of Special Pleading’ clearly hopes his unthinking followers will be thick enough to believe it ‘belies’ everything I have ever written: 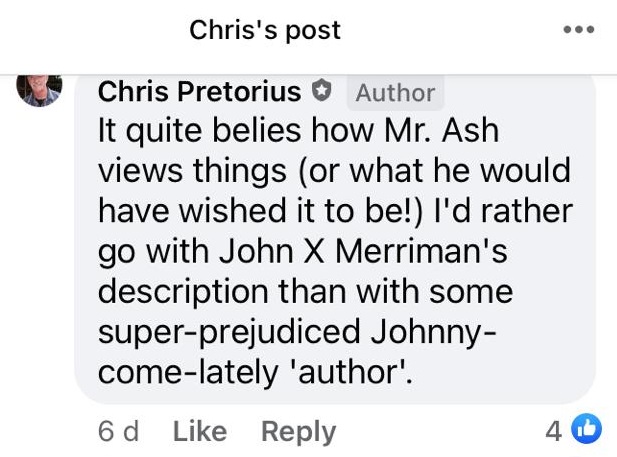 Unfortunately, not only does the quote he provides even include these statements about Kruger’s Transvaal:

‘Their faults were grievous, both ignorance and corruption being rampant in high places’ and ‘grievances about the franchise and so forth which would have justified revolution…’

The policy of the Transvaal was to push out bands of freebooters, and to get them in quarrels with the natives. They wished to push their border over the land westwards, and realize the dream of President Pretorius, which was that the Transvaal should stretch from the Indian Ocean to the Atlantic. The result was robbery, rapine, and murder.[i]

So without my even needing to turn to another source, this quote of Merriman’s rather ‘belies’ the increasingly frantic attempts to pretend that the Transvaal (which, let us never forget, was so racist and prejudiced that it made the later Apartheid regime look liberal and forward looking) was the innocent victim of the piece.

Merriman also clashed with Jan Hofmeyr, the leader of the Afrikaner Bond in the Cape. Merriman dubbed Hofmeyr as ‘the Mole’ for all the ‘underground’ work he (and his party) did in the years prior to the Boer War to destabilise the Cape, encourage racial animosity, support Kruger’s attempts to snatch Bechuanaland, and champion the Transvaal’s aim of replacing Great Britain as the paramount power in the region.
But don’t take my word for it: here is part of a speech Merriman made on the trouble that the Afrikaner Bond and Kruger’s Transvaal were clearly bringing to southern Africa:

‘…the situation is a grave one. It is not a question of localism, it is not a question of party politics, but it is a question whether the Cape Colony is to continue to be an integral part of the British Empire. The question is whether we intend to progress along the lines of freedom, of civilization, and respect for law and order, or whether we are ready to take the Transvaal for a model, and have our policy shaped by the Africander Bond.

There is no begging the question. That has been the plain question before the colony, and there is no use hiding it. That is the question said out of doors, and it should be said in public. It is said at the corners, and should be said from the platform. That being the case, strong language might be excused, but I will endeavour to be studiously moderate. It is not a time when any citizen can sit with his hands folded. They would have to keep the public men up to the mark, and each one of you will have to make up his mind whether he is prepared to see this colony remain a part of the British Empire, which carries with it obligations as well as privileges, or whether he is prepared to obey the dictates of the Bond?

From the very first time, some years ago, when the poison began to be distilled into the country, I felt that it must come to this—was England or the Transvaal to be the paramount force in South Africa? In any other country such an organization could not have grown, but here among a scattered population it had insidiously and successfully worked. What could they think of the objects of the Bond when they found Judge Reitz advocating a Republic of South Africa under one flag, and the Rev. Du Toit spluttering out his disloyalty?

No man who wishes well for the British Government could have read the leading articles of the Zuid Afrikaan, the Express and De Patriot, expounding the Bond principles without seeing the maintenance of law and order under the British Crown and the object they have in view are absolutely different things. As to the other doctrines of the Bond in reference to the restriction of commercial progress, and the non-education of women, they were errors of judgment. My quarrel with the Bond is that it stirs up race difference. Its main object is to make the South African Republic the paramount power in South Africa. ’[ii]

And just months before Kruger launched his crackpot invasions of British territory in October 1899, Merriman was writing to President Steyn of the Orange Free State, urging caution and expressing his worries:

‘The greatest danger lies in the attitude of President Kruger and his vain hope of building up a state on a foundation of a narrow unenlightened minority, and his obstinate rejection of all prospect of using the materials which lie ready to his hand to establish a true republic on a broad liberal basis. Such a state of affairs cannot last. It must break down from inherent rottenness.’
– John X. Merriman to President Steyn, 11 March 1899

None of this is ‘sucked out of my head’: anyone who has read ‘Kruger’s War’ (which either this fellow clearly hasn’t, or else he is not being honest about my work) will know that all the points I make are exhaustively referenced. It would seem I am such a challenge to the National Party myths that some have stooped to making things up about my writing.

Indeed, attempts to defend Kruger’s warmongering and expansionism are only possible when one blatantly ignores all the evidence… even including lots of things said by someone they’d “rather go with”.
It seems they will do absolutely anything except open their minds and actually read what the nasty old jingoistic bully Ash has written.

What a truly bizarre way to view history.