This plaque is the sort of thing one sees dotted about in South Africa, and which subtly maintain the Boer War myths: 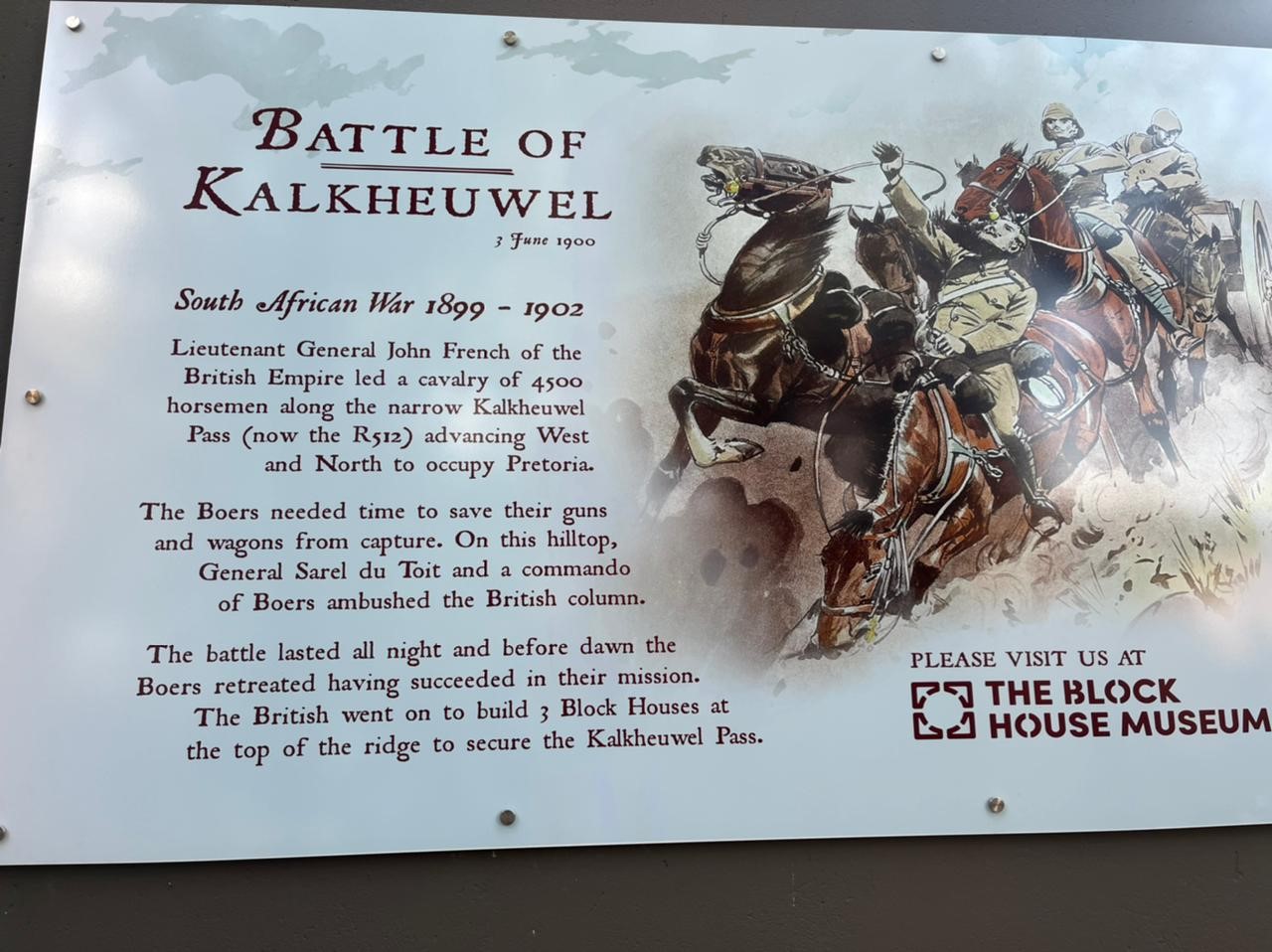 Unfortunately, this description of the action at Kalkheuwel is rather poorly-written and inaccurate, meaning that a visitor will learn very little from it. Though technically true, quite why Lt. Gen French is bizarrely described as being ‘of the British Empire’ is unclear[i], and one is left wondering why the phrase ‘a cavalry’ is used, rather than ‘a cavalry division’. Worse, the battle is described in such vague terms that the layman will be left thinking that the Boers won… which a cynic might think is the aim of the sign.

In reality, and following the capture of Johannesburg on 31 May 1900, Lt. General French, commanding the Cavalry Division, had orders to push on to the west of Pretoria, which was still in republican hands, so as to threaten Kruger’s capital. At around lunchtime on 3 June, he received word that some 1,500 Boers, with guns and wagons, were retreating via Kalkheuwel, presumably heading towards Pretoria. French, who was following the same route, ordered 1st and 4th Cavalry Brigades, supported by a couple of hundred MI[ii], to engage them[iii]. Note that French’s orders were to get to the west of Pretoria, not to prevent this Boer commando from fleeing.

The republican force in question was under the command of General Sarel Du Toit, and, holding high ground to the south of Kalkheuwel pass, they tried to hold off the cavalry, but were quickly driven from various positions. They then retreated into the gorge itself, a feature almost perfect for springing an ambush, and one described as ‘deep and narrow, shut in by a double rank of rugged kopjes’. Any semi-competent and semi-motivated force holding it could fend off an army for hours, if not days. Indeed, as one veteran of the action recalled: ‘An enterprising enemy could have wiped out the Cavalry Division, but probably General French knew well, before entering the pass at so late an hour and in such a random way, that such an enemy did not exist’.[iv]

Instead, Du Toit’s men sprang their ambush prematurely (this was not an unusual Boer failing throughout the war) and opened fire on the advance scouts of the cavalry as they pressed on. Initially panicked, the scouts fell back towards the main body of French’s force, but the General was up at the front and quickly determined the key ground as being ‘two hills, one on either side of the road… [these features were] attacked by the 1st cavalry brigade and Alderson’s men, with the 4th cavalry brigade and Hutton’s force in support, both heights were occupied with slight loss’.[v]

Swiftly driven from their positions, the Boers retreated after night fall[vi], leaving six (other sources say 11) wagons behind to be captured. Remarkably, French lost just 3 men killed, and 6 wounded in the action. As well as the loss of the supply wagons, Du Toit’s force lost between 20 and 30 killed (and thus, presumably, around 100 wounded). The Boer guns had been timidly held too far back to be effective, whereas the 12-pdrs of the Royal Horse Artillery were in the thick of the action and did excellent work. The NSW Lancers, who had been called into action by Major Allenby[vii] of the Inniskilling Dragoons, were also singled out for praise.

Neither the Times History, nor Maurice’s official history, claim that battle raged all night; instead, they both report that the Boers retreated (taking significant losses, and leaving some of their wagons behind) after night fall, having been quickly driven from their commanding positions by the Imperial horsemen.

Of course, the maintenance of the myths requires that every single action of the war to be spun into being a great Boer victory, but it is difficult to understand quite what ‘mission’ Du Toit is alleged to have ‘succeeded’ in. French’s movement was barely hindered, his casualties were negligible, and the advance continued the following morning. All Du Toit had really achieved was to be driven from a near-perfect ambush site and flee into the night, leaving behind part of his wagon train. And the Boer flight was not some sort of well-executed fighting withdrawal, but closer to a rout: ‘We found several Boer wagons, with provisions and baggage, abandoned on the road; sacks of mealies, of coffee, and of flour, and also female garments, were strewn by the wayside, showing the panic of their flight’.[viii]

On the morning of 4 June, ie. just hours after Du Toit’s ‘successful mission’, the Cavalry Division crossed the Crocodile River at an intact bridge near Hartebeest Poort as planned, and French despatched units to hold Commando Nek and Zilikat’s Nek – the latter having been abandoned by other fleeing Boers the day before[ix]. Indeed, thanks to what was described as his ‘rapidity and dash’[x], French’s division was perfectly placed to threaten Pretoria from the West[xi].

But I guess that wouldn’t have looked as good on the sign.

[i] I have never seen, for example, the Duke of Wellington, or Field Marshal Montgomery, described as being ‘of the British Empire’

[xi] In the event, this was not required as Lord Roberts’ main force swept the Boers before him and captured Pretoria after the battle of Six Mile Spruit