The RE Mounted Field Troop

One of the most enduring – and far-fetched – myths of the Boer War is the oft-spouted notion that the British infantry (resplendent in red coats and white shoulder belts, apparently) marched forwards, shoulder-to-shoulder, only to be effortlessly shot down in their thousands by the clever old Boers.

Needless to say, this is utter nonsense. Not only were red jackets a distant memory by the time of the Boer War[i], but the infantry tactics of British army doctrine were also thoroughly modern and appropriate. Additionally, far from being ‘hidebound by tradition’ as we are constantly assured by the normal suspects, the British army actually was ahead of its time, in that it had long embraced unconventional / specialist / ‘Special Forces’ units. In the Sudanese campaigns of the mid-1880s, for example, picked men were selected from other units to form four elite Camel Corps regiments.[ii]

In an earlier example, the famous Corps of Guides of the British Indian army was founded as early as 1846. It was unique in being a mixed infantry-cavalry unit and quickly gained the stature of a corps d’elite on the North West Frontier. The Guides received better pay than other units, thus allowing recruiters to pick and choose only the very best applicants. An even earlier example is the elite Rogers’ Rangers, a 600-strong light infantry unit raised from North American loyalists to support the British Army in the French and Indian Wars of the mid-1700s.[iii] The Rangers excelled at reconnaissance and special operations behind the lines, and were greatly valued by the British high command. The name of this formidable and unconventional unit lives on in today’s US Army Ranger units.

The Boer War equivalent of Roger’s Rangers was arguably Rimington’s Scouts, or ‘Tigers’ as they were commonly known. Formed by Major Rimington[iv], a regular British Army officer, the Tigers were made up of picked local frontiersmen (recruited from both sides of the border between the Cape Colony and the Orange Free State) and hunters—self-reliant, resourceful and highly motivated men with good knowledge of both the terrain and local language.[v] Working independently in small groups, Rimington’s Tigers acted as the eyes and ears of British commanders on the Western Front[vi], quickly earning a reputation akin to that of the Long Range Desert Group of Second World War fame.

Perhaps rather less well known is that the Royal Engineers were also quick to a deploy an unconventional formation to South Africa. Commanded by Major Hunter-Weston[vii], the Royal Engineers Mounted Field Troop was a ‘highly mobile, lightly equipped version of the standard RE Field Company, combining telegraphers, bridging specialists and even photographers. Unknown in continental armies at this point, it was still something of an experimental formation in Britain, with its roots in colonial campaigning and the large-scale manoeuvres of the Indian Army in the early 1890s’.[viii] The field troop was attached to French’s Cavalry Division and soon established a reputation for daring demolition raids behind the republican lines.[ix]

Just before Bloemfontein was captured in March 1900, Hunter-Weston personally led a small patrol of his mounted sappers and volunteers from the cavalry pioneers, pulling off an audacious coup against the railway line which connected the capital of the Orange Free State to the Transvaal. In an operation of which the modern-day SAS would be proud, the gallant Major and his small party pushed:

‘…round eastwards until he struck the railway about seven miles beyond the capital, and, having wrenched out some rails, proceeded along the line to find a culvert. There were numerous parties of Boers moving, or on picket duty, all of whom had to be avoided; but the culvert, when found, proved to be guarded.
Nevertheless, by creeping forward, a charge of dynamite was successfully laid and exploded, and the line was cut effectively. Major Weston and his men succeeded in re-joining the escort, and getting off with no loss, despite having, as dawn broke, to charge through a Boer patrol which had stumbled accidentally across their path, and only one slight wound amongst the party resulted.’[x]

Not only did Hunter-Weston’s patrol prevent any possible reinforcement of Bloemfontein, it also meant that an enormous haul of rolling stock was bottled up there to be duly captured when Roberts took the city. Conan-Doyle reported the bag to be ‘28 locomotives, 250 trucks, and 1,000 tons of coal, all of which were standing ready to leave Bloemfontein station’.[xi] 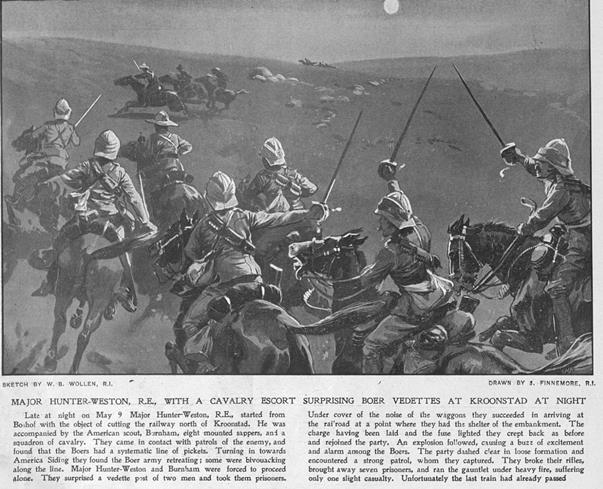 Hunter-Weston and his mounted sappers were to repeat the trick a couple of months later, striking the railway line north of republican-held Kroonstad deep behind the Boer lines. Navigating by the stars to slip past various defensive positions, the Major—together with the highly colourful Major Frederick Burnham[xii]—led 50 volunteers on a successful night raid some 15 miles behind the federal lines; a foray which, though lacking the strategic impact of the Bloemfontein raid,[xiii] The Times enthusiastically claimed to be ‘one of the most stirring, gallant and self-sacrificing side-histories of the war’.[xiv]

In addition to the daring exploits of Major Hunter-Weston, the seizure of the Bethulie Bridge – right from under the nose of its defenders[xv] – was another coup de main any modern-day SF troops would be proud of. There are other examples during the active defences of Ladysmith, Mafeking, Elands River, and Wepener in terms of the British penchant for launching daring night raids on Boer guns; in contrast, and despite the modern-day myths of the Boers mounting endless cunning lightning attacks, the federal besiegers made no such raids against British gun positions during any of their lengthy sieges.

Indeed, while the republicans were content essentially to remain passive during the sieges and while holding defensive lines, it was the Imperial troops who always sought to retain the initiative throughout the Conventional phase of the war. Not only did unconventional units of highly motivated, highly-trained picked men, like the RE Mounted Troop and Rimington’s Tigers, prove highly effective, they also shatter the tired old nonsense of the British army being ‘hidebound by tradition’.

[i] Most British infantry units did still wear red jackets in the First Boer War of 1880/81, however. This seems to confuse some simple-minded folk who muddle up the two conflicts, despite them taking place 20 years apart

[vi] As did a similar, but smaller unit, the Natal Guides, over on the Natal Front

[vii] Later, Lt. Gen Sir Alymer Gould Hunter-Weston KCB DSO GStJ (1864–1940), born in Kilmarnock and commissioned into the Royal Engineers in 1884, Hunter-Weston commanded the British 29th Division at Gallipoli and the VIII Corps at the Somme during the Great War, before being elected as the Unionist MP for North Ayrshire

[xii] An American frontiersman who was taught field craft by Red Indians, Burnham had fought in the Matabele Wars and survived the Shangani Patrol. He was brought to South Africa on the orders of Lord Roberts to serve as his Chief of Scouts. Burnham is said to have encouraged Baden-Powell’s interest in field craft and was thus an inspiration for the Scout Movement

[xv] On 10 March 1900, British scouts arrived at Bethulie just in time to see the railway bridge being blown up. The Boers then turned their attention to the nearby road bridge and would have blown that up too had the dozen or so scouts not gallantly attacked the demolition team. With no idea just how tiny a force they were being assailed by, the burghers crowding the bridge fled, and, in an action worthy of the SAS of the Second World War, the crossing was taken intact