I am sure that we have all met someone who ‘knows’ the Kruger Millions are buried on his grandad’s farm… and will regale you with the story every time he has had a few drinks. The tale is ‘supported’ by things a farm worker told his father 80 years ago, or something written in a letter, but really there is no actual evidence at all. Alas, in some ways, reading ‘Looted Gold’ feels a little like listening to one of these fellows at a braai. 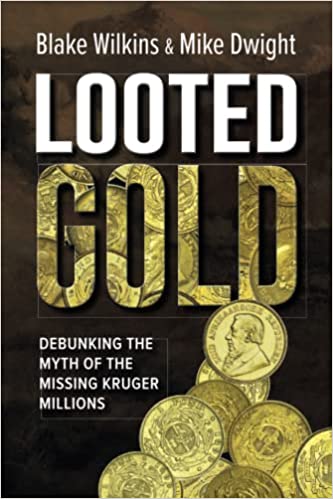 ‘Looted Gold’ could have been a really good book, but, though well worth a read, I feel rather lets itself down. The subject is fascinating but there are numerous typos and irritating examples of poor editing, and a strange, inconsistent, mixing of period monetary values, and modern-day equivalents. The authors make the case that the ‘Kruger & Co’ oligarchy engaged in larceny on an industrial scale, pillaging the pre-war Transvaal in a way that makes the ANC’s modern-day state capture look almost restrained. It is this looted money which they assert to be the real ‘missing Kruger Millions’, and claim an enticing legend was created to explain away Kruger’s many years of rapacious theft, and divert attention away from bulging Swiss bank accounts. Despite this, the authors nevertheless perpetuate a few of the old myths: the notion that the Boers were somehow cheated out of the Kimberley diamond mines, for example, or – even more ridiculous – the baseless statement that Kruger made ‘earnest attempts to stave off war with Britain’.

The fact that Kruger’s ruling clique had been pushing for an offensive alliance against the British since at least 1887, boasted of building an Empire from the Zambesi to the Cape, had been gun-running and rabble rousing in British territory for years, were the ones who mobilised first, were the ones who deployed their forces to the borders, and – this one really should be the clincher – the Boer republics were the ones who declared war and invaded British territory, all make a nonsense of any claims of an ‘earnest’ attempt to prevent war. In reality, and just like Putin in February 2022, the power to prevent a war rested absolutely in Kruger’s gnarled, troglodytic hands: the simple fact is that all the Bible-bashing old troll had to do to ‘stave off’ a war was… not declare war.

More troublesome, however, is that ‘Looted Gold’ reminded me a little of every tin-foil-hat-wearer’s favourite read, ‘Chariots of the Gods’. Both books indulge in a great deal of supposition, but fail to back their (admittedly interesting) theories with terribly much in the way of hard facts. In his ‘Chariots of the Gods’, Erich von Däniken repeatedly says things like ‘on such-and-such a mountain, there is a thousand-ton rock which has been carved with a precision impossible with ancient tools… no one knows when this was done… or how… could this be evidence of alien intervention?’

Putting a lot of store in a few (far from unambiguous) entries from a low-ranking New Zealand soldier’s diary, I felt the authors of ‘Looted Gold’ used a similar technique a little too often to be terribly convincing. Though it is certainly a thought-provoking read, there are rather too many open questions, theories, and tenuous suggestions proffered, and rather too few answers backed with actual evidence. To be fair to the authors, they do acknowledge a fair amount of guesswork in their attempts to ‘join the golden dots’.

Of course, it is unlikely that any book will ever finally put to bed the ‘mystery’ of the Kruger Millions, and what makes ‘Looted Gold’ worth reading are the details of just what an utterly corrupt and dishonest regime Kruger presided over. The authors leave the reader in no doubt that Kruger and his minions were nothing better than an unscrupulous gang of criminals – something which is so utterly blatant that it really should never have been in doubt. Though strangely still admired by some today, the reality is that Kruger & Co ran a kleptocracy and indulged in state capture on a massive scale, helping themselves to many millions of pounds in the 1880s and 90s… before stupidly plunging their republic into a war against the Greatest of the Great Powers of the Age. Nevertheless, some South African so-called Historians will continue to cling to their comfort blanket of Apartheid-era myths, and keep pretending that Kruger was a poor, innocent fellow; to do otherwise would be unthinkable, as it would require admitting that their life’s academic work has been an utter sham.