The more one interacts with Defenders of the Myth™, the more obvious it is that they can only keep their fantasies staggering on by simply making things up. So determined are they keep alive the spluttering fairy tales of Apartheid-regime propaganda, that they will spew out complete nonsense like this:

Like all the best lies, this poorly written nonsense is built on a tiny kernel of truth, around which this fellow has just spun a load of self-serving rubbish to try and justify Kruger’s invasion of Natal (and, presumably, the Cape, Bechuanaland etc).

For a start, there was no such thing as ‘the Vryheid republic’ – but, hey – when have inconvenient things like ‘history’ and ‘geography’ ever bothered these fanatics? Vryheid was, in fact, the ‘capital’ of The New Republic, which was carved out of the wreckage of post-war Zululand by Boer freebooters.

And the land was not given to the Boers, ‘for their assistance in driving the British out of an area of Zululand’ – this pie-in-the-sky bullshit was simply pulled out of his arse, but is the sort of thing that goes down well at braais.

In reality, and exactly as they had done in Bechuanaland, the land-hungry Transvaal Boers wanted to snatch tracts of Zululand. This was done by taking advantage of inter-tribal chaos and ongoing strife between various competing chiefs, with the Boers backing a side in return for (unspecified) tracts of land. Zululand was ripe for the taking as it had been in considerable turmoil since the British victory in the Zulu War of 1879, with various chiefs vying for supremacy.

At a meeting on 23 May 1884, a Boer delegation agreed to support Dinizulu in his quest to become supreme chief of the Zulus.[i] With victory attained just a few months later, hundreds of Boers moved to occupy the newly acquired territory, rather unimaginatively naming it the New Republic.[ii] A capital was laid out and named Vryheid (‘Freedom’), a name the town retains to this day.[iii]

Though their apologists maintained that the New Republic had been gained and occupied by private individuals rather than by the government of the Transvaal, this was merely the latest in the by-now-familiar method of expansion: hundreds of farmers on the border would, one way or another, move in and occupy someone else’s land, declaring it yet another mini-republic, though one blatantly—and inextricably—linked to the ZAR. Indeed (and though he declined) none other than the Commandant-General of the Transvaal, ‘Slim’ Piet Joubert, was invited to become the president of the New Republic[iv].

There is no doubt that the new arrivals wanted to keep expanding relentlessly towards St Lucia and the coast, cajoling the emasculated Dinizulu into accepting their dubious ‘protection’ across his lands. Attracted to the feeding-frenzy, hundreds of adventurers and land-grabbers rushed to the area, and soon no fewer than 800 Boers demanded enormous farms for their (supposed) part in securing Dinizulu’s victory; it was reckoned only about 120 Boers had been there during the fighting. Their arrival encouraged the Boer leaders to increase their demands, convinced that they had the manpower to snatch an even bigger chunk (perhaps five-sixths) of Zululand[v], and the Boers were soon fanning out to peg out farms, and grab what they wanted.

By late 1884, however, HM Government was finally moved to act – not because of what the Boer carpet baggers were up to, or out of altruism for the Zulus, but due to wider geo-political concerns. A German intelligence mission had arrived in the area[vi], and a German frigate was reported at St Lucia. Reports of a planned joint German / Boer occupation of St Lucia were the final straw, and London was reluctantly persuaded to re-assert British claims to area, and declare a protectorate over the coast of Zululand so as to pre-empt ‘trouble with German adventurers’.[vii] After a few futile attempts to defy British supremacy, in June 1885, the German Colonial Office declared they had no further interest in the area, thus removing the potential threat to the shipping lanes to India and the east.

Rather shamelessly, the leadership of the New Republic convinced themselves that they had been ‘cheated’ out of land which they were in the middle of trying to steal from the Zulus, and sought help from France, Holland and Germany, while ‘Vryheid, Pretoria and Berlin protested in chorus’.[viii] All that mattered to London was that St Lucia, the only potential harbour between Natal and Lourenço Marques – with the possible exception of Kosi Bay – was now safely in British hands.

In October 1886, in return for British recognition of their state, the New Republic agreed to limit their territorial pretensions, and drop their (rather ridiculous) Protectorate over the rest of Zululand. The borders of the New Republic were agreed on 25 January 1887; they had been foiled in their drive to the sea, but Kruger’s land-grabbing adventurers had nevertheless seized two-fifths of the former Zulu kingdom.[ix] After almost of decade of trying to avoid responsibility for it, HM Government grudgingly accepted the rest of Zululand as the British Colony of Zululand in May 1887. 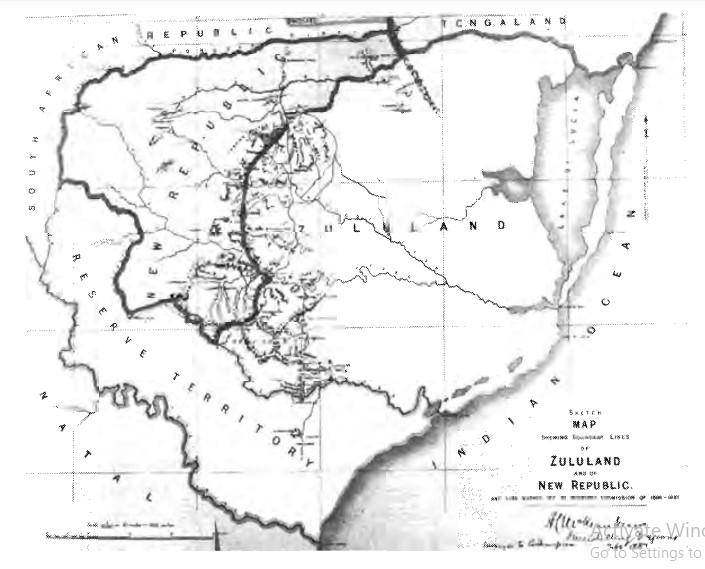 To the north of Zululand and the New Republic, and between the ZAR and the last-possible chance for a still much-coveted sea port, lay the small, sparsely populated kingdom of Swaziland.[xi] For decades the ever-expansionist Transvaal Boers had taken advantage of any political power struggle to encroach on Swazi territory, and had secured about half of the land once controlled by the Swazi king. Despite the independence and borders of Swaziland having been formalized and acknowledged by the ZAR in both the Pretoria Convention of 1881 and the London Convention of 1884, Kruger remained determined to gain control of the rest of the territory. In 1886 the paramount chief of the Swazis, Mbandini, informed the governor of Natal that Piet Joubert had visited him, requesting he issue a declaration that ‘he and all the Swazis agree to go over and recognize the authority of the Boer Government, and have nothing more to do with the English’.[xii]

When Mbandini refused, Joubert had said:

‘Those fathers of yours, the English, act very slowly; and if you look to them for help, and refuse to sign this paper, we shall have scattered you and your people, and taken possession of your land before they arrive. Why do you refuse to sign the paper? You know we defeated the English at Majuba.’[xiii]

Joubert had gone on to add, rather optimistically, that the British Empire was a ‘broken reed’. By the shocking standards of Kruger’s Transvaal, Joubert was something of a moderate, so his remarkable outburst should leave one in no doubt as to the impact of that battle on the mind-set of the men who ran the ZAR: after their victory at Majuba, their contempt for the British was such that, if even relative moderates like Joubert believed the British Empire was a spent force, others felt that the whole of southern Africa was simply theirs for the taking.

Knowing the ZAR’s intentions, Mbandini repeatedly asked for imperial protection and for a British resident to be installed, just as the chiefs of the Basuto and the Tswana had done. Unfortunately, and again, just as in the cases of the Basuto and the Tswana, the British were hesitant to get involved. However, the ZAR’s aggressively expansionist policy knew no such reluctance and, in the now time-honoured fashion, a group of Transvaal Boers moved into Swazi territory and declared yet another mini-republic. This one was called the Klein Vrystaat (‘the Little Free State’) with the tiny settlement of Piet Retief serving as the capital,[xiv] and just like the New Republic before it, the Klein Vrystaat was duly incorporated into the ZAR in August 1890.[xv]

Under increasing pressure from the ZAR, Mbandini was coerced into giving mining and grazing rights to increasing numbers of settlers, and granting concessions allowing the Transvaal to run his ‘postal, telegraphic, banking, and customs’. This sneaky takeover was so successful that in 1893 the British were essentially presented with a fait accompli and their efforts to arrange a system of ‘dual control’ were too little, too late.

The following year, a group of Swazi envoys travelled to Great Britain to beg Her Majesty’s Government to declare a protectorate over their territory, but again this was refused. Later that same year, the British signed a convention with the ZAR, granting the latter the administration of Swaziland against the will of the Swazi people, their king, and the Queen Regent.[xvi] Indeed, the Queen Regent claimed that she was prepared to strangle herself to death with a whip rather than to surrender to the Transvaal.[xvii]

A clause in the convention gave the ZAR the right to establish a port at Kosi Bay, but on the condition that they built a railway to the coast. Though they had allowed Swaziland to fall into the hands of the Boers, the increasingly hostile attitude of the ZAR finally forced London to act. Kruger’s chaotically crackpot government had not even commenced building the required railway, and thus, in 1895, the British moved to annex Tongaland (a small strip of land that separated Swaziland from the Indian Ocean) to Natal. Indeed, Kruger’s drive to the sea was thwarted by none other than the ruler of Tongaland, the Queen Regent Zambili. She refused to have anything to do with the Transvaal’s agents, and instead enthusiastically accepted British suzerainty.[xviii]

And so, to return to the claims made by this buffoon:

The New republic / ‘Vryheid republic’ was not given to the Boers in thanks for ‘driving the British out of Zululand’.
The New republic / ‘Vryheid republic’ was still part of the Transvaal in 1899 – it was not annexed by the British.
Today, Vryheid is about a three-hour drive to the coast, so, given the borders agreed in 1887, the New republic / ‘Vryheid republic’ did not in any way equate to Kruger having a sea port. For that to have happened, London would have had to turn a blind eye to German Imperial ambitions, and also to Kruger’s filibusters, carpetbaggers and chancers annexing the entirety of Zululand (aside from the small Reserve Territory on the border of Natal).
To the north, the ruler of Tongaland rejected the never-ending encroachment of the Transvaal Boers, and accepted British protection.
Perhaps needless to say, but the claim that ‘Kruger jut (sic) wanted back what the British had stolen prior’ is the most ludicrous of all. In reality, he started the Boer War to drive the British from southern Africa, and, in its place, to build an Afrikaans Empire ‘from the Zambesi to the Cape’.

[iii] Vryheid is now in Natal, the border having been redrawn in 1903 in the wake of the Boer War.

[iv] Lukas Meyer and Louis Botha were also involved, with Meyer serving as the first President of the republic

[xv] This particular land grab is still evident on modern maps which show the strangely-shaped ‘bite’ taken out of Swaziland to the north east of Piet Retief.

[xvi] In the Boer War a few years later, Mbandini’s widow, NabaTsibeni, known as the Queen Regent, declared for the British. When the Transvaal was annexed to the British Empire, she requested that Swaziland be annexed too.

[xviii] Fitzpatrick, The Transvaal from Within, p. 45