The 8th Brigade at Dundee

There is a certain type of person[i] who, desperate to justify the republican invasions of British territory which started the Boer War, will claim that this was only done because ‘the British were massing on the borders’. Not only is this patently untrue, but it also defies all logic: if the British were ‘massing on the borders’, how did the Boers manage to invade so deeply into British territory, annexing vast swathes of it? Still, it seemingly serves as a fig leaf to justify the aggression of the Boer republics in the minds of those who aren’t actually interested in historical reality.

With war appearing inevitable, local scratch forces were hastily raised in Mafeking and Kimberley, but – aside from half-a-battalion of the Loyal North Lancs which was rushed up to defend the latter[ii] – the only British army unit which had been moved even vaguely ‘near the border’ when the Boers attacked was the 8th Brigade[iii]. Buller’s defence plan had been to abandon northern Natal, pulling General White’s garrison back from Ladysmith to take up positions on the southern bank of the Tugela (shown on the map below, in purple). At the insistence of the Natal Government however, and very much against the wishes of the army command, the 8th Brigade had been moved up to Dundee to protect the strategically important coal mines there. 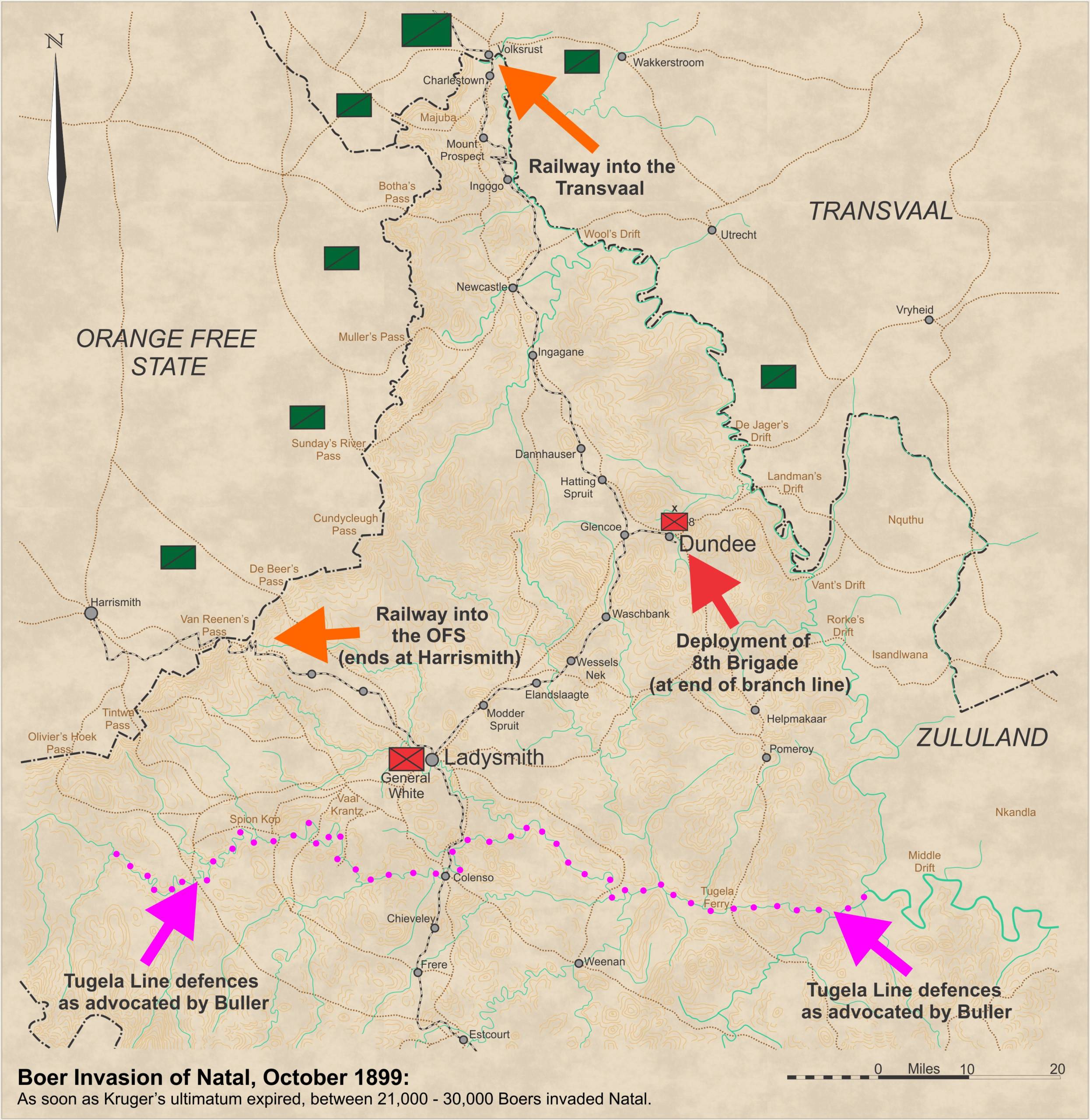 Despite all this, and the fact that Dundee is not on the border, this is nevertheless enough for the Apartheid-era propaganda machine (and every ‘useful idiot’ ever since) to pretend it was some mass troop movement, poised to invade the poor, innocent, defenceless republics.

Not only that, but a quick glance at the map above (and as indicated by the red arrow) will show that Dundee was sited at the terminus of a railway branch line. If the 8th Brigade was – as some lunatics frantically try to pretend – a ‘British army, massed on the border, poised to invade the republics’, why was it not deployed on one of the railway lines which actually entered either of the republics, as marked by the orange arrows? The railways were absolutely critical to supply any potential offensive move – as the old saying goes: ‘Amateurs study tactics, armchair generals study strategy, but professionals study logistics’. One would have to be mentally sub-normal to think that the deployment of the 8th Brigade to Dundee was in anyway an aggressive act.

What is more interesting still is what I read today, in a book called ‘Seven Months Under Boer Rule’, written by the Rev Bailey, who served as the Vicar at Dundee’s Anglican church at the time. On p.14 of his firsthand account of events, he explains that the last battalion of the 8th Brigade (the Irish Fusiliers) only arrived in Dundee on Monday the 16th of October – five days after the Boers declared war… supposedly because the wicked British were ‘massing on their borders’.

What’s really amazing is that anybody still believes this rubbish, and still faithfully spews it out on Quora, at braais every weekend, and even in certain self-pitying books about the conflict.

[ii] Despite pleas for more artillery to defend the town, a battery of 12-pdrs in storage at Cape Town was not mobilised

[iii] A British infantry brigade of the period was formed from 4 battalions – ie. just around 4,000 men in total. It goes without saying that this is not, therefore, ‘an army’