Pick a number! Any number! 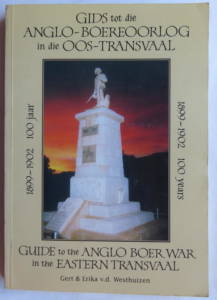 Doing their best to keep the myths alive…

I was recently loaned this book by a friend, and it didn’t take long before I spotted a hilarious claim on page v:

‘It is not certain how many of the 100,000 Boer farms that were burnt, were located in the Eastern Transvaal’.

As anyone who has spent any time in South Africa will attest, one of the most entertaining things about the Boer War is the way that True Believers just make up anything they want to support their cherished myths; on the one hand, the republican defeat is always explained away by claiming ‘we only had a handful of men!’, but in their next breath, they are happy to pretend that ‘100,000 farms’ were burnt.

The reality is that 87,365 ‘Boers’ fought the British during the war – bearing in mind that every burgher was liable for Commando service. Of course, many of these fellows were townsmen, traders, transport riders, merchants etc (ie. burghers who had no farms) or Cape Rebels (whose farms, if they had one, were not touched) or foreign mercenaries / volunteers (who obviously had no farms in South Africa). True Believers also love to go on about the young boys who went off to fight to ‘defend’ (bollocks) their republics beside their fathers and grandfathers – clearly these young lads did not own their own farms either.

One should also not forget that a large chunk of the republic armies was made-up of bywoners – uneducated, landless, poor ‘white trash’, who, by definition, had no farms. Many decades prior to the war, the large numbers of such impoverished whites had been noted by the Dutch Reformed Church and it was reckoned that the ZAR spent one third of its budget on poor relief. One historian suggests that half of the rural whites on the Highveldt were bywoners by the end of the century.[i]

As uncomfortable as it seems to be for some to accept, this reality is certainly supported by records kept at the time. Looking at the finances and land holdings of residents in six very different Concentration Camps[ii], it was found that 70 per cent of families owned no property whatsoever, and those that did held very small amounts. The register at Irene Camp, for example, showed that of 2,386 heads of families, only 270 were land owners[iii]—a statistic which hardly supports the notion that the camps were full of families burnt off land they owned.

So who, pray tell, are we meant to believe that these ‘100,000 farms’ belonged to? Even if every single Boer who fought the British had a farm burned by the wicked old Brits (which is clearly utter rubbish) – then that still wouldn’t provide enough farms to explain this nonsense… of course, a few wealthy burghers would have owned more than one farm, but are we really meant to believe that tens of thousands of Boers had several farms?

Indeed, even one of the leading Defenders of the Myth, Professor Fransjohan Pretorius (a man who never hesitates to paint the British as the evil bogeymen, and to Hell with the facts) gives the figure of farms destroyed as 30,000[iv] – we can be absolutely sure he would quote as high a number as he could get away with, and there is little doubt he was itching to pretend it was 300,000[v].

Goodness knows, therefore, what inspired ‘Gert & Erika v.d. Westhuizen’ to take the figure of 30,000, triple it, and then add another ten thousand for good measure. But this is exactly how True Believers operate – troublesome things like facts and historical reality do not trouble them unduly, and why claim that 30,000 farms were burnt, when you can pretend 100,000 were? Why admit there were only about 200,000 imperial troops in country when you can pretend it took ‘millions’ to defeat the Boers? Why state that around 20,000 died in the Concentration Camps when you can squeal and shriek that the British ‘murdered’ two, three or five times that number.

When it comes to the Defending the Myth, just pick a number and scream it loudly.

[v] Pretorius et al also cunningly pretend that the British were responsible for all the destruction, blatantly ignoring the fact that the Bitter-Einders did plenty of farm burning themselves… though, of course, this reality does not fit with the Apartheid-era myths which True Believers still dutifully (if rather frantically) peddle.