A friend let me know that some self-loathing, ‘right-on’ morons were up their normal tricks in Glasgow a couple of weeks back:

This is, of course, a pathetic act of vandalism against a monument which paid respects to those men of Glasgow who fought and died in the Boer War.

While searching for information on this, I came across another article concerning the vandalisation of a Boer War memorial, this one in Burghersdorp, South Africa:

Again, this was a deeply childish and pathetic act, though what really caught my eye was the truly brain-dead statement by Marina Vn Zyl, a local DA councilor, who mindlessly claimed that:

“This monument was erected in 1908 before the apartheid regime. It was for the boers fighting against the coloniser, the British. So they are also freedom fighters”.

It stretches credibility that Van Zyl cannot know that Burghersdorp is in the Eastern Cape – which was, of course, part of Britain’s Cape Colony at the time of the Boer War. The Boers who the memorial honours were not ‘freedom fighters’ or ‘fighting against the coloniser’ – they invaded Cape Colony: 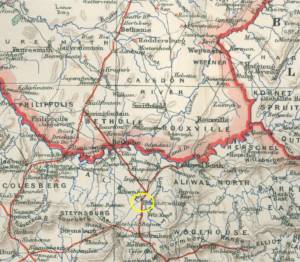 I have highlighted Burghersdorp’s location with a yellow circle, to assist Councillor Van Zyl. She will no doubt be amazed to learn that the town she represents is well south of the border with the Orange Free State

To pretend that forces of the foreign powers which invaded a self-governing Colony of the British Empire were ‘freedom fighters’ is ridiculous. It is like claiming that a (hypothetical) American invasion of Canada in 1899 would be an act by ‘freedom fighters against the coloniser’ – ie. utter hogwash.

If even DA councilors are still spreading Apartheid-era lies and propaganda, one wonders what hope there really is for South Africa.