On this day in 1901: The action at Cyferfontein

As 1900 ended, the Guerrilla War still spluttered on. Commandos under De le Rey, Kemp and Beyers had concentrated and, on 13 December 1900, attacked the camp of General Clements at Nooitgedacht in the Magaliesberg mountains to the west of Johannesburg. The Boers had overrun the camp, and though Clements had extracted a portion of his outnumbered force and all his guns, 630 men were killed, wounded or taken prisoner.

In the wake of the victory, Beyers moved his commando back north again, returning to the Waterberg mountains without incident. The forces of De la Rey and Kemp instead trekked south towards Ventersdorp and Lichtenburg, with General French in pursuit. The commandos evaded French’s columns, however, and doubled back north again. Though they had shaken off French, forces in the region of Ventersdorp under Major-General Babington[i]  picked up their trail and closed in.

On the morning of 5 January 1901, two squadrons of Imperial Light Horse, under Colonel Woolls-Sampson[ii], pushed into the Magaliesberg as part of Major-General Babington’s 1,600-strong column[iii]. Babington’s quarry was De la Rey’s Commando, which intelligence reported to be lurking some 30 miles west of Krugersdorp. Major C. J. Briggs, a professional career officer of the 1st Dragoon Guards, had been attached to the Imperial Light Horse, as there had been a growing feeling in British High Command ‘that all is not well with the ILH’[iv]. By early 1901, the ‘Uitlander Regiment’ was certainly very different from the dashing unit which helped smash Kruger’s invaders at Elandslaagte and held the line at Wagon Hill; considering their work to have been done, and the Boer invasions to have been defeated, many of the original recruits had taken the chance to leave the regiment, and though the two squadrons Woolls-Sampson led boasted about 200 men[v], about half of were raw recruits, with many of the other half being disgruntled men, keen to get away on some long-awaited leave. 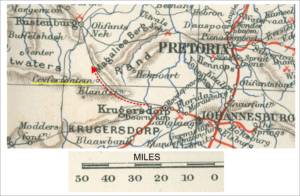 As Babington’s force marched northwest, numbers of Boers were sighted off to the British left, moving from one hill to another on a farm called Cyferfontein, and the Major-General ordered Woolls-Sampson to chase them off. Always eager to get at his hated foe, Woolls-Sampson neglected to dispatch any scouts, and instead led his two squadrons off at a ‘fast trot’ towards the Boer-held hills. So rapid was the advance of the ILH, indeed, that a pair of attached pom-poms under Captain Brierley RA[vi], were unable to keep up, and soon fell behind. Briggs twice cautioned the impetuous Woolls-Sampson to slow down, and send scouts forwards, but ‘Sambo’ was having none of it; even when he was finally persuaded to deploy scouts, he pressed his troops forward so close behind them as to defeat their purpose. 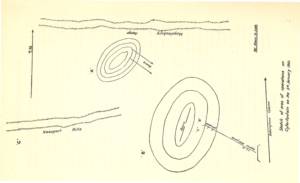 Officer’s sketch map of the action

De la Rey had rushed about 700-800 Boers to the hill closest to the British column, and they lay hidden in the long grass on the hill top. These suddenly opened fire on the on-coming ILH at only about 50-100 yards. Fortunately, Briggs had already deployed his squadron (‘C’), but Woolls-Sampson’s ‘B’ Squadron took the full brunt of the ambush. True to form, however, the gallant Lighthorsemen ‘behaved magnificently’ and were ‘wonderfully steady’:

‘those who survived the first volley dismounted , their panic stricken horses plunging madly, and returned their fire. They could see little, however, of their foes, who kept well down in the long grass. Many of the surviving men took cover and fired from behind their dead horses; others, to get a better target, knelt, returning the fire in that position, a number of them had the tops of their heads shot off’.[vii]

The indomitable Woolls-Sampson remained mounted throughout, utterly disregarding the fusillade as he shouted and encouraged his men. After ten minutes of hell, even Woolls-Sampson bowed to the inevitable and ordered a retreat. Regimental Sergeant Major Hurst (attached to the ILH from the 5th Dragoon Guards) also ignored the flying lead, galloping up and down the whole line of ILH, hat in hand, waving the men away, shouting the order: “Retire! Retire!”

As the lighthorsemen withdrew towards the pom-poms (which had by then caught up), a ‘much agitated’ Woolls-Sampson ordered Captain Brierley to withdraw his guns at the gallop. Before this could be done, however, Major Briggs (‘unperturbed and less excitable than the Colonel’), rode up and countermanded the order. Brierley reported to Briggs: “I know where the Boers are, but they do not know where I am. I propose to come into action, notwithstanding my orders from the Colonel to retire”. Briggs immediately agreed and the guns were moved forwards to a better position. Thanks to the quick thinking of Brierley and Briggs (who each took personal command of a pom-pom), when De la Rey’s horsemen rode into view round the lower western slopes of the hill, clearly moving to attack Babington’s rear:

This sharp bombardment – together with a move against his flanks by the balance of Babington’s mounted troops (under Colonel Raleigh Grey[ix]) – was too much for De la Rey, and he withdrew his Commando, galloping back up the valley. Grey’s troopers pursued the fleeing Boers, but the broken country quickly rendered this ineffective.

Though De la Rey’s men had fled the field, they had nevertheless had much the better of the day. The bodies of just four dead Boers were found, and it was later discovered that another 14 had been wounded in the action. In contrast, the ill-considered rush of the Imperial Light Horse had cost the regiment 18 men killed and 32 wounded, overwhelmingly from ‘B’ Squadron. These numbers included several men of the Imperial Yeomanry who had only recently transferred to the ILH, together with Captain Yockney, Lieutenant Orsmand and Squadron Sergeant Major Sandys (attached to the ILH from the 5th Lancers).[x]

In the thick of the action, Trooper Wright had gone to the assistance of Sandys, who was:

‘huddled against his dead horse, clearly ‘far gone’ but uncomplaining and quite cheerful. “Can I do anything for you, Sergeant Major?” enquired the trooper. “Yes, sonny, a cigarette, if you’ve got one, and then clear off as quickly as you can!”. Some half-an-hour later Wright found the SSM still sitting in the same position, looking quite comfortable, but his gallant spirit had passed’.[xi]

Such was the calibre of the men who built the Empire: little wonder that Kruger’s insane dreams of driving them out of southern Africa came to naught.

Babington visited the ILH camp that evening, addressing the men and declaring that they had: ‘behaved splendidly, particularly under the circumstances; they had had fearful odds against them both in position and numbers’. 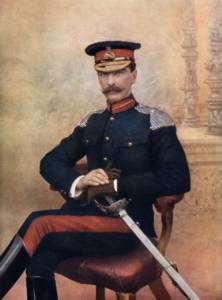 For all his courage, dash and spirit, however, it had become crystal clear that Woolls-Sampson was not suited to command the regiment and was quietly replaced by the cooler, and rather steadier, Major Briggs. To Woolls-Sampson, the conflict was deeply personal, essentially a ‘Holy War’:

‘No one ever questioned his sincerity of purpose. All things to him were clear, either right or wrong – shades of meaning were superfluous. What he believed, he believed implicitly. He might break, but not bend and he carried this rigidity into his dealings with others. He was a warrior first and last, even a Crusader with the strength and the limitations of a Crusader’.[xii]

Such a burning passion – hatred, even – was not always appropriate for the Colonel of a regiment, however, and Woolls-Sampson, who was not a professional soldier, had not been a success in that role, ‘he was proud of his men and had great affection for them, nevertheless his manner of handling them in camp and on the march was autocratic and intolerant, and his methods in the field, when in touch with the enemy, were impetuous and unorthodox’.
Popular perception of the Boer War is full of far-fetched myths of ‘gifted amateurs’ magically proving to be better senior commanders than long-serving, professional , highly experienced career soldiers… unsurprisingly, these are, by-and-large, just myths.

After the debacle at Cyferfontein, Woolls-Sampson took a period of leave in Rhodesia before returning to carry on the fight as an Intelligence Officer – a role in which he absolutely excelled. No less a man than General Ian Hamilton declared that, ‘In one leap [Woolls-Sampson] became the second figure in the war, second only to Lord Kitchener himself’.[xiii]

[ii] Woolls-Sampson (who enjoyed the delightful nickname ‘Sambo’) was an uber-Uitlander and one of the driving forces of both the pre-war Reform Committee which campaigned against Kruger’s blatantly unfair franchise rules, and the Imperial Light Horse which was raised to oppose Kruger’s dreams of driving the British from Southern Africa.

[vi] Later Colonel Brierley CMG, DSO. Brierley commanded a battery of 60-pdrs at the start of the Great War, losing a leg in 1914. This trifle does not seem to have inconvenienced him at all, however, and he cheerfully wrote: “I can now play golf all day, and am the fittest man in England”.

[vii] The Story of the Imperial Light Horse, p.251

[ix] Later Sir Raleigh Grey KBE CMG CVO (1860–1936). Commissioned into the 6th Dragoons (Inniskillings), Grey transferred to the Bechuanaland Border Police and served in the Matabele War of 1893. He later took part in the Jameson Raid, spending time in gaol as a result.