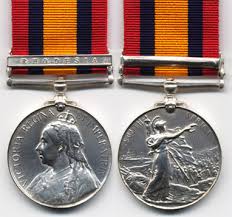 At the risk of enraging pedants, thinking of the Queen’s South Africa Medal as ‘the Boer War medal’ is actually reasonable enough – certainly in comparison with the lesser known ‘King’s South Africa Medal’. Instituted in 1900, the QSAM is by far the more common award: all British and Imperial troops who served in the theatre between 11th October 1899 and 31st May 1902 were eligible for it, as were those troops who guarded Boer POWs on St Helena and even war correspondents. 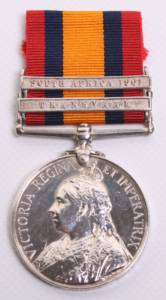 As per Army Order 94 of April 1902, there were 26 official clasps which could be added to the QSAM, and these would be awarded for service in the various battles and campaigns of the conflict:

Two were classed as ‘Date Clasps’:

“SOUTH AFRICA 1901”
This was awarded to all troops who served in South Africa between 1st January 1901 and 31st  December 1901, but who were not eligible for the King’s South Africa Medal

“SOUTH AFRICA 1902”
This was awarded to all troops who served in South Africa between 1st  January 1902 and 31st May 1902 inclusive, who were not eligible for the King’s South Africa Medal

Another five were classed as ‘State Clasps’. These were awarded for service in a particular geographic area, but only if the recipient had not been awarded a ‘Battle Clasp’ for a specific action in that area:

“CAPE COLONY”
Awarded to all troops in the Cape Colony at any time between 11th October 1899 and 31st May 1902 inclusive, but who had not received a clasp for a specific action in the Cape, or the “Natal” clasp

“NATAL”
Awarded to all troops in the Colony of Natal at any time between 11th October 1899 and 11th June 1900 inclusive, but who had not received a clasp for a specific action in Natal or the Cape

“ORANGE FREE STATE”
Awarded to all troops in the Orange Free State (Orange River Colony after annexation) at any time between 28th February 1900 and 31st May 1902 inclusive, but who had not received a clasp for a specific action in the OFS / ORC

The rest of the clasps were classed as ‘Battle Clasps’:

The rarest clasps were ‘Defence of Mafeking’, ‘Wepener’, ‘Defence of Kimberley’ and ‘Rhodesia’, in that order. The most clasps awarded to one recipient was nine, though perhaps more remarkable is that one Royal Navy sailor managed to be awarded eight.

It is also interesting to ponder the actions for which clasps were awarded: for example, Belmont got one, but Graspan did not (though virtually all those who fought at the latter had fought at the former). Indeed, while Belmont got its own clasp, the various actions over the course of a month which culminated in the mass Boer surrender at the Brandwater Basin were all covered by the single clasp, ‘Wittebergen’.
No battles clasps were given for actions after the Battle of Belfast – fought at the end of August in 1900 – despite the war continuing for almost two more years. One would have thought at least some of the various sweeps of the Guerrilla War should have been worth a clasp, though obviously troops who participated in those would be awarded the appropriate date and state clasps.
On the other hand, Driefontein – a battle which, thanks to several decades worth of passionately pro-Boer propaganda, few these days have even heard of – was deemed worthy of a clasp: this should not actually be surprising as it was a crushing defeat for the Boers under General Christiaan de Wet, a man later re-invented as some sort of invincible genius. Imperial troops buried over 200 republican corpses after driving de Wet’s men from their positions – a much greater number than the British fatalities at Colenso, for example. A local farmer also reported ‘a great number’ went un-buried.

It is also interesting to note that clasps were not awarded for defeats such as Magersfontein, Colenso and Spion Kop, though one sometimes comes across ‘unofficial’ clasps for Colenso.

Though Queen Victoria died on the 22nd of January, 1901, the Queen’s South Africa Medal continued to be awarded until the end of the Boer War, almost a-year-and-half later.

With the accession of King Edward VII, a new award was instituted in 1902: the much less common King’s South Africa medal. Designed by G. W. de Saulles (who also designed the QSAM), it was the first medal instituted in the new King’s reign but, so stringent were the requirements for the new KSAM, that far fewer qualified for it. 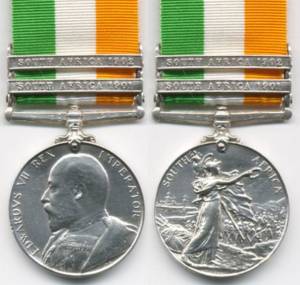 The new medal was authorised by Army Order 232 of 1902, the relevant sections of which stated:

3. Provided the claims are approved by the Commander-in-Chief, the medal, in silver, will be issued to all officers, warrant officers, non-commissioned officers and men of the British, Indian and Colonial forces; the civilian medical practitioners and other employed with military hospitals in South Africa; and to all nursing sisters, as defined in Army Order 195 of 1901; provided that (a) they were actually serving in South Africa on or after January 1 1902, and (b) that on that date they had completed eighteen months’ war service, or subsequently completed such service before June 1, 1902.

4. In interpreting this rule the actual period of absence from duty either at home or in South Africa on account of wounds or sickness directly attributable to service in the field will be allowed to count, to make up the period of eighteen months.

5. The medal will also be granted to officers, warrant-officers, non-commissioned officers and men who have been invalided by reason of wounds received in action prior to January 1, 1902, thereby being unable to complete an aggregate service of eighteen months in South Africa provided they returned and served there for any period between January 1, 1902, and May 31, 1902.

So, in a nut shell, the new medal was awarded only to those troops who saw service in South Africa at some point in 1902, and who had also served for at least 18 months – though not necessarily continuously. As, even with continuous service, the recipient would have had to have been in theatre from the 1st of December 1900 to log 18 months service before the war ended on 31 May 1902. It was clearly impossible to be eligible for the King’s South Africa Medal without also qualifying for the Queen’s South Africa Medal, and the former was indeed never awarded without the latter.

The King’s South Africa Medal thus essentially came to represent ‘long service in the Boer War’, with plenty of such service necessarily having been in the grueling and unforgiving Guerrilla War phase.

The King’s South Africa Medal was always worn on the right of the QSAM: 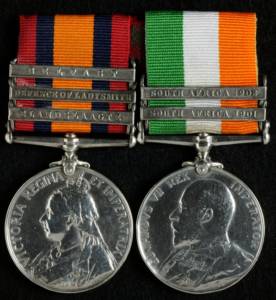 Army Order 232 also stated that only two clasps would be granted for the King’s South Africa Medal:

“SOUTH AFRICA 1901”
This was awarded to all troops who served in South Africa between 1st January 1901 and 31st December 1901, both dates inclusive 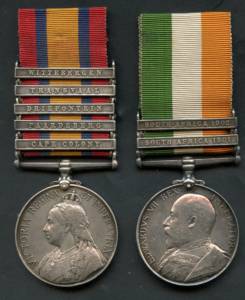 These are obviously the same as the ‘Date Clasps’ which could be added to a QSAM. In the event of a man being awarded both the QSAM and the KSAM, the date clasps were worn on the latter, with all State and Battle clasps worn on the former. Perhaps a little unfairly, nursing staff did not qualify to wear these on their King’s South Africa Medals, and 600 were issued without clasps to these nurses.

Like the Queen’s South Africa Medal, it was 1.5” in diameter, but with a very distinctive ribbon which looks rather like the modern-day Irish flag. The ribbon is said to have been inspired by the colours of the two former Boer republics – the orange for the Orange Free State makes sense; the green and white for the Transvaal perhaps a little less so.

The King’s South Africa Medal is not the only ‘Boer War medal’ which has become a little forgotten over time.
Militia troops who took over from regulars in the Mediterranean garrisons (thus freeing them up for service in South Africa) qualified for the ‘Queen’s Mediterranean Medal’ – this medal and ribbon were almost identical to the Queen’s South Africa Medal, retaining a likeness of Her Majesty on the obverse, though with the words ‘South Africa’ replaced by ‘Mediterranean’ on the reverse: 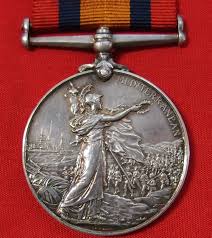 There was also a ‘Transport Medal’ which was also awarded to officers of merchant and hospital ships involved in the Boer War: 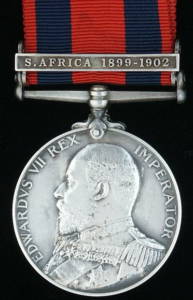 The Transport Medal was not specifically for the Boer War, however, and was also awarded to merchant officers who supported operations in China during the Boxer Rebellion of 1900. Strangely, these were the only two conflicts for which it was awarded. Only around 250 Transport Medals were issued, making it one of the rarest awards.

There were two other ‘unofficial’ Boer War medals: ‘The Cape Copper Company Medal for the Defence of O’okiep’, and ‘The Kimberley Star’.

The former was granted to employees of the Cape Copper Company who served through the brief Siege of the Northern Cape town of O’Kiep (as it is now called) towards the end of the war. When it transpired that non-white company personnel would not be awarded the Queen’s South Africa Medal for their efforts during the siege, the Cape Copper Company minted their own and it was awarded regardless of race. 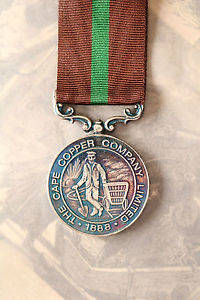 The Kimberley Star was instituted by the Mayor of that town and around 5000 were awarded to men who were engaged in the defence of Kimberley as well as to members of the British Forces in the Kimberley Garrison. 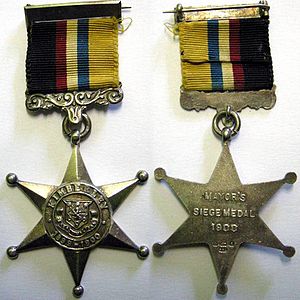 The recipients included, among others, the Kimberley Town Guard, the Kimberley Regiment, the De Beers Maxim Battery, the Cape Police, the Loyal North Lancashire Regiment and the Diamond Fields Artillery. Since the medal did not enjoy official status, however, the military recipients were not allowed to wear the medal in uniform.