“the longest, hardest, guerrilla war ever…”

There is a passionately-held belief among a certain section of South Africans that the Boers were amazing guerrilla fighters, and that they ran rings round the ‘blundering Brits’, leading them a merry dance in one of the longest, most hard-fought wars in human history. Like so many other myths about the Boer War, this is something they have always just somehow ‘known’ to be true – so they see absolutely no need to actually research the assertion, or to pause and think about it objectively. Spewing out such claims no doubt entertains similarly-minded people at braais, and probably helps extremists and bitter, so-called academics sleep at night, but it is not actually based on historical reality, or on an understanding of guerrilla warfare.

For those who do have a genuine interest in military history however, I would draw attention to the chart below (note that the words ‘insurgency’ / ‘insurgents’[i] are used rather than terrorist / guerrilla / freedom fighter etc – this is purely for ease, and implies no political stance): 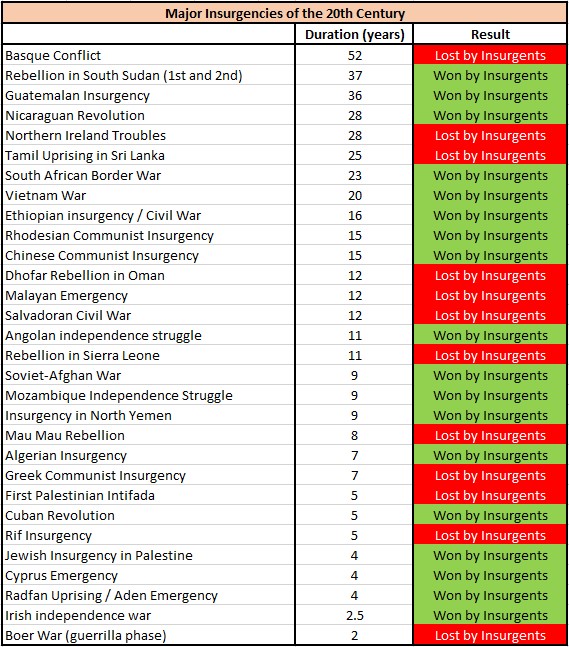 Though it leaves out a couple which have carried over into this century, and is obviously not an absolutely exhaustive list of every single 20th Century insurgency / guerrilla war, it nevertheless covers the major ones. Additionally, it is not always easy to define what was a ‘true’ insurgency / guerrilla war, and what is more accurately described as a civil war[ii]. One can also argue whether a certain insurgency was won or lost, as more than a few had rather ambiguous endings; you will find white South Africans of a certain age who claim they won the Border War, for example, but the undeniable reality is that Namibia became independent in 1990 – and thus SWAPO achieved their objective. Equally, the Portuguese claimed ‘military victory’ in Mozambique… but lost control of the territory nonetheless.

The real stand out from the chart, however, is just how long counter-insurgencies / guerrilla wars tended to drag on for during the 20th Century[iii] – and just how short the guerrilla phase of the Boer War was in comparison.

Far from ‘taking such a long time’ for the Imperial forces to ‘eventually’ defeat the Boer terrorist campaign, as we are repeatedly assured by the sheep-like True BelieversTM, the guerrilla phase of the Boer War actually lasted for less than a quarter of the average length of a counter-insurgency in the 20th Century[iv]. As well as being much shorter than the average, it was also – and despite the ghoulish myths and ludicrously baseless claims of ‘genocide’ – won in a less ruthless manner than most, as Professor Michael Howard observed in 1971:
‘seventy years’ further experience of insurgency and counter-insurgency in warfare may lead us to wonder, not that Lord Kitchener’s pacification campaign took so long and involved some incidental brutalities, but that it did not take still longer and involve yet more’.[v]

Furthermore, it is worth noting that, of the wars listed above, the Boer War is one of the very few in which the ‘government’ forces did not enjoy any significant technological advantage over the insurgents / terrorists – no air power, helicopters, armoured vehicles etc. Additionally, and though a certain type of commentator loves to squeal that the British only won because they ‘vastly outnumbered the Boers’, one should note that, in reality, Lord Kitchener did not have anything approaching the number of troops which, based on more than century of data, the US Defense Department today considers necessary to fight and win a Counter-Insurgency campaign[vi].

Of course, seeing just how quickly the Boer War was won when compared to other such conflicts will not please Defenders of the MythTM, but they really need to let go of their comforting Apartheid-era propaganda, and their laughable (brandy-fueled) myths of Boer invincibility. If they instead actually took the time to study how the Boer War fits into the bigger picture of 20th Century counter-insurgency / terrorism campaigns and guerrilla wars, they would be left pondering two – rather inconvenient – questions:

– Was the war won so quickly because the Boers were especially inept guerrilla fighters?

– Or was the British army of the period an exceptionally good counter-insurgency force?

[ii] The war in Yugoslavia in the 1990s, the Biafran War, the Angola Civil War, and the various wars in the Congo are examples. The Indonesian Confrontation is another conflict which is rather difficult to define. These are all omitted from the chart, but all lasted longer than the guerrilla phase of the Boer War in any case.

[iii] One should note that, even today, the Insurrection in South Thailand is still rumbling on after 18 years, the rebellion in Somalia has been going since 1991, and the Colombian Insurgency is now into its 58th year – suddenly the two-year-long guerrilla phase of the Boer War looks like the blink of an eye.

[v] Quoted in the paper, Thomas Pakenham and The Boer War, a fresh look after thirty years