This is the sort of thing that True Believers like to send one another: 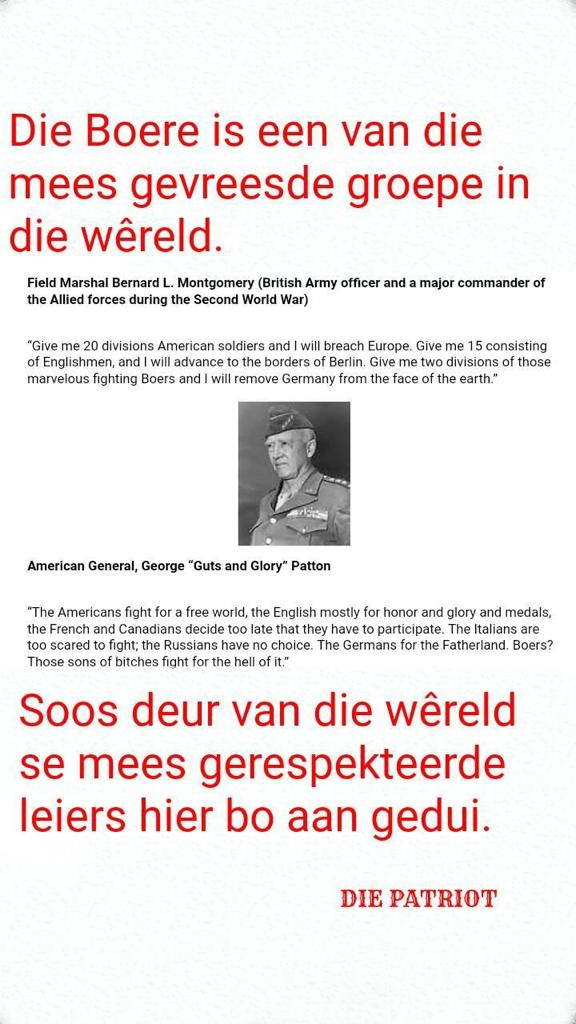 Needless to say, none of this utter nonsense is referenced, and there is zero evidence that either quote is genuine.

Given that Montgomery made his name in the North African Campaign of WW2, and that it was a South African Division which surrendered Tobruk, it would be remarkable for him to admire them above all other Empire forces. More than this, about two divisions worth of those (ahem) ‘marvelous fighting Boers’ invaded Natal in 1899, and couldn’t even take Ladysmith, let alone the entirety of that small colony… so why on earth would a commander as astute as Montgomery think they could have even taken Berlin, never mind ‘remove Germany from the face of the earth’?

Christ, those ‘marvelous fighting Boers’ took six weeks to take tiny Kuruman despite outnumbering the garrison 10:1, and utterly failed to capture Mafeking, Ladysmith, Kimberley and Wepener…. but we are asked to believe that Montgomery felt Germany would have been no issue for them, apparently. How stupid do you have to be to believe this hogwash?

And as for the supposed Patton quote, do none of these True Believing idiots stop to think that both France and Canada joined WW2 over two years before the US did? With this pointed out to them, perhaps they can explain the ‘decide too late that they have to participate’ aspect?

Funnily, and though allegedly keen to fight ‘for the hell of it’, none of those ‘marvelous fighting Boers’ could even be persuaded to fight in the defence of their national capitals. While Imperial troops fought tooth-and-nail to defend the likes of Kimberley, Ladysmith and even little Kuruman, there was no siege of either Bloemfontein or Pretoria. As soon as Roberts arrived, and the war turned against them, those ‘marvelous fighting Boers’ either surrendered in their thousands, or just carried on trekking.