‘Those who do not learn history…’

One of the fundamentals of military strategy is to pursue a clearly defined objective, or ‘main effort’. Diversionary attacks should be no more than that – ie. operations to divert the enemy’s attention from the main effort. They become counter-productive should they start to draw significant friendly fighting power and logistical support away from achieving the primary objective. 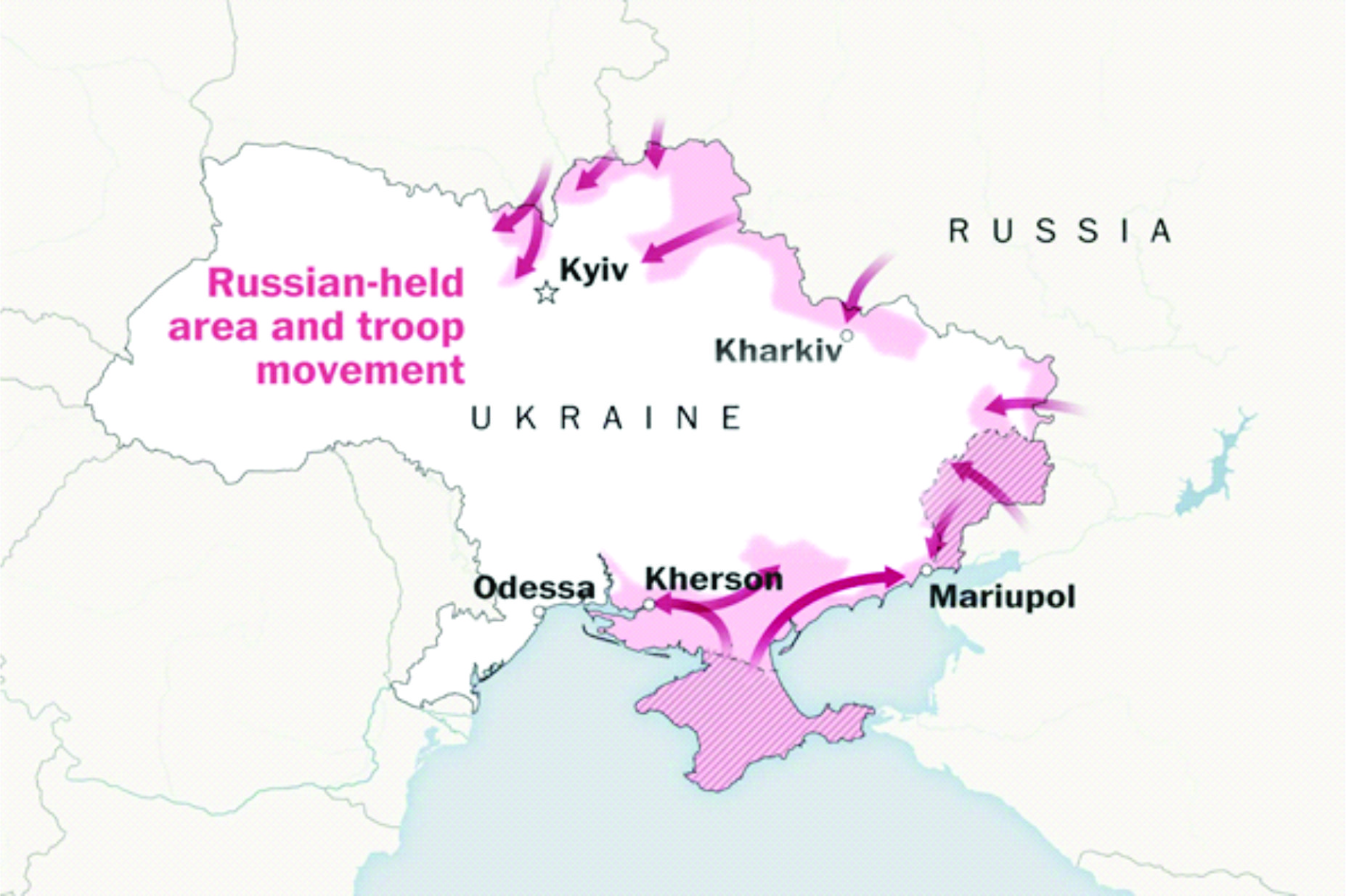 We watching in real time how not to invade a nation, as the Russian army flails ineptly in the Ukraine, trying to do half-a-dozen things at once, and failing at them all. It was insanity to mount operations against Kiev, Kherson, Kharkov and Mariupol, while simultaneously attempting to support an advance north out of the Crimea.

Logically, the Russian army’s best chance of success was to focus their attentions in the east, and capture the Donbas Region where they could have expected support from the pro-Russian section of the population therein. Putin’s best chance to achieve this was to have three or four weeks of an air campaign to both establish air-supremacy across the whole of the Ukraine, and then target Ukrainian forces, roads, bridges and suchlike, so as to prevent reserves moving to the region.

This would then be followed by a concentrated push west into the Donbas and SW against Mariupol, so as to establish a land corridor between the Crimea and Russia-proper: ie. a clearly defined objective, which would have allowed concentration of his forces, take advantage of the sympathetic section of the population therein, and greatly simplify logistics (something the Russian army seems particularly poor at).

Indeed, had Moscow made it clear to the spineless EU and UN – and with a bewildered and geriatric President in the White House – that Russia ‘only’ wanted to capture this portion of eastern Ukraine, it is not hard to imagine Biden, Macron et al seeking to force a peace on the situation as soon as the invasion was successful; anything to ensure Russian oil and gas kept flowing into the EU. Putin could have then consolidated for another few years, then manufactured another excuse to snatch a bit more of the Ukraine.

Instead, by trying to do everything at once, and by ridiculously over-estimating the combat power of their forces, the Russian invasions have been a total fiasco, and the smart money is now on a mutiny, or a military coup to topple Putin.

Over 120 years ago, another corrupt oligarch, President Paul Kruger, made similar mistakes to those of Putin. He too considered his men to be far better warriors than his enemy, and convinced his supporters that the land they were going to invade was somehow theirs anyway, crowing about building an Afrikaans Empire ‘from the Zambesi to the Cape’.

Though the invading republican forces significantly outnumbered Imperial troops in southern Africa, they too were split up as Kruger tried to invade everywhere at once: Natal, the Cape, British Bechuanaland, Zululand and even Rhodesia. Though large areas of British territory were indeed captured (see below), the haphazard, ill-conceived nature of the invasions meant that virtually nothing of significance was achieved before the Boer invasions petered out in the face of imperial reinforcements. 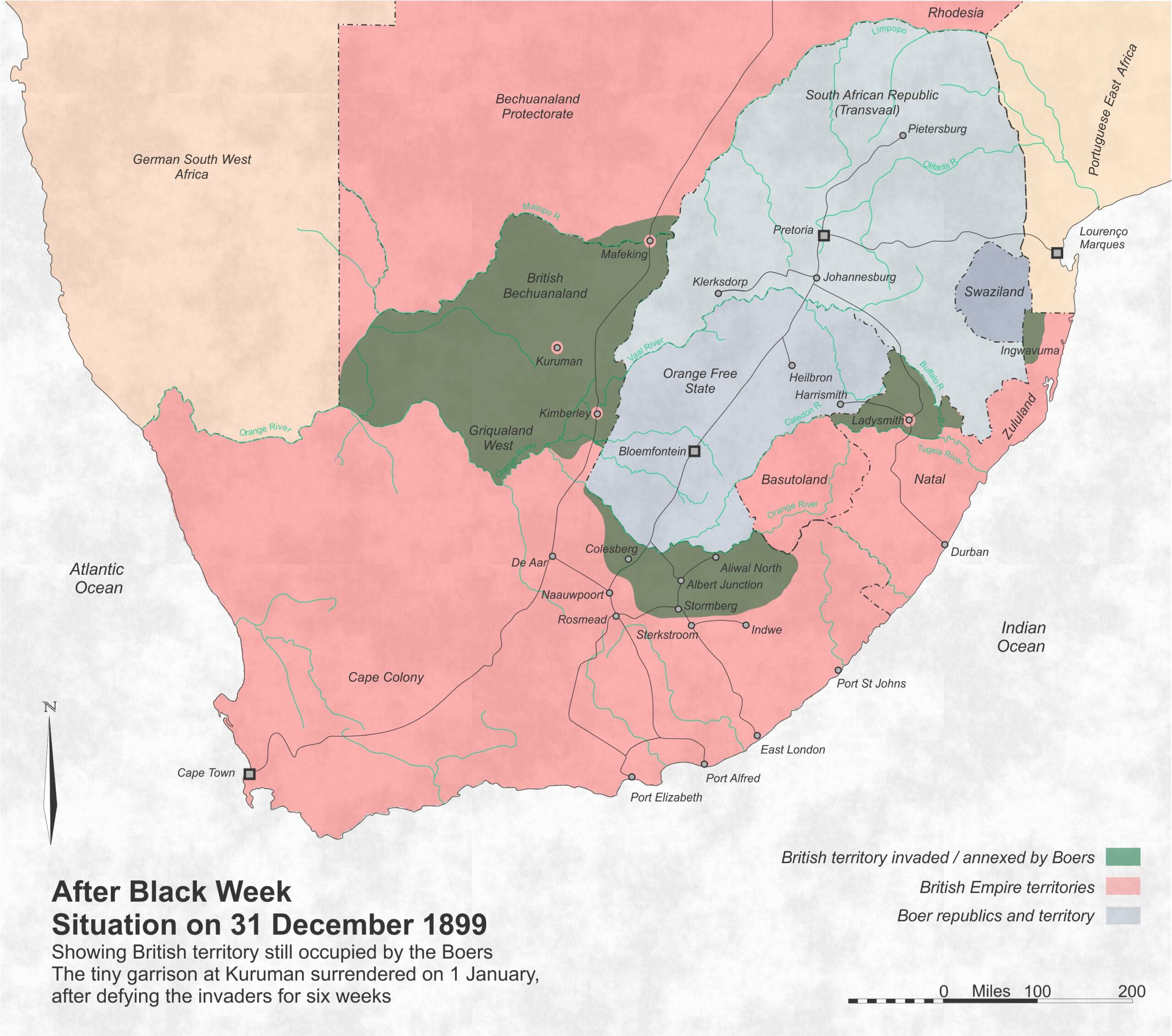 Unless – as Kruger sincerely believed – the vengeful God of the Old Testament was going to pop-up, and shatter the British army with a volley of well-placed thunderbolts, then the only possible chance that Kruger’s invasions could be successful was instead to have focused his main effort on an invasion of the Cape Colony. Scratch forces could have covered the mountainous border with Natal, while some 40,000 well-armed, well-horsed and aggressively-led Boers poured into the Cape, seeking to spark an uprising from the large Afrikaans population therein.

With the lion’s share of the pre-war British garrison stuck up in Natal, it is interesting to ponder how far these invading forces could have got, and how many thousands of Cape Afrikaners might have rallied to their banner, especially if a significant town was taken. Could it just have been possible that a general uprising against British rule might have occurred, and the long-dreamed-of ‘Third Boer republic’ established? Improbable, perhaps, but certainly a much better bet than instead invading everywhere at once, and achieving nothing.

Luckily, and just like Putin’s gang, Kruger’s clique had no concept of pursuing a clearly defined objective, and no idea what a main effort was.

EDIT:
As my understanding of the War in Ukraine has been doubted by some sort of entertaining village idiot, here is an extract of an interview with General Petraeus (US Army 4-star General who led Coalition Forces in both Iraq and Afghanistan, before being appointed Director of the CIA), which featured in the Spectator magazine:

‘…you can’t give Russia anything but a failing grade. Russia has realised that by attacking everything they attack nothing, and therefore have achieved very little so far. They appear to have withdrawn just about everything that they had in the north and north-east. The Russian command, control and communications have failed, too. That’s why generals have to go up to the front, where they get killed by these very skilful Ukrainian snipers. I’d give an ‘incomplete’ grade on what Russia is seeking to accomplish now: shifting focus to the south-east, trying to reinforce the one area in which they’ve had a modest degree of success. Then they’ll attack to the south-west and perhaps even try to trap some of the Ukrainian forces that are defending against the Russians coming out of the Donbas.’

Hmm – pretty much exactly what I said…