‘Mafeking: the mustering point for an invasion’

For a long time, I thought this was the only Mafeking-related joke, but I recently heard another. During a discussion on the formation of the Boy Scouts, and how they trace their origins to the Siege of Mafeking, someone popped up to sagely – and very amusingly – declare:

Just as a point of information, Kruger’s Boers only attacked Mafeking because the British were demanding they yield to the British Empire. Mafeking was a railway town and had been chosen by the British as the mustering point for an invasion of the Boer republics

Needless to say, these outlandish claims piqued my interest, so I responded thus:

Let me guess… that’s why the Boers annexed the entirety of British Bechuanaland and laid siege to Kuruman too? That’s why they annexed parts of Zululand? That’s why they looted and changed the names of the towns in Natal they captured?
It was an invasion, pure and simple, and Kruger had been working towards it since at least as early as 1887.
In stark contrast the British, as was found at the post-war Royal Commission, had no plan in place for war, so Mafeking had certainly not been ‘chosen as the mustering point for an invasion of the Boer republics’, and – aside from the indomitable “B-P” and a handful of officers – no regular troops were stationed there.

Undeterred, he popped back up again, not to actually answer any of these questions, of course, but instead to blame everything on the Bogey-Man du jour:

Ever heard of Cecil Rhodes? The British may have made no official plans but that was because Rhodes was doing their work for them unofficially. The Boer Republics were in the way of his Cape to Cairo dream.

A ridiculous claim, which prompted the following response from me:

You will note that Kruger was planning his invasions at least three years prior to Rhodes becoming PM of the Cape, and launched them almost four years after he had to resign.
I also note you did not answer my questions; do please explain how Kruger’s annexation of British Bechuanaland, the lengthy siege of the lonely, one-horse dorp of Kuruman, the annexation of parts of Zululand, and the looting and re-naming of towns in Natal by the invading Boers fits into your version of events.
I further note you now admit there was no British plan in place to invade the republics. One is left to wonder why you earlier claimed Mafeking had been ‘chosen as the mustering point for an invasion of the Boer republics’… an invasion you now admit hadn’t been planned at all.

Alas, at this point my entertaining interlocutor scuttled away to lick his wounds (or perhaps it was past his bedtime?), so we shall perhaps never know why he pretended that the dusty, remote little outpost of Mafeking was some sort of critical lynchpin in a nefarious (if mythical) British masterplan to invade the poor, innocent republics.

As he (rather bizarrely) appeared quite happy to accept, the biggest flaw in his argument is that, in 1899, the British army lacked any sort of plan for war in South Africa. In fact, and as even Pakenham admits, this was one of the more remarkable findings of the post-war Royal Commission: quite simply, there was no plan in place to invade the two Boer republics[1]. As The Spectator thundered incredulously in August 1903, the report was so damning as to be:

‘surely one of the most amazing documents to which a General can ever have had to sign his name. Not only had there been no preparation for the Boer War, but there had been no preparation for any war of any kind whatever. Every arrangement that was made seems to have been made on the supposition that the British nation, even three weeks before the Boer commandos marched into Natal, was about to enjoy the blessings of eternal peace.’

So quite what inspired this fellow to pretend that Mafeking had been selected as ‘the mustering point’ for an invasion which hadn’t even been planned, remains a mystery.

Nevertheless, based on his outbursts, and as he seems to have vanished, I thought it would be fun to take a moment to look at the practicalities of using Mafeking as ‘the mustering point’ he claimed. It quickly becomes apparent that, not only is it clear that this fellow is someone with no military background, but he also lacks the ability to read a map – as it would be hard to think of less suitable ‘mustering point’ for a major invasion.

Here is a map of South Africa in 1899, prior to Kruger’s invasions of British territory, with Mafeking marked: 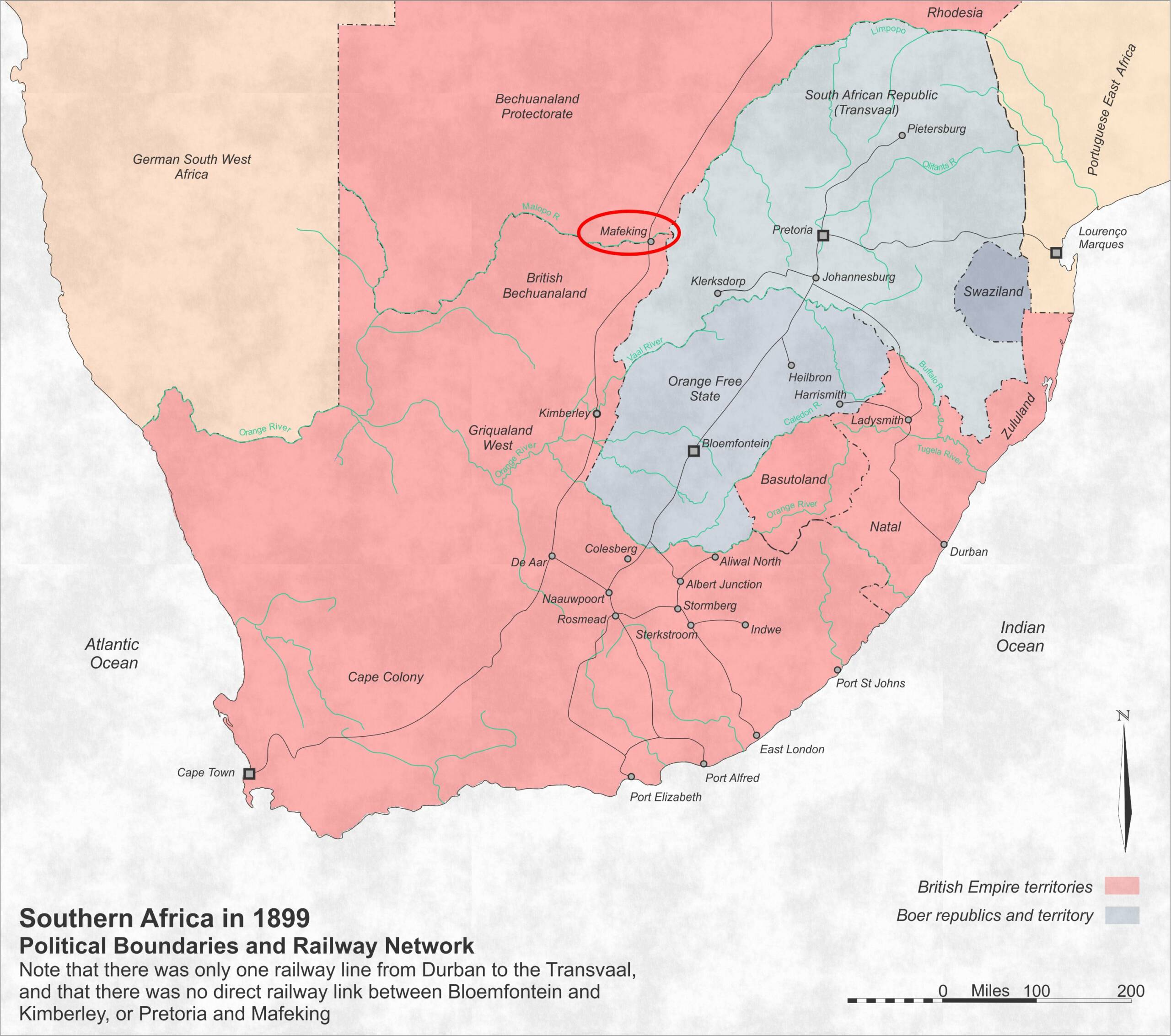 In terms of being ‘the mustering point for an invasion of the republics’, about the only thing Mafeking has going for it is that it is very close to the border of the Transvaal.

Counting massively against it, however, is the fact that the railway line back to De Aar and Cape Town (where all troops, supplies, fodder and ammunition would have to come from) runs for much of its length along the border of the Orange Free State and the Transvaal, making it incredibly easy for Boer raiders to cut, thus shattering the logistical tail of any invading force at a stroke: 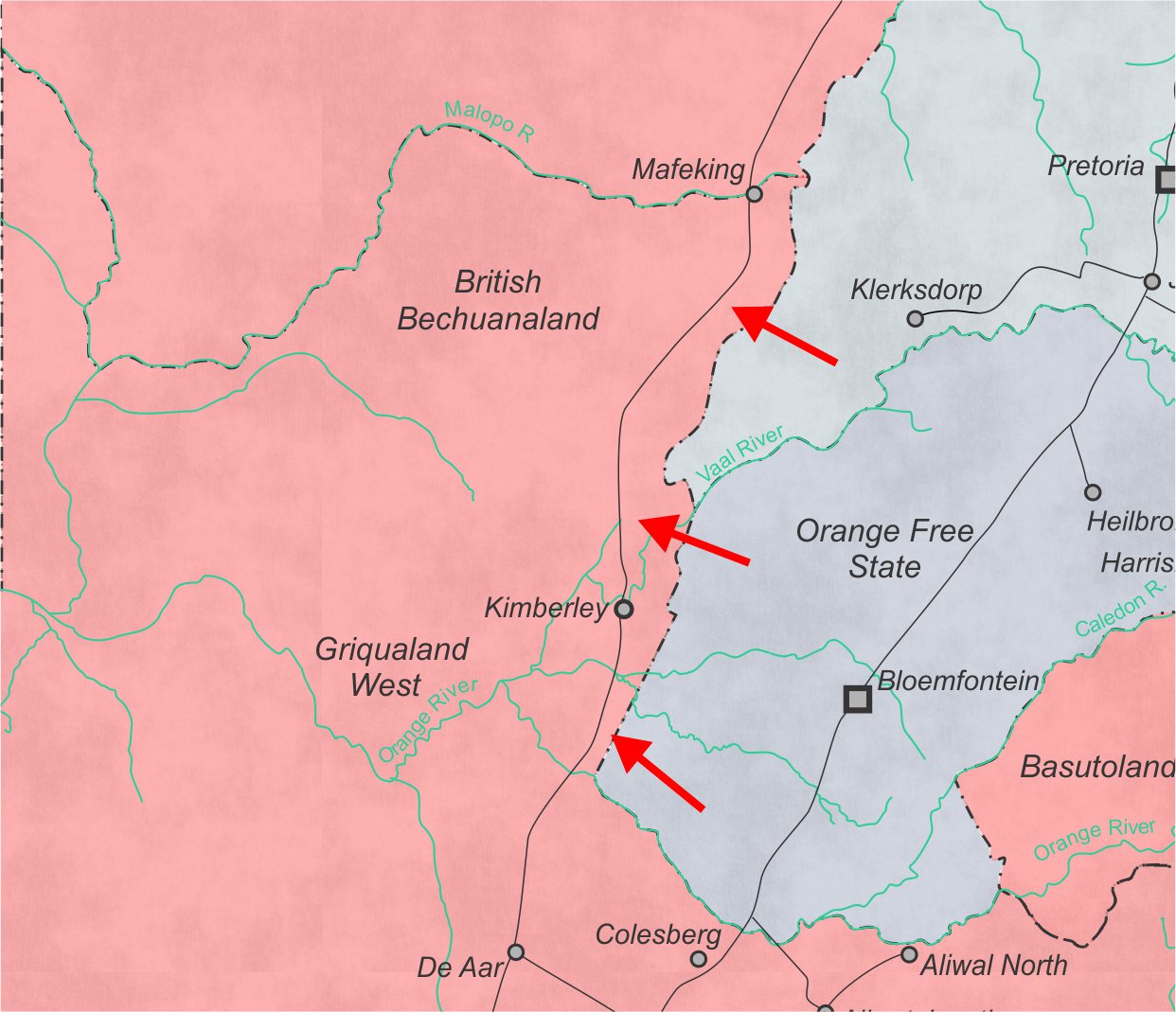 Worse still, the railway from De Aar, through Kimberley and Mafeking, only headed northeast to Rhodesia. Pretoria was some 200 miles due East: there was no connection from Mafeking to the two Boer republics, and thus no railway available to support an invasion into either of them: 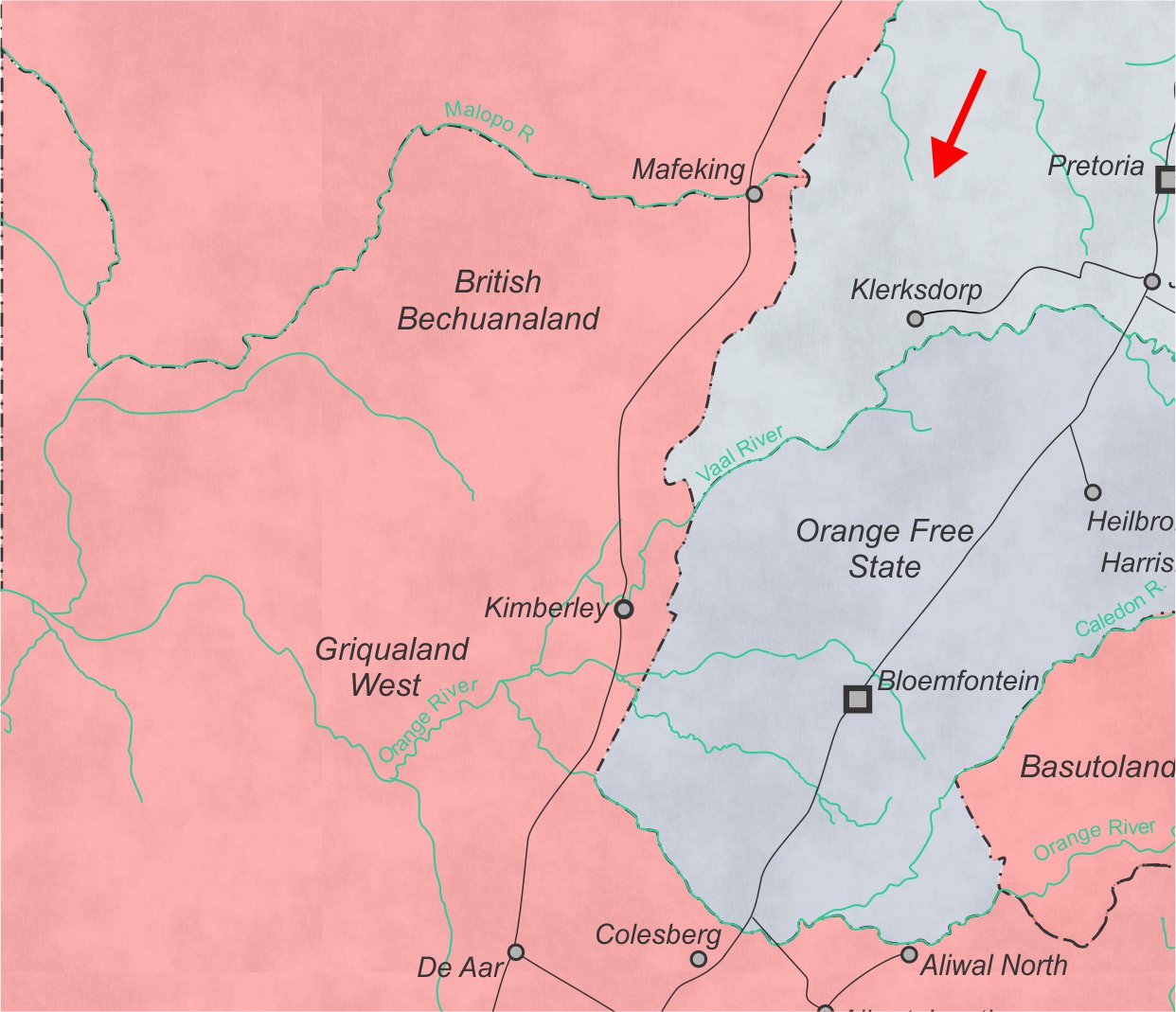 A few years earlier, the Jameson Raid had indeed been launched from Pitsani[2], only some 15 miles to the north of Mafeking, but that had (somewhat farcically) been conceived as a lightning raid by a few hundred light horsemen, hell bent only on getting through to Johannesburg. Nevertheless, their supporters in the Transvaal had arranged clandestine supply dumps of rations, fodder, and water along their route, though these proved to be totally inadequate, even for such a small force.

A full-scale invasion, involving tens of thousands of troops and horses, and hordes of ravenous oxen dragging dozens of guns and hundreds of wagons, was a totally different prospect; it could only be adequately supplied by a railway line, and thus a sustained, general advance could only be mounted along one. The fact that Buller’s liberation of Northern Natal[3], and Roberts’ invasion of the Orange Free State and Transvaal, were both tied to railway lines demonstrates the critical importance of these supply arteries at the time.

Using French’s hard-riding Cavalry Division, Roberts did brilliantly deviate from this to cut off Cronjé at Paardeberg[4], but then quickly struck east, back towards the railway line at Bloemfontein. After defeating the Boers at Poplar Grove and Driefontein, and capturing the capital of the Orange Free State, Roberts then had no choice but to pause for around six weeks to reorganise and refit his units, and repair the railway line and bridges back to his supply head in the Cape. Only then, could Roberts continue his advance up the railway, marching on Pretoria, as shown on the map below: 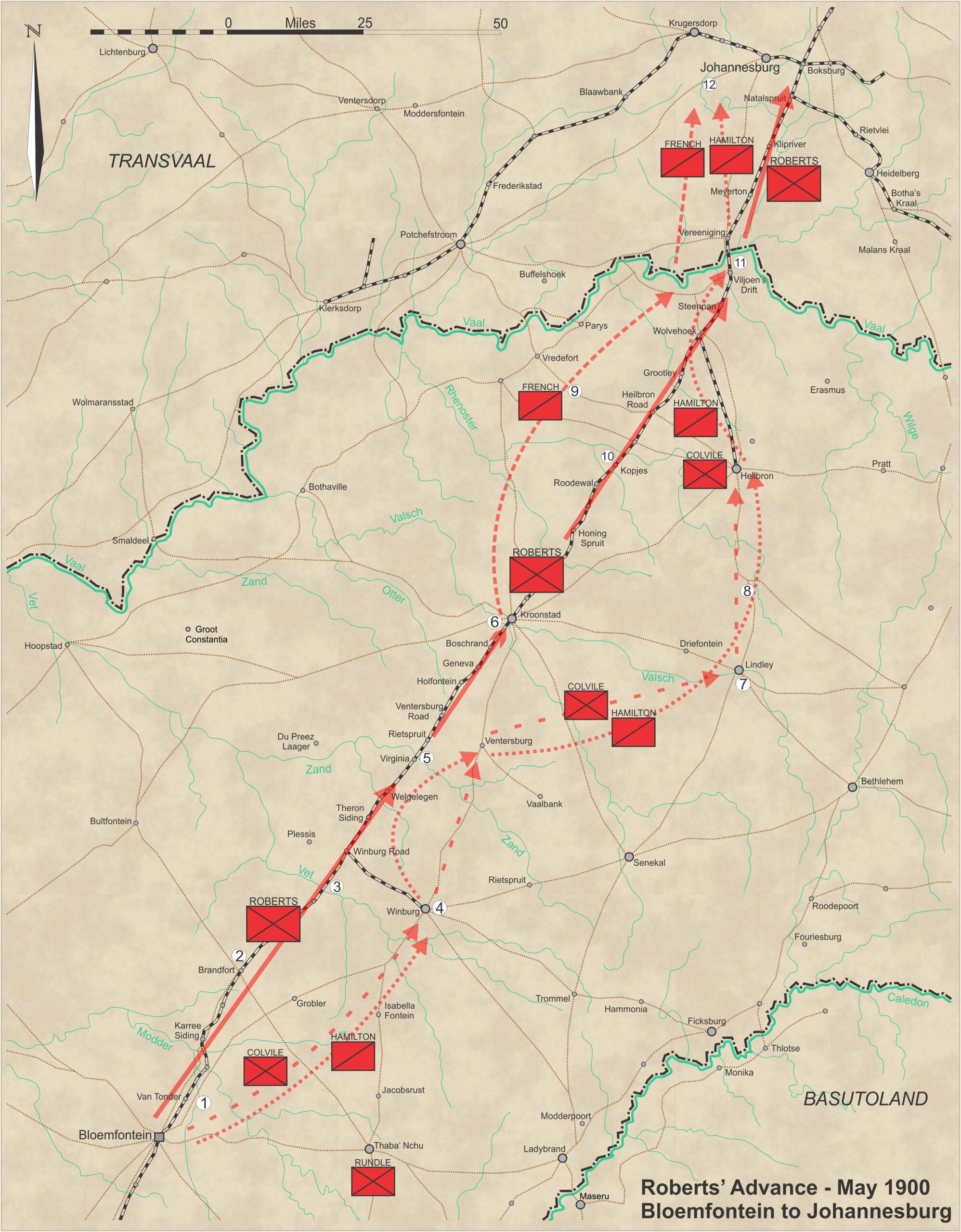 And far from being ‘the mustering point for an invasion of the republics’, in reality, Imperial forces in the Mafeking area were woefully weak. As war loomed, the now-famous Colonel Baden-Powell had been sent to the region to raise two irregular regiments to try and defend the frontier: the Protectorate Regiment was hastily-raised in Bechuanaland, and the Rhodesia Regiment in Bulawayo. It had been a difficult task, however, as good men did not want to lose their jobs on the off-chance of war, so the regiments initially attracted ‘loafers and wasters’.[5] When the Protectorate Regiment’s 447 soldiers were listed by their previous professions, they included ‘26 farm-workers, 16 carpenters, 16 decorators, 18 diggers, twelve engine drivers, eleven storemen, twelve masons, ten electrical engineers; and among the others two jockeys, two vets, one tripe dresser, one male nurse, one florist, one hair dresser, one riding master and several musicians’.[6]

When a Boer invasion became inevitable, Baden-Powell moved the Protectorate Regiment (under Lt. Colonel Hore) into Mafeking. The newly-raised unit formed the bulk of the garrison, and was supported only by elements of the (Rhodesian) British South Africa Police, some men of the Cape Police, a town guard, and four obsolete 7-pdr guns. Baden-Powell was in overall command in the town, but such was the lack of any real planning for war by the British, that his requests for a battery of 12-pdr guns to be sent up from Cape Town was denied[7]. This alleged ‘mustering point for invasion’ could only boast two dozen members of the regular British army. 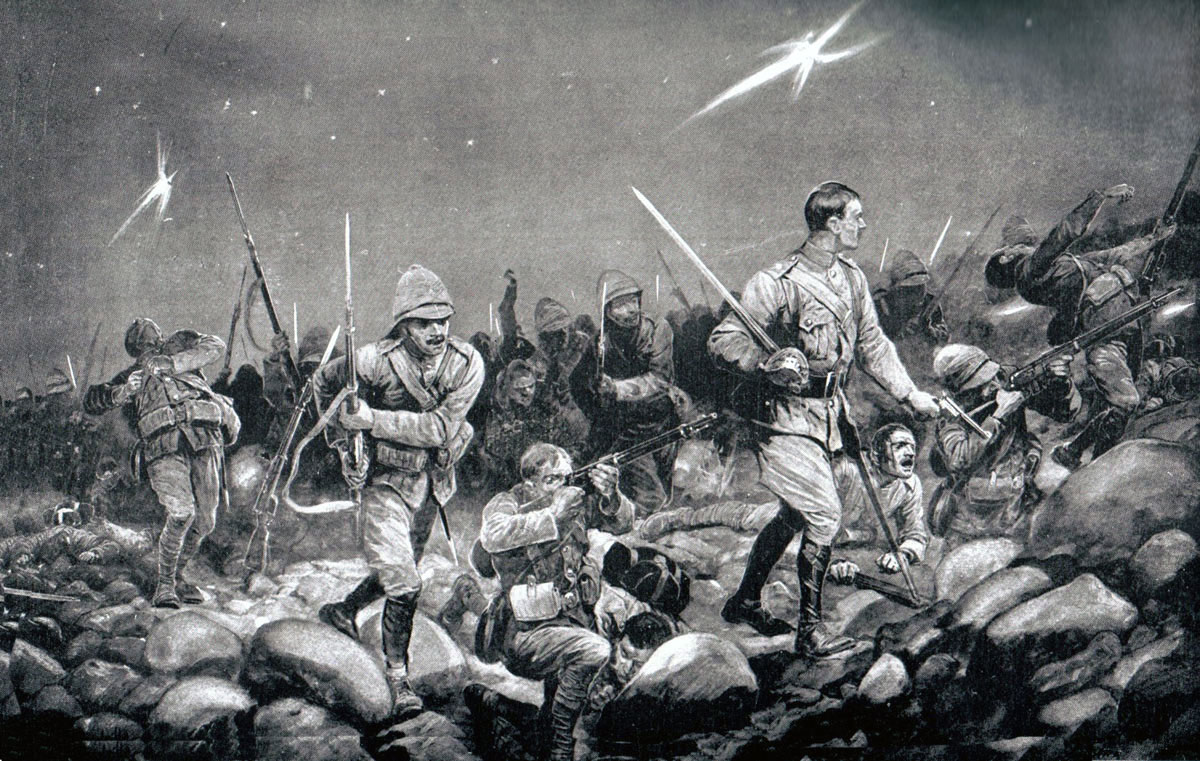 Further to the north, the other unit raised by Baden-Powell, the Rhodesia Regiment, under Lt. Colonel Plumer,[8] was tasked with patrolling a lengthy portion of the frontier in such a manner as to mislead the Boers into believing this small force was far greater than it actually was. Thus, when the war began, the only troops standing between the federals and an invasion of Rhodesia were the 450 men of the recently-raised Rhodesia Regiment. It is testimony to Plumer’s constant, aggressive patrols that the Boers were fooled into thinking he actually had 1,400 men under his command. So successful was this deception, that it was not until 2 November that the republicans unsuccessfully attempted to invade Rhodesia (though no doubt that was somehow Cecil Rhodes’ fault too).

Indeed, rather than pretending that Mafeking was ‘the mustering point for an invasion’, most of Baden-Powell’s latter-day critics have instead claimed exactly the opposite, and declared it a completely valueless settlement, and thus it was pointless of Baden-Powell to defend it. This too is unreasonable criticism, as Mafeking was the administrative centre for the Bechuanaland Protectorate and the north-eastern region of the Cape Colony, and contained valuable railway stock.[9] Just as importantly, the administrator of Rhodesia, Sir Arthur Lawley, had warned that if Mafeking was lost, the tribes of northern Bechuanaland, and the Matabele, would rise in rebellion. If that was not justification enough, every day that several thousand Boers wasted their time at Mafeking was a day they were not striking for the Cape.

This is why the remote, dusty, little outpost had to be defended at all hazards, not because of some bizarre claim of it being the launchpad for an invasion which hadn’t even been planned, and couldn’t conceivably have been mounted from Mafeking; as the saying goes: ‘Amateurs study tactics, armchair generals study strategy, but professionals study logistics’. A major advance from Mafeking was simply not logistically feasible.

If one knows absolutely nothing about a given subject, why pop up in a discussion to demonstrate that ignorance? As another old saying goes, ‘better to remain silent and be thought a fool, than to open your mouth, and remove all doubt’.

[2] Jameson and his Rhodesians set off from Pitsani, which is on the border of modern-day Botswana. They RV’d with a contingent of the Bechuanaland Border Police at Malmani (now called Ottoshoop) which had ridden out from Mafeking to join the ill-fated expedition. Pitsani is marked as ‘Pitsane’ on modern maps, and is not to be confused with the ‘Pitshane’ which is also on the border of Botswana, a little to the west of Mafeking

[3] Buller did detach brigades as required to outflank the various Boer defence lines, but the main axis of advance was always up along the railway

[4] The master-stroke at Paardeberg was only possible because Roberts was able to gather enormous amounts of supplies and ox-wagons at Belmont in the weeks before he launched his move – a build-up which was totally undisturbed the Boers who sat idly after their victory at Magersfontein, enjoying something akin to a jamboree

[8] Later Field Marshal Herbert Charles Onslow Plumer, 1st Viscount Plumer GCB, GCMG, GCVO, GBE (1857–1932). Plumer had served with distinction in the Matabele War of 1896 and would go on to command the British Second Army in the First World War