125 years ago today: the shortest war in history

In June 1890, HM Government had declared a Protectorate over the island of Zanzibar, with one article of the agreement stating that the British Consul would have the final say in the accession of the Sultan.

When the pro-British Sultan, Hamad bin Thuwaini, died on 25 August 1896, the Imperial-resident announced that the choice as his successor would be Hamud bin Muhammed. Unfortunately, the late-Sultan’s nephew, a fellow called Khalid bin Barghash, considered that he had a better claim to the throne, and declared himself the rightful successor. It was suspected that bin Barghash had assassinated his uncle, and he tapped into the discontent felt by many of Zanzibar’s Arabs, over Britain’s banning of the domestic slave trade, and their resultant loss of income.

London was certainly not going to stand for such nonsense from this little upstart, and issued an ultimatum, ordering bin Barghash to relinquish the position of Sultan and demobilise his forces. Instead, bin Barghash gathered his followers at the palace in Stone Town, and made the rather foolish decision to defy the British Empire. 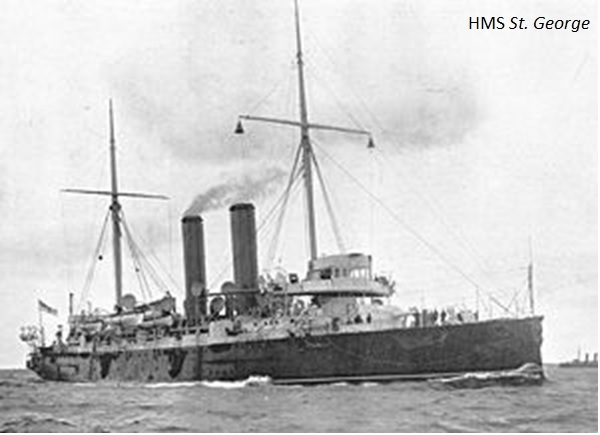 It was reckoned that bin Barghash could call upon some 2,800 men (a number which included many slaves) with four guns. The rebels also manned an armed Royal Yacht, a vessel rather improbably called the HHS Glasgow[1]. Britannia very much ruled the waves in those days, however, and the Royal Navy quickly gathered a flotilla comprising a pair of armoured cruisers (HMS St. George[2] and HMS Philomel[3]), a smaller ‘torpedo cruiser’ (the HMS Racoon[4]), and a pair of gunboats (HMS Thrush and HMS Sparrow[5]). The ships disembarked around 150 Royal Marines and Blue Jackets, a force which supplemented a thousand or so loyal Zanzibari Army Askaris under Lt. Raikes[6] of the Wiltshire Regiment (on secondment to the Zanzibar Army, with a local rank of Brigadier). Raikes’ contingent also manned a pair of Maxims and a 9-pdr, and proved themselves to be steady, well-drilled troops.
The RN squadron was under the command of Rear Admiral Harry Rawson[7], while the loyalist land forces were commanded by Brigadier Mathews, who was the First Minister of Zanzibar. 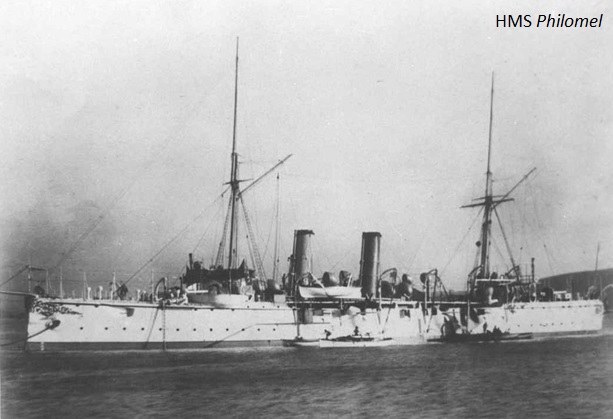 Between 0800 and 0855 on 27 August 1896, a few messages were passed between the would-be Sultan and the British commanders, but no surrender was forthcoming from the rebels. At 0855, Admiral Rawson, having had more than enough of this tomfoolery, ordered his flagship to display the signal for ‘Prepare for Action’.

Though some accounts vary by a minute or two either way, it is generally accepted that the ‘war’ commenced at 0902 hours, with the cruiser HMS Racoon, and the gun boats HMS Thrush and HMS Sparrow opening fire on the palace complex and other rebel positions. The opening salvo blew up one of the rebels’ artillery pieces and the cowardly bin Barghash immediately fled, leaving his men to their fate. The HHS Glasgow – which mounted 9-pdr guns and a Gatling – was swiftly blown to pieces by a broadside from the cruiser, HMS St. George, and quickly sank, the tips of her masts remaining visible in the shallow waters of the harbour as she settled on the bottom. HMS Thrush also sank a couple of rebel steam launches after their crews sportingly, if rather stupidly, opened fire with rifles. 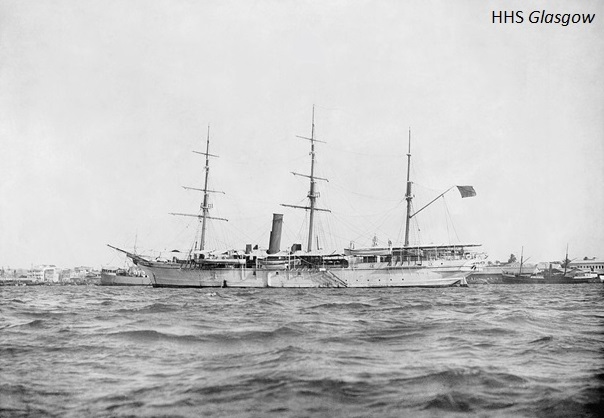 Under the cover of this bombardment, Raikes led his loyalist Askaris forwards through the streets of Stone Town. They skirmished their way towards the palace and harem complex, coming under desultory fire from the defenders as they advanced. Abandoned by their chicken-hearted ‘Sultan’, and under heavy naval gunfire, the rebels, however, had had more than enough.

By 0940, the ‘war’ – the shortest one in history[8] – was over. The palace (and attached harem) was ablaze, the rebels’ guns had all been knocked out, and their flag was struck in surrender. In the 38-minute war, the British and loyalist forces fired some 500 shells, 4,100 machine gun rounds, and 1,000 rifle rounds. It was reckoned about 500 rebels (including non-combatants caught up in the shelling and resultant fires) were killed or wounded. Imperial causalities were just one sailor wounded. 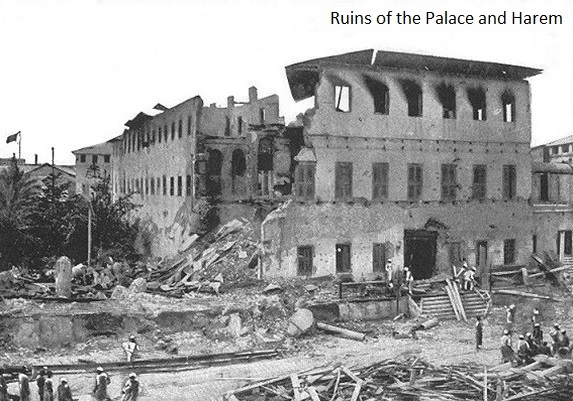 With the rebellion crushed, and the war won in half the time it takes to roast a chicken, peace returned to Zanzibar and the pro-British Hamud bin Muhammed was duly installed as Sultan. The scheming bin Barghash and about forty of his confederates sought refuge at the German consul, and then fled to German East Africa (modern-day Tanzania). The wannabe-Sultan was only finally captured by British forces in 1916, and sent off to exile. 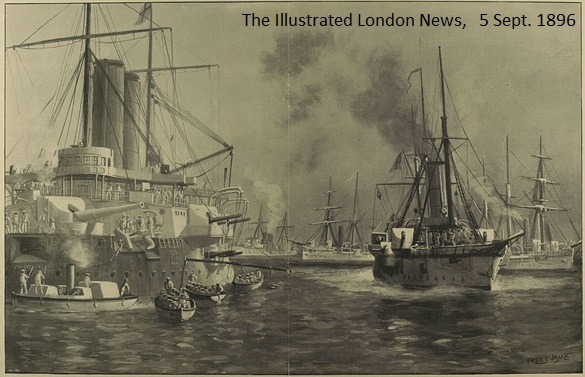 Though no doubt this ‘gunboat diplomacy’ sounds terribly frightful and shockingly ‘Imperialistic’ to modern-day ‘right-on’ woke types, liberals, hand-wringers, social justice warriors, and other such idiots, in reality the result was highly beneficial: within months of the war, and under British instruction, Sultan Hamud bin Muhammed abolished the age-old practice of slavery in all its forms, and the remaining 67 years of the British Protectorate over Zanzibar were peaceful.

Of course, in today’s enlightened times, rather than a short, sharp, highly effective war, the response to such a rebellion would be for meaningless protest marches through Western cities, petitions which no one will ever read, and lots of virtue signaling, silly badges and ‘profile overlays’ on Social Media. Various world ‘leaders’, despots and dictators would talk endlessly at the UN, blethering on about sanctions, and quietly demanding bribes in return for voting in support of pointless resolutions – none of which actually ever achieve anything.

[1] Apparently, the then Sultan of Zanzibar had been greatly taken by a visiting RN frigate, the HMS Glasgow, and had commissioned a copy of her. Launched in 1877, the resulting ‘HHS Glasgow’ displaced 1,416 tons and mounted seven 9-pdrs and a Gatling gun.

[3] HMS Philomel was a Pearl-Class cruiser, launched in 1890. She was much smaller than the St. George, replacing some 2,575 tons, and mounted 8 x 4.7” Quick Firers, 8 x 3-pdrs, four machine guns and a pair of torpedo tubes. She was later transferred to the Royal New Zealand Navy and served in the First World War.

[6] Arthur Edward Harington Raikes (1867-1915) was commissioned into the Wiltshire Regiment, and took up a position as a Brigadier in the Sultan of Zanzibar’s army. After the war of 1896, Raikes was promoted to the Commander of the Zanzibar armies and later served as acting Prime Minister and then Vizier of the territory.

[7] Later, Admiral Sir Harry Holdsworth Rawson, GCB, GCMG (1843 – 1910), Rawson was the commander of British naval forces at the Cape of Good Hope and West Coast of Africa Station at the time of the war, and would later command HM Forces in the Benin Expedition of 1897. He would go on to command the Channel Squadron before retiring from the Royal Navy and being appointed Governor of New South Wales.