Could this be the biggest idiot on Quora?

Quora is a fun site but is, alas, often frequented by idiots with a violently anti-British axe to grind.
A recent exchange with one such buffoon illustrates this perfectly:

The question was flawed before we even began as, of course, the Boers did not ‘rise up against the British in 1900’ at all. They declared war on the British in 1899. But this minor historical inconvenience was not going to stop some ill-informed clown called Daniel Eyre leaping onto his soap box: 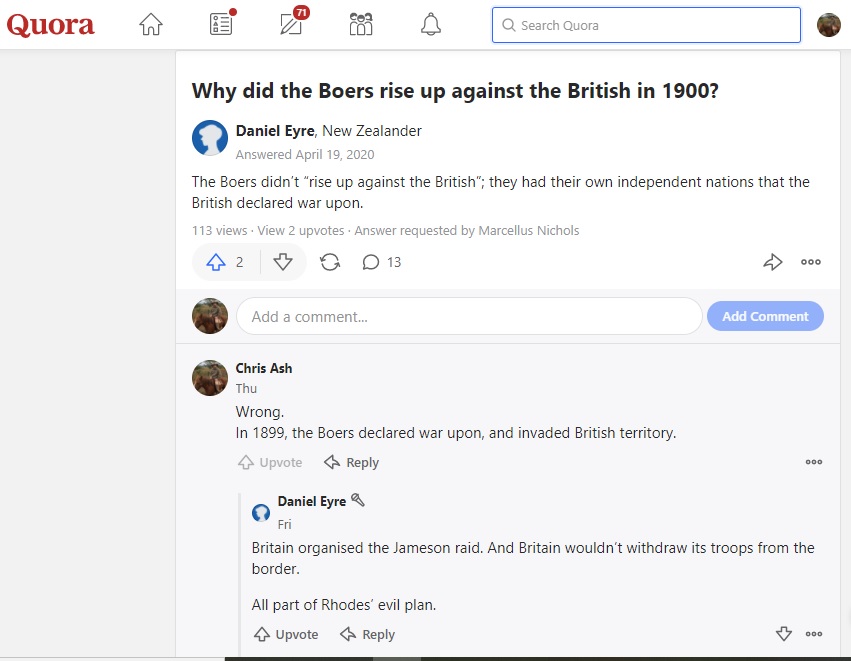 As you can see, he does not even attempt to defend his initial outburst, and instead changes the subject to that of the Jameson Raid (ie. an attempt several years earlier by the Johannesburg Uitlanders to get basic democratic rights – which was unsanctioned by HM Government and which saw the ring leaders imprisoned in London) and then some throwaway remark about ‘troops on the border’. Oh, and just for good measure, apparently it was all Rhodes’ fault. 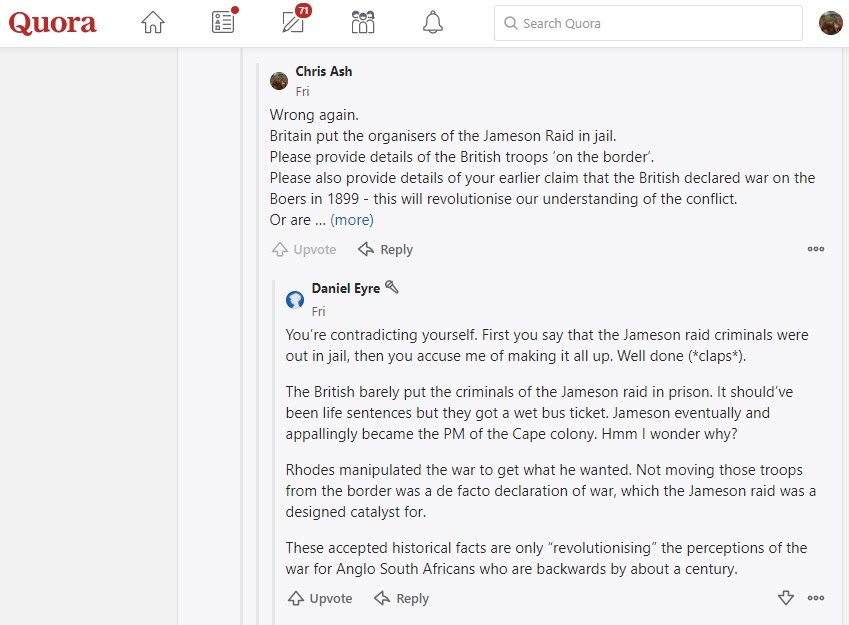 As you can see, the exchange quickly got very surreal. When I pointed out that the wicked British government actually put the organisers of the Jameson Raid in jail, he claimed I was ‘contradicting myself’.
But it soon got even more farcical: 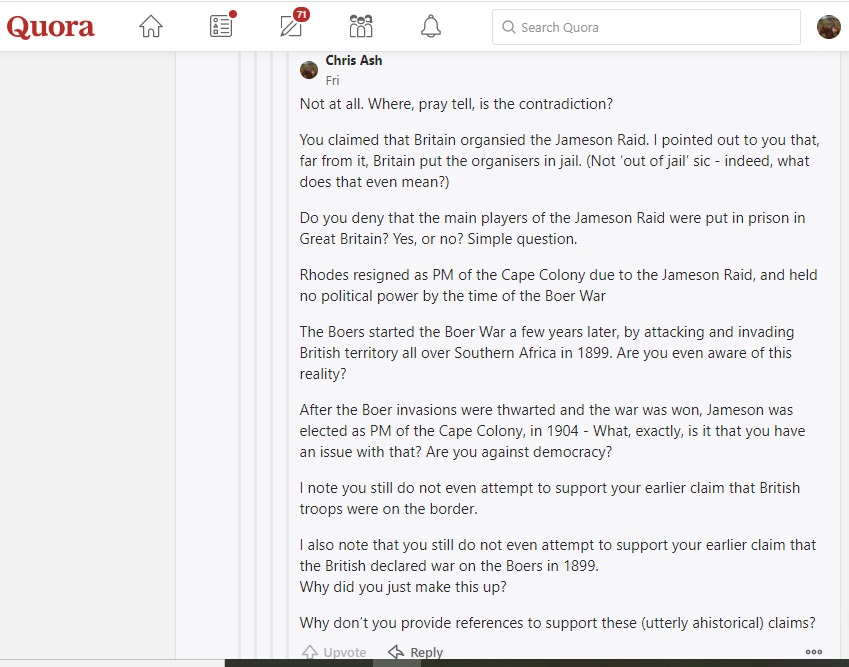 Of course, poor old Danny Boy wasn’t going to provide any references for the nonsense he was spouting – for the simple reason that he was just making it up. Instead, he clearly posted something that was offensive and which was thus deleted by the moderator: 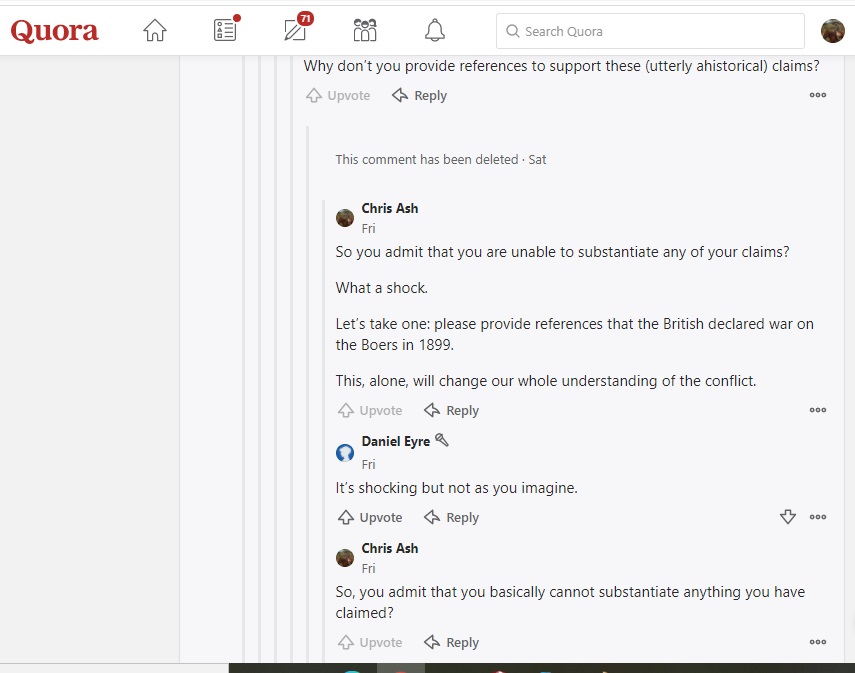 And then, my requests for him to substantiate anything at all that he was claiming prompted one of the most bizarre responses I’ve seen (and that’s saying something by the standards of Quora): 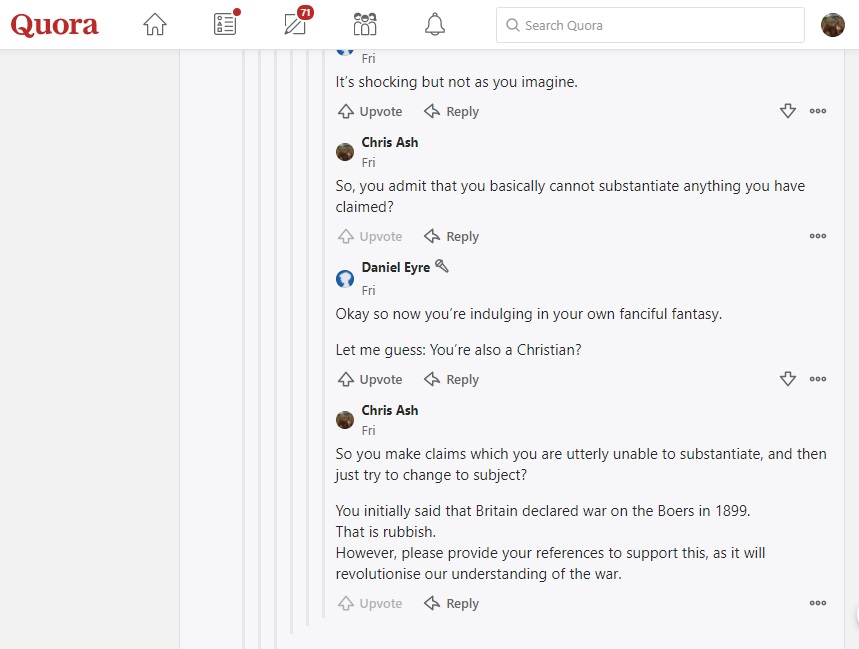 Apparently, my asking him to provide a single scrap of evidence for his nonsense means that I am ‘indulging in my own fanciful fantasy’ and – what is more, and this is the really good bit – enough for him to ‘accuse’ me of being a Christian.

Note to Daniel Eyre: as you know absolutely nothing about the Boer War, don’t feel the need to post on Quora about it and make a complete bloody fool of yourself.