I was recently made aware of this article by a friend:

As well as regurgitating the usual far-fetched Apartheid-regime myths (‘this was an extraordinarily brave rebellion against overwhelming odds’ … errrr – really? So not an invasion of British territory, then?) what this fellow is essentially advocating is that the Boers should be remembered as ‘gallant freedom fighters’, in the same sort of mold, apparently, as members of latter-day terrorist groups such as Umkhonto weSizwe (MK).

The author certainly has a rather bizarre way of looking at the Boer War, and (as is all too common) completely ignores the inconvenient fact that the Boers were the ones who started it by invading and annexing British territory. He also cheerfully overlooks the fact that those ‘Bitter-Einders’ who fought on long after the counter-invasions of the Boer republics were doing so to preserve the Boers’ supposed ‘right’ to Lord it over the millions of other residents of those territories, completely denying them any democratic representation, or basic human rights.
Indeed, the only significant difference between the surrender terms rejected by the Boers at Middelburg[i] in February 1901, and those they accepted at Vereeniging in May 1902, was that the British dropped their insistence that the franchise should be extended to non-whites before self-rule was granted.

So, basically, the Bitter-Einders fought tooth-and-nail to prevent the vast non-white majorities of the former republics from getting the right to vote (unlike in Britain’s Cape Colony, which had a colour-blind franchise system). Christ alone knows what any of that has to do with ‘freedom’.

Also overlooked is that the Bitter-Einders turned to terrorism pure-and-simple, targeting their surrendered kinsmen, civilian trains and black villages, killing and looting as they saw fit. Loyalists and ‘hensoppers’ could expect to be burned out of their property and / or shot, whereas Mission Stations were viewed as a handy source of supply to be raided and pillaged as desired. Afrikaners who had switched sides, and black Imperial scouts and dispatch riders, who were unlucky enough to fall into the hands of the Boers were regularly tortured, castrated and murdered. Even refugee camps established for displaced blacks were targeted by the Bitter-Einders, and sheep and cattle stolen from these poor wretches.
Of course, many other so-called ‘freedom fighters’ have resorted to such despicable acts over the years. What is rather different, however, is that the Bitter-Einders were doing so, not to spread ‘freedom’, but in a desperate attempt to maintain the pre-war position of the white, Afrikaans-speaking, minority as a supreme ruling-caste.

Again, not really much to be admired there.

So rather than some sort of noble and gallant ‘freedom fighters’, in reality the Bitter-Einders more closely resemble the last-ditch ‘Werwolf’ resistance units established in Nazi Germany towards the end of WW2. 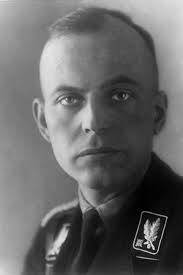 Hans-Adolph Prützmann, SS officer in command of the Werwolf Units


Germany, like the Boer republics in 1899, started the war by invading their neighbours; both regimes were equally convinced – and for equally spurious reasons – that the land they grabbed and annexed was somehow rightfully theirs. When the tide turned against the Germans, and the USSR and the Western Allies started driving into the Fatherland itself, these supposedly die-hard Werwolf units were meant to maintain the fight, operating in captured uniforms or civilian clothes, and making life intolerable for the occupying forces by using hit-and-run tactics, sniping, IEDs and assassinations.

The parallels with the Boer War are obvious: with the Boer invasions of British territory thwarted and the invaders driven out, the republics were, in turn, invaded and occupied by Imperial troops in 1900 – exactly as Germany would later be invaded by Allied troops in 1944/5. Just as the Werwolf units were meant to do (but, in the event, didn’t really manage to), bands of Boer Bitter-Einders dragged the war on long after anyone with half a brain knew it was lost, fighting out of uniform with no respect for the accepted rules of war, hitting at soft targets, massacring black villagers as the fancy took them, and terrorizing those among their own people who wished to move on with their lives.

What should never be forgotten is that the Bitter-Einders, just like the Werwolf, were doing all this on behalf of a deeply racist, expansionist, undemocratic regime. Despite their murderous acts of terrorism, at least the thugs of MK could claim they were seeking to establish democracy in South Africa; the Bitter-Einders, on the other hand, were explicitly fighting against the spread of democracy, and for the supposedly God-given ‘right’ of a tiny ethnic group to maintain complete and utter control over the majority, to deny the franchise to all but the chosen-few, and to practice slavery in all but name.

So, one wonders, does the writer of this article also think the men of the Werwolf units deserve to be remembered as ‘freedom fighters’, and ‘the patriots that they were’? Does he admire them for assassinating Germans who opted to work with the occupying forces, for example? Can we assume he approves of the March 1945 murder of Franz Oppenhoff, the mayor of Aachen, who had recently been appointed by the Allies? And what of the Penzberg massacre of 28 April 1945, when Werwolf ‘freedom fighters’ murdered 15 of their own countrymen for not being fanatical enough in their resistance to the Allied invasion? Is this also something he feels should be celebrated?

How are these atrocities any different from the way, for example, that a gang of Bitter-Einders tortured and murdered Abraham Esau, a Coloured blacksmith who lived in the Karoo town of Calvinia, and who was ‘guilty’ of being Loyal to the Crown? And, to pick another example, what are his views on the massacre of 200 or so non-white civilians at Modderfontein by Smuts’ Boers? Is that something we should admire too?
How about what happened when the ‘noble’ Boers pounced upon the Methodist mission station at Leliefontein in Namaqualand, slaughtering the locals? Any thoughts on how that fits into your theory, Mr Plaut? The indiscriminate violence with which the settlement had been razed and plundered by these ‘freedom fighters’ and ‘patriots’ shocked even the young Deneys Reitz:
‘We found the place sacked and gutted, and, among the rocks beyond the burning houses, lay twenty or thirty dead Hottentots … Maritz had wiped out the settlement, which seemed to many of us a ruthless and unjustifiable act … we lived in an atmosphere of rotting corpses for some days.’
Does Mr Plaut really feel that the Boers who performed this butchery should be put on a pedestal for their actions?

How on Earth can this fellow seek to elevate the Bitter-Einders to the status of ‘patriots’ and ‘freedom fighters’ for conducting a similar campaign to the Werwolf?

[i] The Middelburg talks were also when Lord Kitchener proposed to Louis Botha that all farms should be declared off-limits from attack, as long as the Boers stopped using them as supply bases and, more importantly, themselves stopped targeting the farms of surrendered Boers. Alas, Botha rejected this out of hand, declaring: ‘I am entitled by law to force every man to join, and if they do not do so, to confiscate their property and leave their families on the veldt.’
When Kitchener asked him how best he could thus protect the surrendered burghers and their families, Botha callously declared: ‘The only thing you can do is to send them out of the country, as if I catch them, they must suffer.’
Such a noble ‘freedom fighter’.