On this day in 1806: Battle of Blaauwberg

A victualling station had been established at the Cape by the Dutch United East India Company (VOC) in 1652. When the Dutch republic was invaded by Napoleonic France, Britain moved to occupy the territory at the Cape, defeating a Dutch militia force at the Battle of Muizenberg in 1795. In a lull in the Napoleonic Wars, the British returned the Cape to the Batavian republic (the vassal state which Napoleon had set up in the Netherlands) in 1803, under the terms of the Treaty of Amiens.

The pause in the Napoleonic Wars did not last long, however, and, fighting started again in 1805, with the Dutch Batavian republic one of Napoleon’s allies against Great Britain. With the French (and their Spanish allies) smashed at Trafalgar that year, the Royal Navy was once more able to dominate the oceans. The re-occupation of the Cape was important to maintain this, and thus, in 1806, Britain dispatched an expedition to retake this strategically important enclave from Napoleon’s Dutch vassals. Commanded by Vice-Admiral Sir Home Popham, the force comprised 61 British ships – including 9 warships[i] – transporting 6,654 soldiers and marines under Major-General Sir David Baird. Baird was a good choice, having been stationed in the Cape during the previous occupation.

Popham’s ships arrived in Table Bay on 5 January 1806, but bad weather prevented an immediate landing. Before the weather improved, Brigadier Beresford landed with a battalion (38th Regiment of Foot, known as the South Staffordshire Regiment by the time of the Boer War) and two squadrons of the 20th Light Dragoons (with only few horses available after the voyage), well to the north at Saldanha Bay. This detachment played no role in the action.
With an improvement in the weather, the main British force landed at Melkbosstrand throughout the 6th and 7th. The seas were still very rough, however, and 36 Highlanders drowned when their boat capsized. 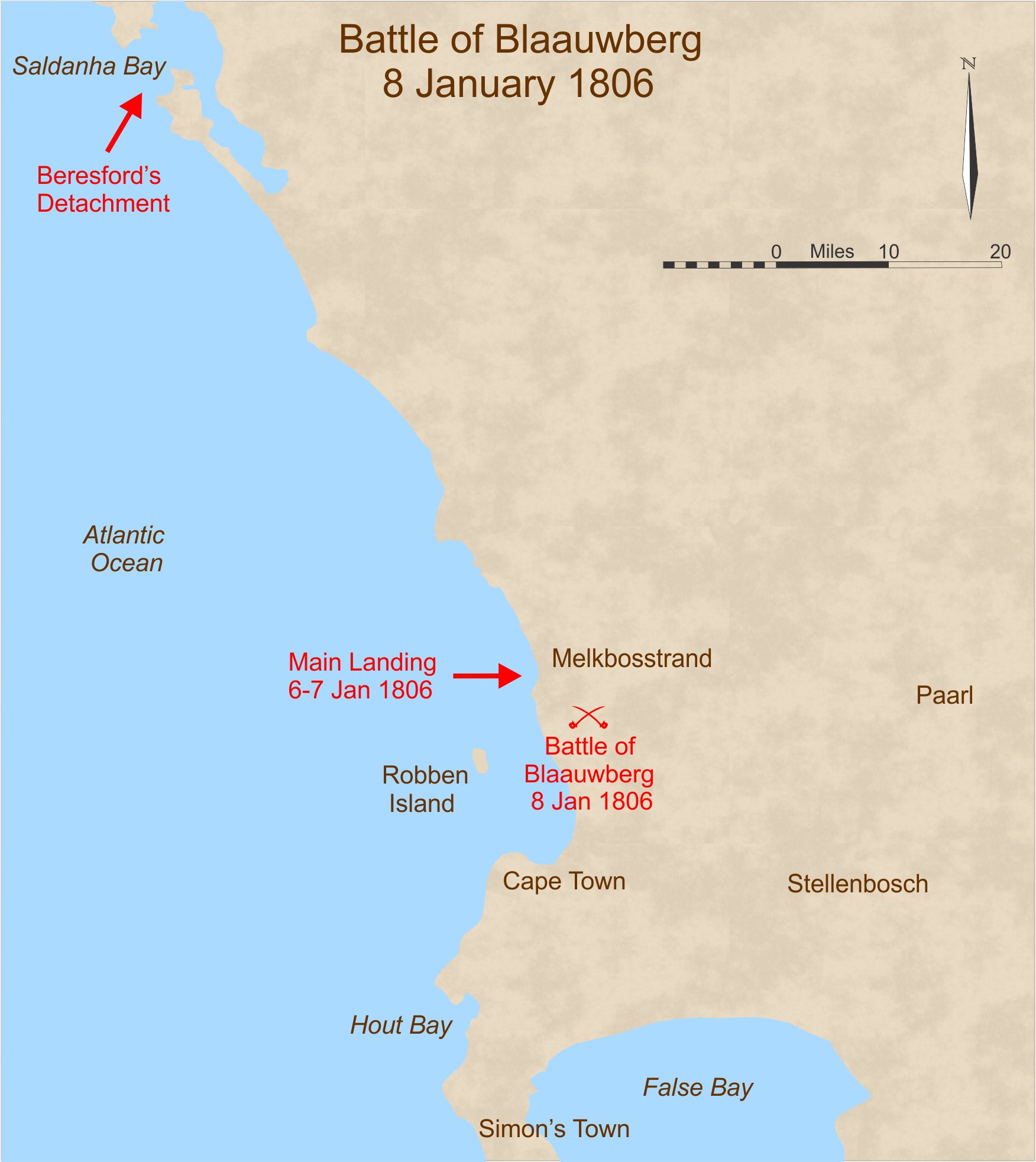 Opposing Baird’s main body, were some 2,000 men under Governor-General, Lt-Gen J W Janssens. His force was built around two regular Batavian infantry battalions, a unit of mercenaries called the Regiment Waldeck, and small contingents of regular light dragoons and horse artillery. The regular units were backed by some 250 French sailors and local raised militia formations (both white and non-white).

Respectful of the firepower of the Royal Navy (and despite what the painting below suggests), Janssens did not make a serious effort to oppose the landings at Melkbosstrand, holding his men well back out of cannon range. Instead, Janssens took up a position below the Blaauwberg Heights, about 12 miles to the north of Cape Town, extending his force out in a line across the plain, with his left flank anchored on a small outcrop of the Blaauwberg hills called Kleinberg. 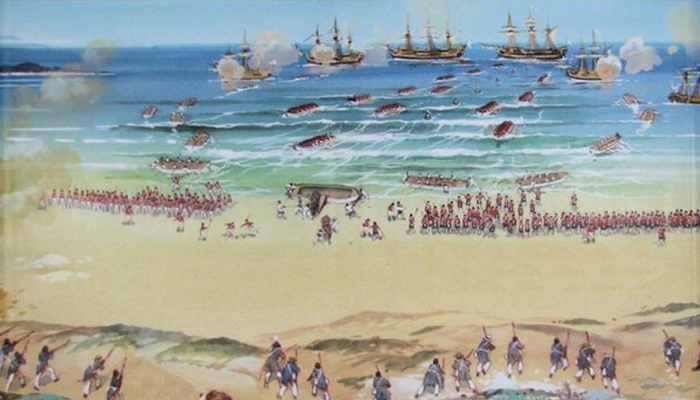 Battle was joined early on 8 January. Despite the detachment of Beresford’s command, Baird still had two infantry brigades available: as shown below, he advanced with the three battalions of Brig-Gen R C Ferguson’s ‘Highland Brigade’[ii] on the left, and those of Lt-Col John Baird’s[iii] ‘English Brigade’ on the right. Around 500 sailors and marines helped the small Royal Artillery contingent man-handle 8 guns[iv] into position. Some sources say a Royal Marine contingent was attached to the Highland Brigade. 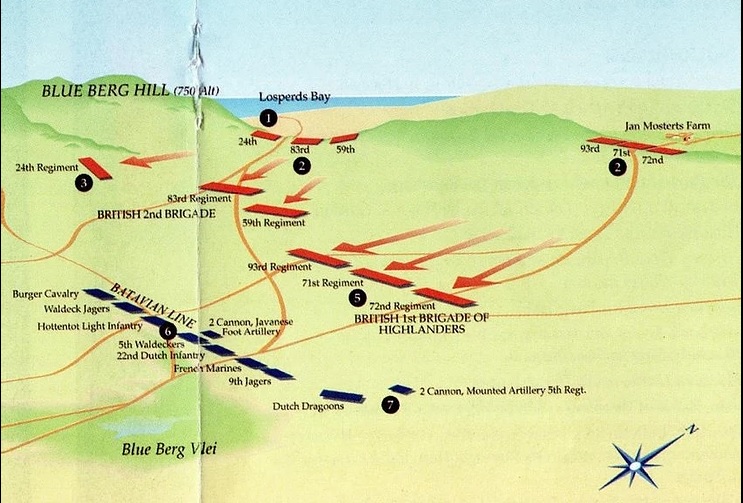 The 24th Regiment (on the right of the English Brigade) stormed and took Kleinberg (marked with a ‘3’ above), clearing the way for the Highland Brigade to assault the main Dutch line. The skirl of the pipes, and the cheers and war cries of the advancing Highlanders, was far too much for the men of the Waldeck Regiment, and they turned and fled before contact was made. This caused confusion along the whole line, and, though some of his units fought bravely, Janssens had no choice but to abandon the position and retreat. 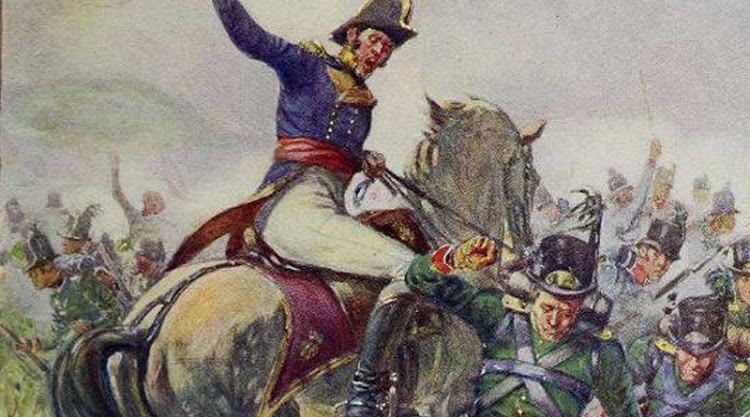 On the British side, casualties were recorded as fifteen killed in the battle with total British casualties (killed, wounded, and those who later died of wounds) of 249. The Dutch casualties are reported to have been between 450 and 650 killed, wounded and missing, but sources vary quite wildly.
Cape Town was occupied by the British on 9 January, as Janssen withdrew the remnants of his defeated army into the mountains. After he surrendered on 18 January, Janssen, and those men of his force who wished, were repatriated to Holland in March 1806 in five British ships. With admirable pragmatism, the Batavian Hottentot Light Infantry (which had fought well in the battle) was brought into British service and renamed ‘The Cape Regiment’. The first CO of the new regiment was Major (later Colonel) John Graham, who had commanded the British light companies at Blaauwberg.

Baird’s victory at the Battle of Blaauwberg ensured that the Cape would remain in British hands throughout the remainder of the Napoleonic Wars, thus protecting Imperial trade routes to the Far East and Australia, and consolidating the Royal Navy’s dominance in the southern oceans. In 1814, as part of the far-reaching Convention of London, the Dutch government formally ceded the Cape to Britain. The agreement also saw various other far-flung territories exchanged, ceded and handed-back between the two powers. Such was the fickle nature of European nations at the time, that by the following year, the Dutch were fighting side-by-side as allies of the British at the final defeat of Napoleon at Waterloo.

[iv] The RA had six small field guns and two howitzers, but no horses to pull them