A deranged and desperate defence of De Wet…

A common, though disappointing, human trait is to decide on one’s opinion, and then try to twist reality to fit it, discarding anything that challenges one’s preferred prejudice. One can see this habit demonstrated by fanatical Defenders of the Myth™ on a regular basis, a good example of which was sent to me recently after a ‘debate’ about my Atlas on Facebook.

One chap asked the assembled horde if there was ‘ANY’ truth behind the statements I made about De Wet fleeing the field at Bothaville[i], leaving his men to their fate during his disastrous invasion of the Cape[ii], and ensuring he was among the first to gap it as soon as the net tightened at the Brandwater Basin[iii]. Of course, De Wet’s not-so-heroic actions in these events (to take just three) are well documented, and his habit of saving his own skin (and to hell with his men) was summed up in this passage, written about De Wet and Steyn abandoning the OFS forces in the Brandwater Basin:

‘The disaster which subsequently befell the army left inside the Basin has been attributed to Prinsloo’s incapacity or even to his treachery, but the chief cause undoubtedly was this sudden evasion by de Wet and Steyn, which cannot be qualified otherwise than as culpable neglect almost amounting to desertion of their post. It is certainly the only occasion on which such a charge could fairly be brought against Steyn, but the whole incident illustrates de Wet’s selfishness as a commander, which militated more than anything against his becoming a really great general’.[iv]

So I think the fair-minded reader would agree that there is plenty of truth behind my statements, and plenty of references to support what I said.

Of course, this unfortunate reality meant nothing to one especially enraged (deranged?) True Believer™, by the name of ‘Christo Geldenhuys’, who jumped in to furiously tap out this badly-written rant: 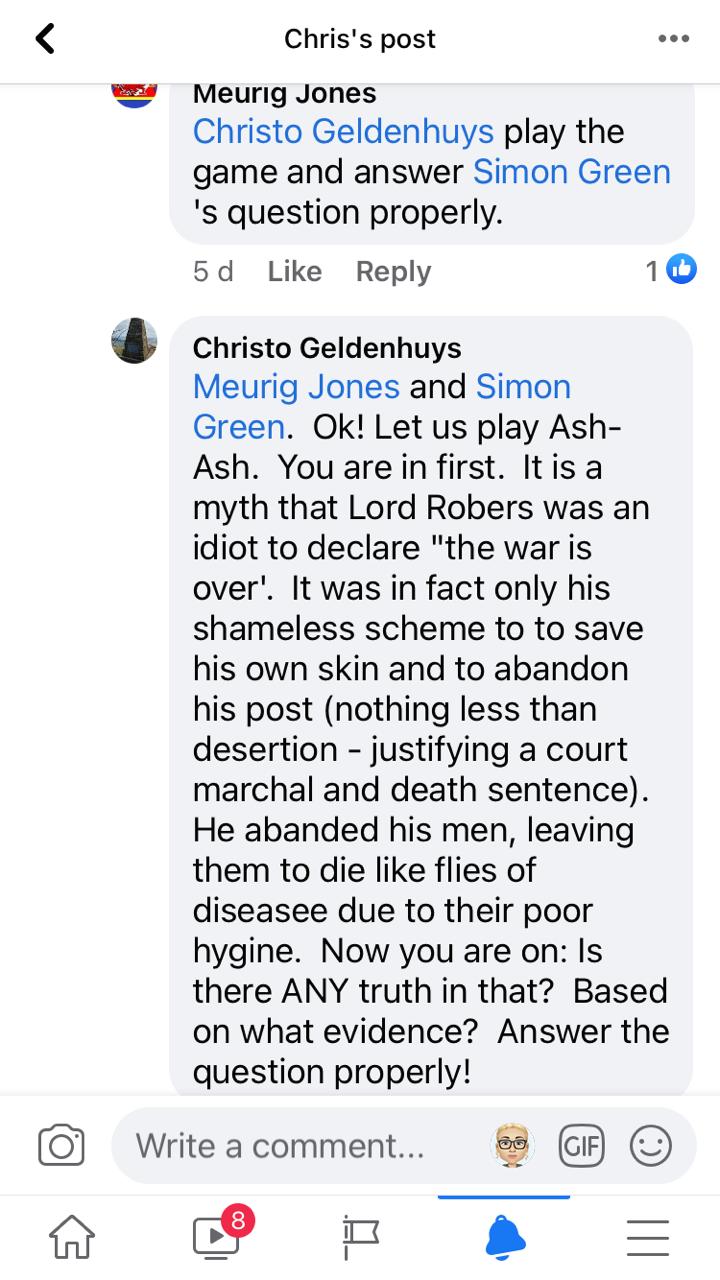 Not only is Geldenhuys unable to spell ‘abandoned’, ‘Court Martial’, ‘disease’ or ‘hygiene’, but what is worse is that he is also clearly unable to refute the inconvenient truths that I dared to raise.
The fact, for example, that De Wet fled from Bothaville as soon as the first shots were fired (de Wet commanded 800 men and six guns, and was initially attacked by just 67 men of the 5th Mounted Infantry and two guns of ‘U’ Battery RHA – but De Wet wasn’t hanging about!).
Or that, a few weeks earlier, De Wet had slipped away in the middle of the night, dodging Imperial forces as he abandoned over 4000 of the men he had foolishly led into the Brandwater Basin.

So, instead, what Geldenhuys tries (desperately, and rather comically) to do is to equate De Wet running away the second bullets started flying / hours before the net closed in on his beleaguered command, to Lord Roberts formally handing over supreme command in the theatre to Lord Kitchener.

This perfectly demonstrates the farcical lengths that True Believers™ need to go to so as to uphold their fantasies. If Lord Roberts had fled the field when his position was attacked, bullets whizzing round his ears, or had ensured he was the first to escape an encirclement (one which he was entirely responsible for leading his men into), I would be the first to point this out. But he didn’t: the enemy capitals taken, and their forces scattered, several months later, Lord Roberts calmly handed over to a replacement and took his leave.
To pretend that this is in any way comparable to a panic-stricken and bewildered De Wet fleeing the laager at Bothaville the moment the shooting started, for example, shows the depths that Defenders of the Myth™ now have to sink to so as to maintain Apartheid-era propaganda.

I’m still not sure if it is pathetic, or amusing: probably a bit of both.