Over the years I have found that the view many South Africans take of the Boer War is driven entirely by a xenophobic hatred of Great Britain, rather than by anything such as historical reality, facts, references or, basically, anything that actually happened in real life.

This was brought home to me recently in a Quora ‘debate’ (I use the term loosely) with a chap who initially tried to dispute my assertion that the war was started by the Boers invading British territory. Clearly realising that he wouldn’t be able to talk himself out of that lie, he then tried to change to subject so as to prattle on about anything and everything else instead, including (would you believe) Brexit and the Weimar Republic. Yes, really.

Anyway, he quickly proved to be very much the sort of fellow who would simply declare that black is white, and to enjoy just making things up as he went along. He refused to accept, for example, that, prior to the Boer War, Kruger’s government had commandeered uitlanders to fight in their endless wars of expansion and subjugation against their neighbours (wars which he, rather ludicrously, said never happened).

It went back and forth for a time, him spewing out Apartheid-regime propaganda, and me replying with historical facts and references for him to look up, if he didn’t believe me. It was all rather like trying to debate with a suicide bomber or a born-again Christian, but he said one thing which amused me:

Despite the quotes and references which prove that he did, Kruger, he claimed, did not commandeer the uitlanders because they “would find it difficult to sit on a horse… never mind shoot a rifle”.

Now this is, of course, pure xenophobia: the notion that people of British stock cannot ride a horse or shoot a rifle is patently ridiculously, but it seems to pass for ‘logic’ among Defenders of the Myth™. I pointed out to him that he might like to do a little research of the famous Imperial Light Horse – a regiment which was formed from the uitlanders he so disparages. 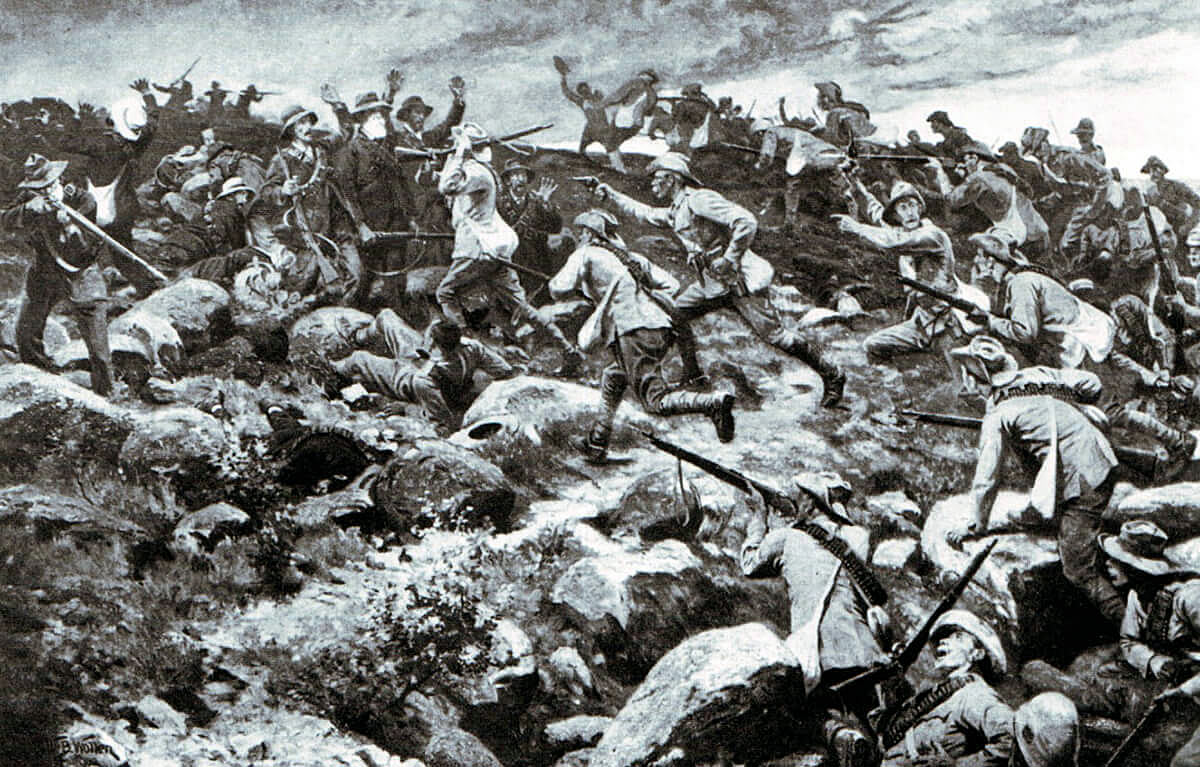 The unit was raised in Pietermaritzburg in the days just prior to Kruger’s invasion of Natal, and when they were first assembled as a complete regiment they were reviewed by General Sir Archibald Hunter who was later moved to remark, ‘I had not long come from a tour abroad where I had seen nothing but the picked guards of Sweden, Denmark, Russia, Prussia, and Saxony, and there was nothing I saw on the Continent then, and nothing I have ever seen here, except the Irish Constabulary, that could put a patch on them. You can tell me when you look at them. Every man was a picture of manhood; he was beaming with intelligence. They were a great success, a most undoubted success. They were the finest corps I have ever seen anywhere in my life’.

Hunter was undoubtably correct, for the Imperial Light Horse played a significant part in the British victory at Elandslaagte – smashing up their hated foe, the Johannesburg Commando, and winning a brace of VCs in the process. Ben Viljoen of the Johannesburg Commando, described the Imperial Light Horse as ‘a corps principally composed of Johannesburgers, who were politically and racially our bitter enemies’. This was no exaggeration: many of the most aggressive and effective Imperial units were raised from South African loyalists to whom it was an intensely personal conflict, a ‘war to the knife’. They had suffered at the hands of Kruger’s regime and been burned out of house and home by the invading republicans; to them the conflict was a fight for their very way of life. 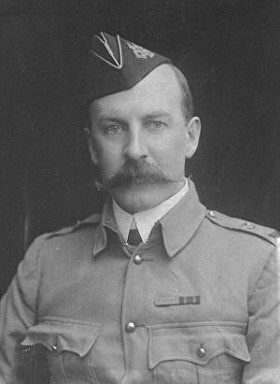 After Elandslaagte, the uitlanders of the ILH continued to play a major role in the Siege of Ladysmith which followed, taking part in the raid on the Boer artillery pieces at Gun Hill, then standing firm at Wagon Hill, defeating the Boer assault on the town, and – incredibly – adding another VC to their tally. As the war rumbled on, the Imperial Light Horse formed part of the column which relieved the Siege of Mafeking. The regiment continued to distinguish themselves throughout the remainder of the conflict, with the Imperial Light Horse helping to defeat, and badly maul, the Boer assault against Frederickstad on 15 November 1900.

On the morning of 24 March 1901, squadrons of the ILH—together with the NSW Imperial Bushmen and the 4th New Zealand Rough Riders—formed the vanguard of Babington’s column which caught de la Rey’s commando strung out on the move and in the open near Wildfontein in the Western Transvaal (the action is also known as Haartebeestefontein, and various other spellings of that name). There was a slight moment of disbelief on both sides, but Lt. Colonel Grey —in command of the vanguard—reacted by far the better and ordered the charge. With a yell, his horsemen dug in their spurs and galloped toward the bewildered bittereinders. The Boers attempted to get one of their guns into action but it was quickly overwhelmed by the charging horsemen. The rest of the commando broke and fled in a panic-stricken rout, their guns and wagons abandoned in their flight:

‘Hardly a shot was fired at the pursuers, and the riflemen seem to have been only too happy to save their own skins. Two field guns, one pom-pom, six Maxims, fifty-six wagons and 140 prisoners were the fruits of that one magnificent charge, while fifty-four stricken Boers were picked up after the action. The pursuit was reluctantly abandoned when the spent horses could go no farther. While the vanguard had thus scattered the main body of the enemy a detachment of riflemen had ridden round to attack the British rear and convoy. A few volleys from the escort drove them off, however, with some loss. Altogether, what with the loss of nine guns and of at least 200 men, the rout of Haartebeestefontein was a severe blow to the Boer cause.’

Babington’s column had smashed up and routed De Le Rey’s commando for the loss of just two men killed and seven wounded.  The pair of 15-pounders captured that day were two of those which had been taken at Colenso, but the action at Wildfontein is not deemed to deserve anything approaching the sort of attention lavished on that battle. 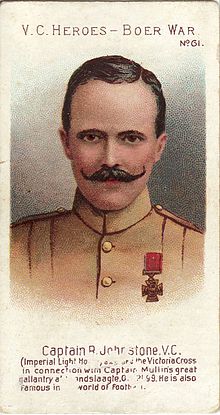 On 18 December 1901, that other ‘invincible’ Boer General, Christiaan de Wet, also came a cropper against the ILH. The action was called Tiger Kloof Spruit and occurred when de Wet endeavoured to ambush a column made up of 1st and 2nd Imperial Light Horse, and about 300 men of the 11th Imperial Yeomanry near Bethlehem. The officer commanding this force was 63-year-old acting Brigadier John Dartnell of the Natal Police—the veteran of the Indian Mutiny who had safely guided Yule’s battered 8th Brigade south from Dundee at the very start of the war—and found himself suddenly set upon by no less than seven commandos. The CO of the 2nd ILH recalled the ambush:

‘He suddenly saw the enemy riding out of the Tiger Kloof Spruit, where they had been concealed [in the long grass]. They formed up in line like a British regiment and charged us over the flat ground. I galloped through a long hollow in front of us, dismounted my men and lined the crest of the ridge, at the same time shouting: ‘Now, 2nd ILH, you have the chance of your lives!’ We opened fire at the approaching enemy and soon checked them. [the closest they got was 150 yards.] A few took refuge in a little stone kraal on our left front, and others swerved to our right and worked round our flank. I noticed a high ridge on my left front which commanded my position and quickly sent Captain Jack Duff with his squadron to occupy it. Only just in time, for he sent a message back that about 500 Boers [an exaggeration] were riding up to occupy the position, but on seeing him and his men and no doubt concluding that the position was strongly held, returned to the valley.’

It is not, perhaps, unreasonable to suggest that a ‘great general’ would have thought to occupy this critical high ground from the start. Nevertheless, de Wet tried to press the attack (mainly against the 1st ILH) for another four hours, but ultimately had no choice but to break off the engagement. He later bemoaned the cowardice displayed by his men, perhaps to deflect the blame for the failure:

‘I saw that only one-third of my burghers were charging. The others were keeping under cover, and do what I could, I could not drive them out… Everything went wrong… when the burghers who were charging the English discovered that the greater part of their comrades had remained, they turned round and retreated… So I thought it best to retreat, swallowing my disappointment as best I could.’

All in all, not a bad effort for men who allegedly ‘couldn’t sit on a horse, or shoot a rifle’.