I was recently invited to this talk: 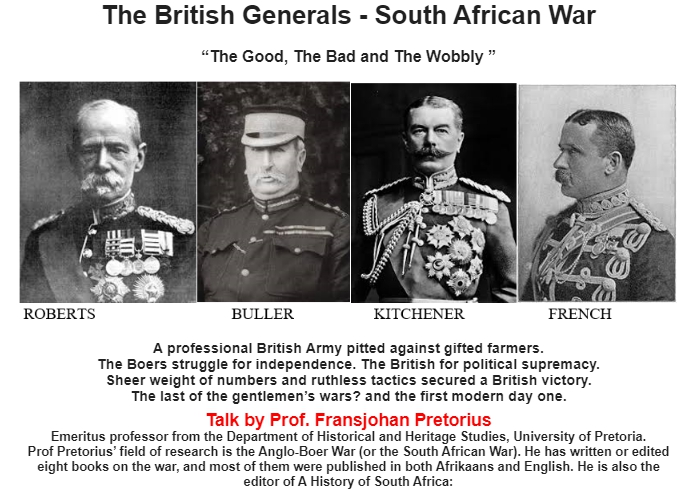 As it was to be presented by one of the leading Defenders of the Myth™, I was far from enthusiastic to begin with, and even less so when I read the little write up above. If nothing else, however, this advert for an afternoon of propaganda and self-pity serves to illustrate the mindset of the True Believers™, so I thought it would be fun to unpack it.

The Boers are, unthinkingly, lauded as ‘gifted’. ‘Gifted’ at what, we are not told – presumably not at capturing towns, as they failed miserably in all their efforts to take any significant ones, and wasted months – and thousands of men – pointlessly, and completely unsuccessfully, besieging Ladysmith, Mafeking and Kimberley. This further suggests they were also not terribly ‘gifted’ at strategy, as frittering away their time in relatively safe and comfortable sieges was not going to win them the war. The republican rank-and-file also proved to be rather less than ‘gifted’ at following orders or taking any personal risks; ambushes were sprung early due to fear of British bayonets, partaking in dangerous missions was distinctly optional, men holding outlying positions would flee as soon as their flanks were threatened, and the mere prospect of British cavalry was enough to send them running time after time.

And as for the Boers ‘struggle for independence’ – it is astounding that an ‘emeritus professor from the department of historical and heritage studies’ seems to be unaware that the Boers were the ones who aggressively started the war, invading and annexing British territory. If they were fighting for ‘independence’, it was in the same way the German army did in two world wars.
The British were certainly fighting to retain control of the region, but after coming under attack what, one wonders, does the professor think they should have done instead? Presumably just surrender to the invading Boers, leaving hundreds of thousands of loyalist settlers, and millions of loyalist blacks, to their fate?

Then we are treated to the normal throwaway rubbish which is mindlessly trotted out to desperately explain away the inconvenient fact that these ‘gifted’ Boers lost: ‘sheer weight of numbers’ and ‘ruthless tactics’, apparently.

In terms of numbers, Defenders of the Myth™ skate over the inconvenient ‘sheer weight of numbers’ enjoyed by the Boers at the start of the war. The invading republicans enjoyed an advantage of around 3:1 over the scattered imperial garrison, and yet – beaten at Talana Hill, Elandslaagte, Belmont, Graspan and Modder River – proved completely unable to take any significant towns, or make any real progress.
Even after the British army sent reinforcements to the region, and just before shattering the republican armies in the period I call ‘Black Month’, it is not as though they enjoyed any enormous numerical advantage:

As late as 4 February, almost four months after the Boer invasions, Imperial strength was only marginally greater than the total Boer forces available: ‘the effective strength of fighting men in Cape Colony, exclusive of the seven militia battalions and the garrisons of Mafeking and Kimberley, was 51,900’. In Natal, it was ‘34,830, of whom 9,780 were in Ladysmith’

This was, it should be remembered, immediately prior to the unbroken string of British victories starting with Tugela Heights and Paardeberg, the mass surrender of Cronjé’s force at the latter, the relief of both Ladysmith and Kimberley, the victory at Driefontein, and the capture of Bloemfontein.
So, no – the Boers were not defeated by ‘sheer weight of numbers’. Claiming this is akin to dismissing the success of the D-Day Landings as being due to ‘sheer weight of numbers’, while ignoring all the planning and training, the logistical obstacles that were over-come, the deception plans, the creation of specialist units, the adoption of ground-breaking tactics, and – most of all – the magnificent bravery of the troops.

Though the British army did (eventually) end up with more men in theatre that the republicans, the reality is that the Boers were out-thought, and out-fought by the Imperial commanders and Imperial troops. Of course, many thousands of burghers, realising this, simply packed up and went home – in a fashion completely unthinkable of British troops.

And this continued after the Conventional Phase of the conflict had been fought and won by the Imperial forces. For the majority of the guerrilla war, Kitchener had about 185,000 and 200,000 men under his command, a figure which included regulars, locally raised militia units, town guards, district mounted troops, mounted police, and the part-timers of the yeomanry regiments. About a tenth of Kitchener’s army—20,000 men—was unavailable at any given time due to sickness or leave.
Worse still, such was the massive commitment to protecting his lines of communications and garrisoning towns for fear of rebellion, that only about 22,000 troops were available for the flying columns and, of these, only 13,000 were in combat units.  Indeed, manpower shortages led to Kitchener having to reduce the garrisons of many blockhouses first from eight to six, and then down to only four men.

By way of comparison, 20,779 bitter-einders turned themselves in at the surrender in May 1902.  As the Imperials accounted for 29,952 Boers (killed, wounded and, overwhelmingly, taken prisoner) between January 1901 and the final surrender, this means there were at least 50,371 Boers still fighting (though certainly not all in the field at the time, obviously) on 1 January 1901. Suddenly the odds no longer look so outrageously overwhelming as is always claimed, and nor are they in any way exceptional for such warfare.

To put these figures into some sort of perspective, in another guerrilla war of the period, American Brigadier-General Nelson Miles was put in charge of hunting down Geronimo and his followers in April 1886. Miles commanded 5,000 soldiers, 500 Apache scouts, 100 Navajo scouts and thousands of civilian militia. This was the force deemed necessary to find and destroy Geronimo and his 24 warriors.
50 years after the Boer War, British and Imperial troops were embroiled in another guerrilla war, this time in Malaya. Despite the advent of air support, helicopters, and armoured vehicles in the intervening years (technological advances which overwhelmingly benefited counter-insurgency forces, rather than terrorists) it still took well over 200,000 troops, police, and home guard volunteers to find, contain, and defeat some 5,000 communist terrorists.
Similarly, over the 30 years of ‘The Troubles’ in Ulster, a total of 300,000 members of security forces served in the province, containing an estimated total of just 10,000 IRA terrorists. Likewise, in the Greek Civil War of 1946-1949, 225,000 government troops—with British and American assistance—were required to defeat around 30,000 communist rebels.

The simple reality of guerrilla warfare/counter-terrorism is that large numbers of conventional troops, police, and paramilitaries are needed, and the Boer War was by no means unique in this regard – however much it upsets True Believers™ to hear it. According to established military doctrine, the theoretical ratio of counter-insurgency forces to guerrillas needed to defeat a terrorist campaign is 10:1.  Indeed, this is the figure still used by military planners today; as recently as 2007, the US Department of Defense produced a document entitled ‘Handbook on Counter Insurgency’ which quotes this as the rule-of-thumb ratio for such operations. So though Kitchener’s initial advantage of about 4:1 sounds a lot to the layman (and also, it would seem, to certain history professors), this is actually nowhere near the ratio which is accepted by military theorists as required for the successful prosecution of a counter-insurgency campaign.

According to accepted military theory, a large percentage of these troops / police / paramilitaries will form garrisons and may never even see a guerrilla during their deployment. Their role is to deny ground to terrorists and reassure the civilian population. Others will pass their deployment escorting supply convoys and the like; in large areas of the theatre, such warfare is rarely intense.

One young infantry officer who served in South Africa for 19 months during the war noted, ‘throughout this long period I saw only one regular soldier killed in a fight’. While based at Heilbron for three months—an experience he described as not war, but rather ‘peace under canvas’—the only noteworthy action he recalled from the period was a patrol from another regiment having killed three Boers for the loss of one of their own.  He went on to note that his battalion had lost 26 officers and men killed in 1900, two in 1901, and just one in 1902.

With so many units required for such essential yet ‘mundane’ duties, military theory states that only between 10 and 20 per cent will be available for offensive operations, spending their tour of duty searching for the proverbial needle in the haystack, actively rooting out an elusive enemy and breaking up his bands.

Of course, it is far easier for True Believers™ to sleep at night if they convince themselves that the poor old, innocent ‘gifted’ Boers only lost because of ‘sheer weight of numbers’; the fact that the Boers were defeated militarily by endless sweeps and in night raids, guided by first class intelligence networks and conducted by hard-riding Imperial columns, is simply far too upsetting for them to admit.

And as for ‘ruthless tactics’, well it would be hard to think of a major war which was won without tactics as allegedly ‘ruthless’ as those the British employed in South Africa. Targeting the supply sources of the enemy is a stratagem as old as warfare itself, and is hardly exceptional in counter-insurgency work. Indeed, one only has to look at the methods employed by the Boers themselves in their endless wars of expansion against their black neighbours to see the sort of ‘ruthless tactics’ they considered necessary. Furthermore, during the Boer War itself, the tactics of the republicans had been pretty ‘ruthless’ from the very start, with repeated flagrant abuses of the white flag, the wide-spread use of khaki uniforms to deceive Imperial troops, and numerous incidents of mass murder, perpetrated against non-whites.

And when faced with the reality of the pointlessly ongoing terrorism of the bitter-einders, what options did Imperial commanders really have? As Professor Walker states:
‘How else could the British cope with burghers who were in the field one day and the next on the stoeps of their homes, each of which was a potential fort and a permanent source of information and supply?’

Captain Slocum, an American observer on the spot, went further:
‘The British have been too merciful, and I believe, had a more rigorous course been adopted when the army first entered this capital and the enemy been thoroughly stampeded, the war would have been materially shortened’

And as Professor Michael Howard observed in 1971, ‘seventy years’ further experience of insurgency and counter-insurgency in warfare may lead us to wonder, not that Lord Kitchener’s pacification campaign took so long and involved some incidental brutalities, but that it did not take still longer and involve yet more’

But of course, Apartheid-era propaganda still holds sway over many, and the victim mentality runs deep. The Defenders of the Myth™ will never admit that Kruger’s cabal were completely insane to pick a fight with the British Empire in the first place, or that his men were outfought and defeated by well-led, well-motived, and courageous Imperial troops.
This undeniable historical reality is far too painful an explanation for them, so instead they come up with all manner of ludicrous excuses and justifications, no matter how divorced from reality these may be.

Needless to say, I’ll be giving this talk a miss.