Humpty Dumpty is alive and well

“When I use a word,” Humpty Dumpty said, in rather a scornful tone, “it means just what I choose it to mean—neither more nor less.” 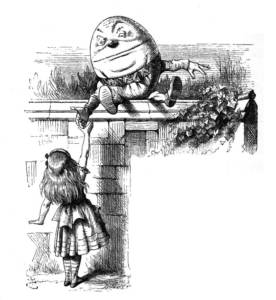 There are some weird and wonderful characters on Quora, but one of the more entertaining is a chap who seems to stalk me there, and whom I consider as the ‘Humpty Dumpty’ of the True Believers. Humpty Dumpty popped up recently to respond to an answer I wrote: 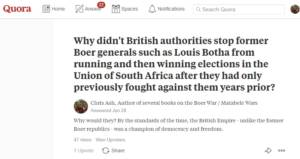 It was a good question – why on earth would any power which, having just been attacked and forced to fight a bitter and costly war, then grant their defeated foe the franchise so readily? Indeed, even those Cape Rebels – men who by any standard of the word were traitors – were only stripped of the vote for five years, a ‘punishment’ which Conan Doyle described as:

‘The loss of five years’ franchise as a penalty for firing upon their own flag is surely the most gentle correction which an Empire ever laid upon a rebellious people.’[i]

When this act of reconciliation is compared to the way the pre-war Boer republics refused to even countenance extending the vote to non-whites (and the way the Transvaal moved heaven and earth to stop even English-speakers getting a fair franchise), it is pretty evident that Britain was indeed the region’s champion of democracy and freedom in the period. Of course, dealing in facts such as these – not to mention the colour-blind Cape Qualified Franchise – cuts little ice with Defenders of the Myth, and a couple were driven to make amusing replies to my post: 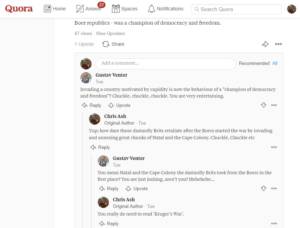 You will notice that, true to form, Humpty Dumpty popped up and spouted a little string of words which simply made no sense. If we are to believe that he means what he wrote, then in his bizarre world view, the Boer republics were ‘invaded’ and the ‘motivation’ was ‘cupidity’. Of course, this is ahistorical and nonsense: the Boers were the ones who started the Boer War by invading British territory – which I pointed out to him.
Indeed, it would be a little like saying that the Soviet Union’s invasion of Germany in 1944 was ‘motivated by cupidity’… rather than admitting that it actually had rather a lot to do with the fact that Germany had started things by invading the USSR.

Troublesome things like ‘facts’ and ‘historical reality’ don’t deter Humpty Dumpty for long, however, and he popped up again to spray a few more random words, the meaning of which seems only known to him. Unable to deny that the British annexed the Boer republics in retaliation for their own territory having been invaded, instead Humpty Dumpty justified this by claiming the Cape Colony and Natal had earlier been taken from the Boers.

No doubt just making things up goes down well at the sort of braais Humpty Dumpty likes to attend, but the notion that that the Cape Colony was ‘taken from the Boers’ is simply hogwash. The Cape had been owned by the Dutch East India Company and, later, after the nationalisation of that company in 1796, was Dutch imperial territory – never a Boer republic. Yes, Britain had occupied the Dutch-owned Cape during the Napoleonic period, but this was done in response to the French overrunning Holland and setting up a puppet government. The Cape was then formally (and peacefully) ceded by Holland to Great Britain in the 1814 Convention of London, a treaty which also saw all manner of other far-flung territories swapped and deals made.

So, no – it was never run by ‘the Boers’ and it was simply exchanged between two Empires.

What is more, the Cape Colony which Britain acquired was nothing akin to the Cape Colony which the Boers invaded (or, in the frazzled mind of Humpty Dumpty, tried to ‘recapture’) in 1899. It was still a fairly small territory around the Cape itself, and the expansion further up the coast – including the (British) 1820 Settlers – and further inland all occurred after it had become a British possession. 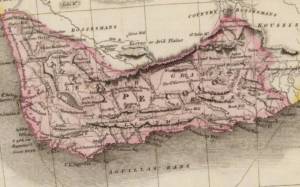 The extent of settlement of the Cape in 1809

The situation of Natal is a little more complex, but basically saw the British, Boers and Zulus all jostling for position at about the same time – indeed, the 1835 British settlement of Port Natal (later renamed D’Urban / Durban) pre-dated the arrival of the Vootrekkers in the region by a couple of years, and there was a short-lived sort of loose alliance between the two groups of settlers. The Zulus granted the Boers a tract of land south of the Tugela[ii] and they set up a chaotically-run republic called ‘Natalia’ centred on Pietermaritzburg, a polity which the historian George McCall Theal described as being “utter anarchy. Decisions of one day were frequently reversed the next, and every one held himself free to disobey any law that he did not approve of. … Public opinion of the hour in each section of the community was the only force in the land.” [iii]
British concerns about the new comers were raised when, true to form, a commando force under Andries Pretorius attacked the Xhosa in December 1840. Things soon got much worse. Encouraged by Dutch trouble-makers, and determined to seize control of it, the Natalia Boers tried (and failed – thanks to the endeavours of Dick King) to capture the British enclave at Port Natal in 1842. One might even say they acted with ‘cupidity’.

The British were thus reluctantly spurred into declaring a colony in the area:

‘Finally, in deference to the strongly urged views of Sir George Napier, Lord Stanley, in a despatch of 13 December, received in Cape Town on 23 April 1843, consented to Natal becoming a British colony. With Natalia rapidly becoming even more chaotic than previously, on 8 August 1843 the Volksraad unanimously agreed to the terms proposed by Lord Stanley, though many Boers trekked away in disgust at the British insistence that the institutions adopted were to be as far as possible in accordance with the wishes of the people, but with one fundamental condition “that there should not be in the eye of the law any distinction or disqualification whatever, founded on mere difference of colour, origin, language or creed.”’

Goodness – those awful, ghastly British with their notions of fairness and freedom and their liberal ways! No wonder that so many Voortrekkers threw temper tantrums, packed up and headed north. And no wonder poor old Humpty Dumpty has to make up his own meaning for words – how else could he possibly convince his mates that the Boers were always the innocent party in absolutely everything?

[ii] ie. nothing close to what the British colony of Natal was in 1899 – the land between the Tugela and the Buffalo – which became known as ‘Klip River County’ was only ceded by the Zulus to Natal after it became a British colony