Frantically trying to defend the myth… 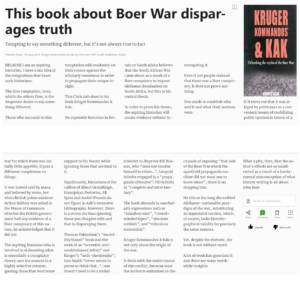 A couple of days ago, I stumbled across a review of KK&K penned by self-declared ‘aspiring historian’ John Boje – not a fellow I have ever heard of, I must confess. Alas, it would seem that Mr Boje either did not fully read the book, or was incapable of understanding it as his ‘review’ (if it really deserves to be termed as such) is littered with mistakes and bizarre claims.

Indulging in a spot of sycophantic hero-worship, Boje squeals with indignation that Fransjohan Pretorius is not included in my bibliography, for example. In fact, two of Pretorius’ books are mentioned in the bibliography of Kruger, Kommandos & Kak… which leaves one wondering why Boje felt the need to tell such a blatant lie to his readers? 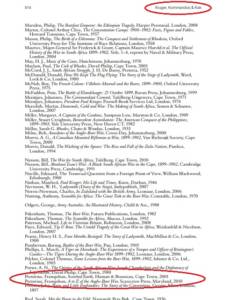 Tut-tut, Mr Boje – you have been caught telling a blatant lie

Was he perhaps aware that the case he was desperately trying to build against KK&K was so weak, that he frantically turned to using untruths to bolster it? It is difficult to think of an alternative explanation.

With admirable (if rather sheep-like) loyalty, Boje also leaps to the defense of Professor Bill Nasson, apparently shocked and offended (horrified even?) that I say ‘one doesn’t need to be a rocket scientist’ to disprove his claims. What I actually stated was:

‘In The War for South Africa, Nasson says that the Salisbury Government figured on 75,000 men being required, the war lasting ‘between three and four months’ and costing ‘perhaps £10m or £11m’. He then asserts that the British assumed ‘victory would be secured for no more than £600,000 a month’.  All very damning at first glance, but his figure of 75,000 men is contradicted by the numbers put forward by military planners; and one doesn’t need to be a rocket scientist to realize that Nasson’s financials don’t quite add up—£600,000 into £11m is 18 months, not ‘between three and four’.’

In case there is any lingering doubt:

Does Boje dispute my maths? Does he really think that a war ‘lasting between three and four months’ and costing ‘perhaps £10m or £11m’ equates to ‘victory being secured for no more than £600,000 a month’… and if so, why? However much Boje might (unthinkingly) admire Nasson as a historian, there can be no doubt that Nasson’s maths ability leaves a lot to be desired.

Though Boje claims to have understood that KK&K was written to challenge all manner of myths that surround the war, he only seemed interested in doing his bit to frantically maintain the Apartheid-era fiction that the Boers were the poor, innocent party of the piece. Perhaps hoping (praying?) that his spell-bound readers would simply take him as his word, this ‘aspiring historian’ grandly declares that ‘no reputable historian in Britain or South Africa believes that the South African War came about as a result of a Boer conspiracy to impose Afrikaner domination on South Africa’.

This seems to be a very convenient way of not actually having to refute any of the thousands of references I supply which prove that a Boer desire to dominate South Africa is indeed exactly what caused the war: to Boje’s mind, these references would seem to be irrelevant. What really matters, apparently, is whether or not other historians agree – something he rather hastily claims none do. I shouldn’t like to think that Boje is lying again, so let’s give him the benefit of the doubt and say that in this statement too, he is simply hopelessly mistaken. Andrew Roberts, a historian who has sold more books than Boje’s preferred rogue’s gallery of heroes could ever dream of, for example, reviewed KK&K thus:

‘This is revisionist history at its absolute best. With meticulous scholarship but also an attractively waspish turn of phrase, Chris Ash turns everything we thought we knew about the Boer War on its head. After reading this, you won’t think of that conflict in the same way again.’

In his book, ‘Salisbury, Imperial Titan’ (which I quote in KK&K, so Boje, assuming he did actually read my book, can have no excuse for not having heard of it) Roberts agrees that the Boers craved domination of Southern Africa:

‘British policy-makers became convinced that British paramountcy in southern Africa, so crucial for the future development and protection of the Empire, was under growing threat [err – a plan for Afrikaner domination of South Africa, perhaps Mr Boje?]… This racial antagonism between Boer and Briton was, it was felt in Cape Town, Pretoria and London, leading inexorably towards a clash.’

and, also quoted in KK&K by Roberts:

‘the two obstinate bearded old patriarchs, Salisbury and Kruger, both knew that this struggle was actually about ultimate regional paramountcy, about showing who was ‘Boss’ in South Africa’. [not sure how Mr Boje missed this one too]

Official Historian of the Royal United Services Institute, Dr Damian O’Connor also approved of KK&K, describing it as ‘a highly polemic and exceedingly witty debunking of the many myths he had come across in his twenty years in South Africa. It was a very good book, well researched, thoughtful and all the better for standing well outside the rather sterile academic consensus; it sparked death threats, a Facebook pillorying and a one-star review of his work on Amazon by none other than Fransjohan Pretorius, Professor of History at (where else) the University of Pretoria… In my humble opinion, Ash’s judgment is more reliable than the good professor’s, and despite all the huffing and puffing and [Pretorius’] bizarre speculations about what lies beneath a Scotsman’s kilt, what really struck me about Ash’s work is just how much his experience of researching South African history chimed with my own.’

South African historian Hugh Rethman’s ‘Sacrifice Betrayed’ also confirms that the aim of the Boers was much more ambitious than the likes of Nasson and Pretorius like to admit. Quoting SJ de Toit who, as early as 1883, claimed: ‘The South African flag shall yet wave from Table Bay to the Zambesi, be that end accomplished by blood or by ink’, Rethman declared that this was a pretty good summation of how the Transvaal would conduct itself over the next twenty odd years.

Eminent American Historian, the late Byron Farwell took a similar line (also quoted in KK&K, and thus clearly something else Boje missed as he flicked through it, his mind seemingly only focused on how to claim it was all lies):

‘Both sides wanted a united South Africa, though, of course differed in their ideas of who should dominate it.’

So perhaps what Boje meant by ‘reputable’ was ‘historians who say things he likes’? Either way, I think Boje is less an ‘aspiring’ historian and more a ‘conspiring’ one: ‘the myth must be defended at all costs!’.