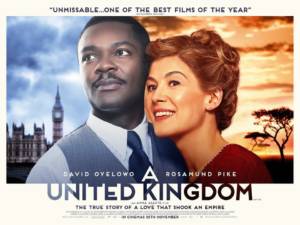 The propaganda offensive against the record of the British Empire in Southern Africa makes strange bed fellows of the extreme Right of Afrikanerdom and the extreme Left in Britain; two groups of highly deluded people who have nothing in common, except a determination to pretend that Great Britain is responsible for every ill imaginable.

I had been rather looking forward to watching the recently released ‘A United Kingdom’, a film which starts in 1947 and is based on the story of Seretse Khama, King of the Bamangwato People[i] and future President of Botswana, and the furor surrounding his marriage to a (white) English girl. I must confess to fearing the worst as soon as I saw it was made by BBC Films, and sure enough, the self-loathing luvvies of the BBC quickly established that the average Post-War Briton was a wicked racist.

The departure from historical reality kicked into gear when Seretse Khama announced that Queen Victoria had declared a Protectorate over Bechuanaland (as Botswana was called at the time) to prevent it being grabbed by ‘racist South Africa’. This struck me as rather strange, given that the Protectorate was declared in 1885, and South Africa did not exist as a nation until 1910. In reality, of course, the Protectorate was actually declared (at the insistence of various Bechuana Kings and Chiefs) to prevent further incursions from the Transvaal Boers. Indeed, as early as 1876, King Khama the Good (the grandfather of Seretse) joined the appeal for Imperial protection from the Boers:

‘I write to you, Sir Henry, in order that your queen may preserve for me my country, it being in her hands. The Boers are coming into it, and I do not like them. Their actions are cruel among us black people. We are like money, they sell us and our children. I ask Her Majesty to defend me, as she defends all her people. There are three things which distress me very much: war, selling people, and drink. All these things I shall find in the Boers, and it is these things which destroy people to make an end of them in the country. The custom of the Boers has always been to cause people to be sold, and to-day they are still selling people.’

Earlier still, Montsioa Toane, Chief of the Barolong people of Bechuanaland, had written to ‘His Excellency Her Britannic Majesty’s High Commissioner, Sir P. Wodehouse, KCB’. The chief requested ‘refuge under your protecting wings from the injustice of the Transvaal Republic, whose government have lately, by proclamation, included our country within the possessions of the said Republic’ and went on to explain:

‘…without the least provocation on our side, though the Boers have from time to time murdered some of my people and enslaved several Balala villages, the Transvaal Republic deprives us, by said proclamation, of our land and our liberty, against which we would protest in the strongest terms, and entreat your Excellency, as Her Britannic Majesty’s High Commissioner, to protect us.’

So why, one wonders, did the ghastly bloody luvvies behind the film pretend that ‘racist South Africa’ (a nation which did not actually exist at the time) was the reason for the Protectorate? Given that the standard line of BBC types is that the British Empire is to blame for everything, perhaps it was all a little awkward for them to have to admit that the aggressive expansionism of the Boers were actually the problem? Of course, in the bizarre world view of the British Left, ‘the Boers’ are ‘good’, having been re-invented as poor, innocent victims of British Imperial ‘aggression’, concentration camps and, ‘like, you know: genocide, man’… whereas ‘South Africa’ was probably seen as a much safer choice given that, until 1994 it is considered irredeemably ‘bad’, and equates to Apartheid (even though Apartheid had not yet been implemented by 1947, let alone 1885).

Though tempted to switch off at that point, I decided to give it a few more minutes. Things did not get any better, however, as shortly thereafter the wicked (very British) villain of the piece announced that the prospect of the mixed marriage between young Seretse Khama and his white Bride-to-Be was opposed by ‘the President of South Africa, the President of South West Africa and the Rhodesians…’
As much as everyone knows historical reality matters little to the BBC, this was pathetic even by their shocking standards. In 1947, South Africa did not have a president: Jan Smuts was the Prime Minister and King George VI was the (ceremonial) Head of State[ii]. Furthermore, South West Africa was being (controversially) administered as the 5th Province of South Africa – so Christ alone knows why the hand-wringers of the BBC would think it had a President.

At this point, I decided to switch off before the BBC Thought Police somehow managed to blame Brexit for everything. Unfortunately in these enlightened times, it seems to be simply impossible to make a film about any aspect of Colonialism without the Left pushing their pathetic propaganda and displaying their utter ignorance of, and contempt for, historical reality.

[i] Though Seretse had become King at age 4, his Uncle Tshekedi Khama acted as Regent at the time

[ii] South Africa elected its first State President in 1961 after they narrowly (and foolishly) voted to become a republic.