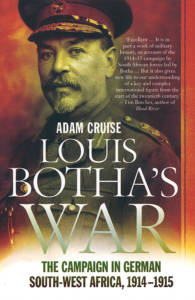 With most attention focused on the Western Front, the ‘other’ theatres of the Great War rarely get much attention. Even in comparison to the Italian Front, or the action in East Africa, however, the campaign to capture SW Africa (modern-day Namibia) really is treated like a ginger-headed step-child. ‘Louis Botha’s War’ goes a long way to rectify this, and is well worth a read.

By the time of the Great War, former-Boer General Louis Botha was the Prime Minister of the recently-unified South Africa and a born-again Anglophile. Before he could even start his campaign against the Germans, however, Botha had to put down a rebellion by Christiaan de Wet and various other unreconstructed bitter-einders at home, and Adam Cruise does a good job of linking the reaction to the campaign at home to the steady rise in Afrikaner extremism – a rise which ultimately led to the Apartheid regime. There are interesting anecdotes and vignettes throughout the book, and the tale is well told and illustrated by good quality maps and photographs.

As many of the leading players fought in both the Boer War and the SW Africa Campaign, there are, alas, there are some statements which will keep various Boer War myths alive. Mr Cruise claims, for example, that Botha’s defeat of the attempted Boer rebellion in 1914 ended ‘the glittering career of the shrewd general [de Wet] who had never been defeated by the British’.
As I have covered in previous blog entries, this was certainly not the case as de Wet was defeated by Imperial troops on numerous occasions; despite heavily outnumbering the garrison, he failed utterly in his attempts to take the town of Wepener, for example, then was defeated at Poplar Grove, again at Driefontein and then yet again at Frederikstad. His force was also surprised and defeated at Bothaville – though de Wet perhaps did not know much about this, as he shamelessly ran away the instant the action started.
In June 1901, near the farm of Graspan, he was defeated and driven off by Major Sladen’s men, despite outnumbering them five-to-one. In December of that year, he was defeated yet again, this time at Tiger Kloof Spruit by the Imperial Light Horse. However, all these defeats pale into insignificance when compared to his greatest hammering – that taken when he led a crackpot invasion of the Cape Colony in February 1901, an enterprise which was a farcically unmitigated disaster from start to finish.
De Wet certainly was never captured by the British – but he was by no means undefeated. If, for some reason a General needs to be actually captured to be considered defeated, or that attacks which are driven off don’t count as defeats, then one could equally claim that Buller was never defeated by the Boers.

Another interesting assertion made in the book was that the Natal Carbineers was the only ‘the only mounted British unit in the field not besieged at Ladysmith’. While it would perhaps be a mite pedantic to point out that the Natal Carbineers were not actually a British unit, even the general claim is more than a little suspect.
Firstly, most of the Natal Carbineers (about 400 men) were besieged at Ladysmith – the siege of which commenced on the 2nd of November 1899 – with only one Squadron of the Regiment (the 5th or ‘Estcourt-Weenan’ Squadron) not being trapped there throughout as it had been ordered to Colenso upon mustering. It is certainly true that, other than the 2400 or so which were bottled up in Ladysmith, there was an extreme paucity of mounted troops in Natal. However, ‘A’ Squadron of the Imperial Light Horse had also been detached from their Regiment and, unlike the rest of the ILH, was thus not besieged in Ladysmith either.
‘A’ Squadron of the ILH, plus the Estcourt-Weenan Squadron of the Natal Carbineers, together with the Dublin Fusiliers MI Company and the 60th MI Company, were formed into the ad-hoc ‘Composite Regiment’ under Major Hubert Gough[i], and later shepherded the Boers north again after the Battle of Willow Grange on the 23rd of November.

Over on the Western Front, at the time that Ladysmith was placed under siege, Lord Methuen’s division also fielded horsemen – around 900 of them, including the 9th Lancers. Also not considered in the claim are the MI companies of the regular infantry battalions (since 1888, one company of the eight of each battalion was theoretically tasked as mounted infantry), plus the local mounted units like the Cape Mounted Riflemen, which was operating near Barkly East at the time, and the Umvoti Mounted Rifles which was operating near Helpmakaar. Additionally, units such as Thorneycroft’s Mounted Infantry, Bethune’s Mounted Infantry and the South African Light Horse were all being raised around the time Ladysmith’s Siege began. Of course, when the Army Corps arrived in South Africa at the end of 1899, the situation improved dramatically as it included eight regiments of cavalry, plus eight companies of MI.
It is likely that the original claim referred to the Estcourt-Weenan Squadron of the Natal Carbineers, and was intended to state that this was the only squadron of the Carbineers which was not bottled up in Ladysmith. Through the normal process of Chinese Whispers which surrounds the Boer War, however, this seems to have grown the usual arms and legs, and eventually the claim became that this was the only ‘British’ mounted unit in the whole theatre which was not stuck in Ladysmith – something which is demonstrably completely untrue.

Unfortunately, Cruise’s attempt at explaining the make-up of the South African army immediately prior to the First World War is also not the best. He instead relies on hoary stereotypes, suggesting the part-timers of the ‘Active Citizen Force’ were led by ‘English officers [with a] penchant for khaki uniforms and clean-shaven faces’, while the ranks were filled out with Boers who were ‘consummate horsemen and sharpshooters, and brilliant guerilla fighters’ who ‘tended to eschew authority and baulked at pushing home an attack’.

To be fair, it is all a little confusing, but after the Union of South Africa in 1910, it was obviously necessary to amalgamate the armed forces from the various Colonies (including the erstwhile Boer republics) which unified to create South Africa. This led to the establishment of a small Permanent Force of regular / full-time paramilitary units, backed by the aforementioned Citizen’s Force comprising the existing part-time Colonial auxiliary units and the rather chaotic Boer Commando system.

The Permanent Force was made up of five mounted regiments which were formed from the existing full-time Cape Mounted Riflemen and the mounted police units such as the Natal Police and Cape Mounted Police. The Cape Mounted Riflemen was re-named the ‘1st South African Mounted Rifles’, and was based at King William’s Town with responsibility for the Eastern Cape and Transkei. The 2nd and 3rd SAMR were formed from the old Natal Police and were based at Pietermaritzburg and Durban. The 4th SAMR was the old Transvaal Police (based out of Pretoria), while the Cape Mounted Police formed the 5th SAMR, based at Kimberley. Permanent Force also included five batteries of artillery.

At the same time, and just to add to the confusion, many of the existing part-time Colonial units which were to form part of the Citizen’s Force also underwent re-organisations, amalgamations and re-branding to very similar names given to the regiments of the new Permanent Force. The two ‘wings’ of the Natal Carbineers were re-named as the ‘1st and 2nd Mounted Rifles (Natal Carbineers)’, for example, while the Border Mounted Rifles and Natal Mounted Rifles were amalgamated to become the ‘3rd Mounted Rifles (N.M.R)’. The Umvoti Mounted Rifles amalgamated with the Zululand Mounted Rifles and the Northern District Mounted Rifles to become the ‘4th Mounted Rifles (Umvoti Mounted Rifles)’, while the famous ‘Uitlander regiment’ –  the hard-riding Imperial Light Horse – was re-named the ‘5th Mounted Rifles (Imperial Light Horse)’. Unfortunately, Cruise does not use these full titles throughout the book, meaning the exploits of these fine regiments get a little lost in the tale.
Though his comments are germane in terms of the Boer Commandos which also formed part of the new Citizen Force, none of these illustrious former Colonial units – which fought with great distinction against Kruger’s invading Boers and throughout the subsequent guerrilla war – would have been happy by Cruise’s suggestion that they ‘tended to eschew authority’ or that they were anything other than well trained and highly professional. This is not to say that these regiments did not include Afrikaners – of course they did and they always had – but they were (and always had been) uniformed, well disciplined regiments, drilled, trained and organised on British army lines – not on those of their former enemies.

The confusion which Cruise creates over this, together with the lack of details of these units – including their histories, old / new names and organisation – was the thing I found most disappointing about the book. It was obviously a time of great flux for many of the units which were brought together to form the unified South African army, and I think Cruise should have included much more detailed ORBATs / equipment / unit strengths and organisations to make this all a little clearer. Suggesting that the Citizen Force units were analogous with the old ‘Boer Commandos’ leaves one wondering just how well he had researched this aspect of the conflict.

The only other thing that grated a little was his continual use of the phrase ‘artillery guns’ – a decidedly un-military terminology: surely ‘artillery pieces’ or just ‘guns’, would have been better.

These are fairly minor quibbles, however, and overall I enjoyed the book: it is well written and feel it is a valuable contribution to the field. Botha is certainly a very interesting character, and as the first Prime Minister of South Africa and the very embodiment of reconciliation, he is not a man who deserves to be air-brushed out of history; first by the Apartheid regime for being too pro-British, and then by the ANC government for being too white.