The Defenders of the Myth are back!

My newly released Boer War Atlas has been very well-received so far, but I knew it wouldn’t be long before a few Defenders of the Myth crawled out of the woodwork to fight the good fight, frantically trying to maintain their cosy comfort blanket of fiction.

Apparently a ‘review’ (ahem) of the book popped up on Facebook, which essentially sought to rubbish it: 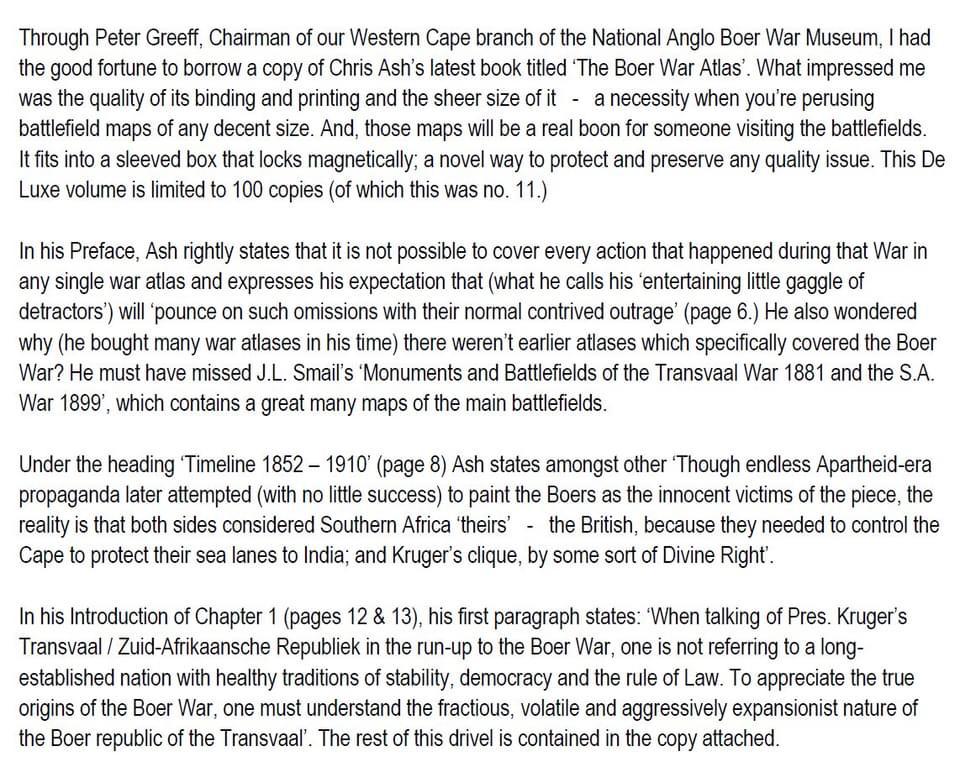 Hard to understand what this fellow is taking exception to… is he really trying to pretend that the Transvaal was a long-established nation, with healthy traditions of stability, democracy and the rule of Law? If so, he is sorely mistaken. And if he is trying to pretend that the Transvaal did not have a penchant for violent expansion, he clearly knows nothing whatsoever about South African history.

Next, he attempts to support the tired, old ‘defensive invasion’ rubbish… simply by saying it must be true because I am ‘non-historian’, apparently. Perhaps he – or one of the professors he so admires – can point out where these mythical defensive positions were? Or why they all, apparently, just happened to be (deep) in British territory? And, while he’s at it, he can perhaps explain why the invading Boers felt the need to annex the land, and loot / rename the towns they took on their way to these undefined / made-up defensive positions? Answers on a postcard… 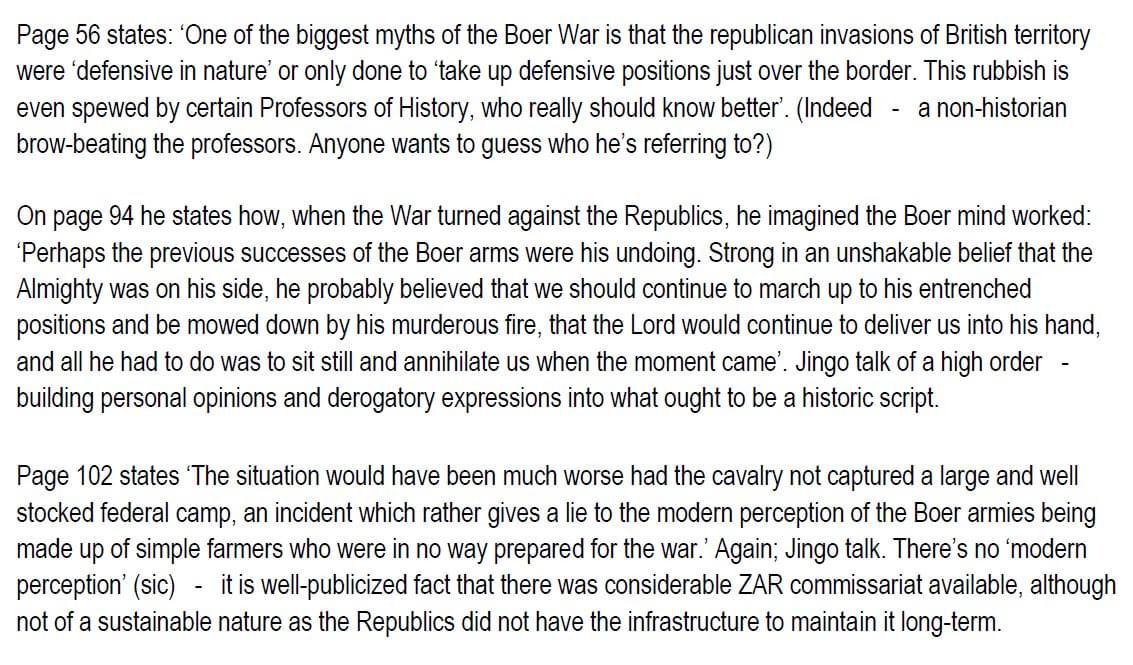 Such is his outrage at someone daring to challenge the Apartheid-era myths, that he fails to grasp that the quote used on p.94 is exactly that: a quote. ie. not something I wrote.
And as for his claim that the modern perception is that ‘there was considerable commissariat available, but not of a sustainable nature etc’, well that is the definition of dancing on the head of the pin.
But hey – what ever helps him sleep at night, I guess. 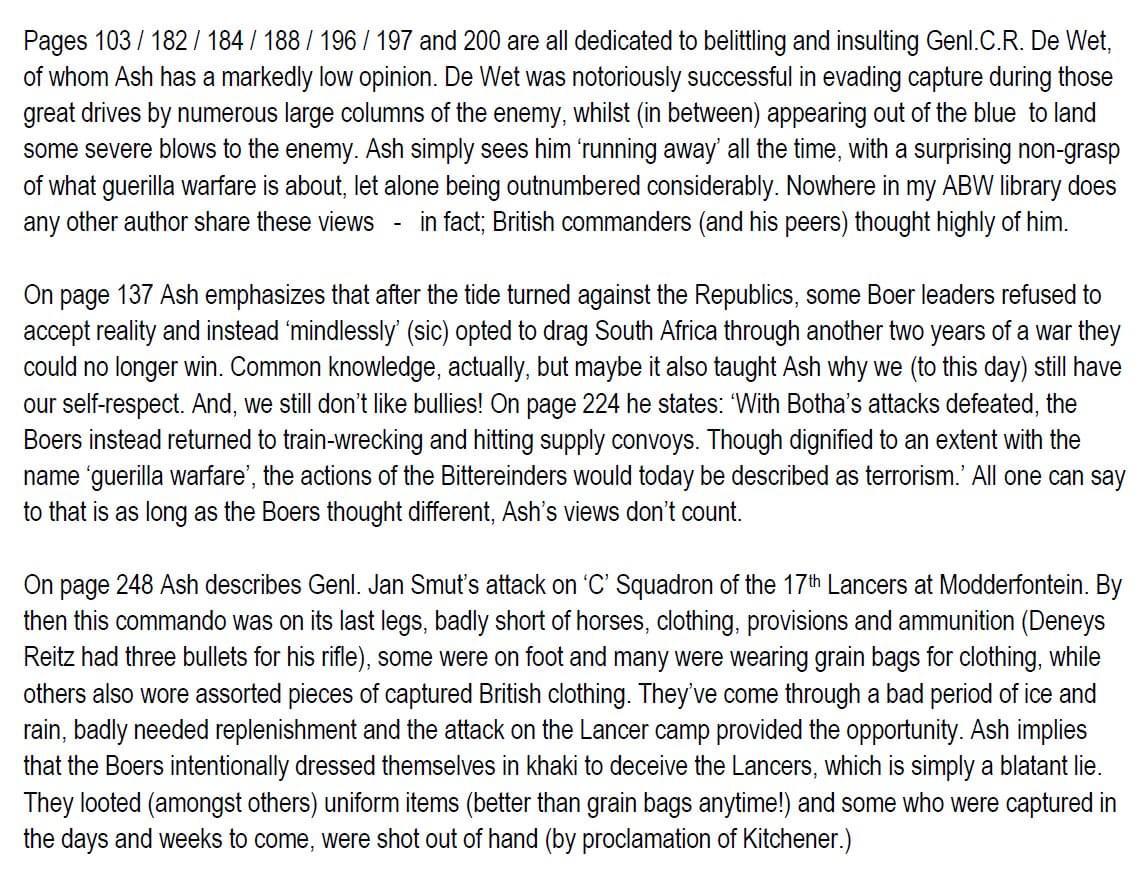 Now we are treated to a bit of sycophantic hero-worship of De Wet. Apparently when De Wet runs away, abandoning his men to their fate (see Brandwater Basin, Bothaville and his crackpot invasion of Cape, for examples), that is actually him being an amazing guerrilla fighter.

Reminding me rather of a toddler sticking his fingers in his ears, and screaming “I can’t hear you!”, my favourite of the lot is his claim that ‘All one can say to that is as long as the Boers thought different, Ash’s view don’t count’. What a brilliantly argued point! Hilarious. So as long as members of Al-Qaeda or the IRA don’t consider themselves terrorists, then no one else’s view matters?

Another classic is that (and even by his own admission), though many of the Boers who attacked the 17th Lancers’ camp at Modderfontein were wearing British khaki, this is all perfectly fine in his eyes, as apparently they weren’t doing it to deceive that Lancers… that that’s exactly what happened is presumably just a happy coincidence, so all is OK. Maybe they just thought it looked good and, well – who cares about the rules of war anyway? 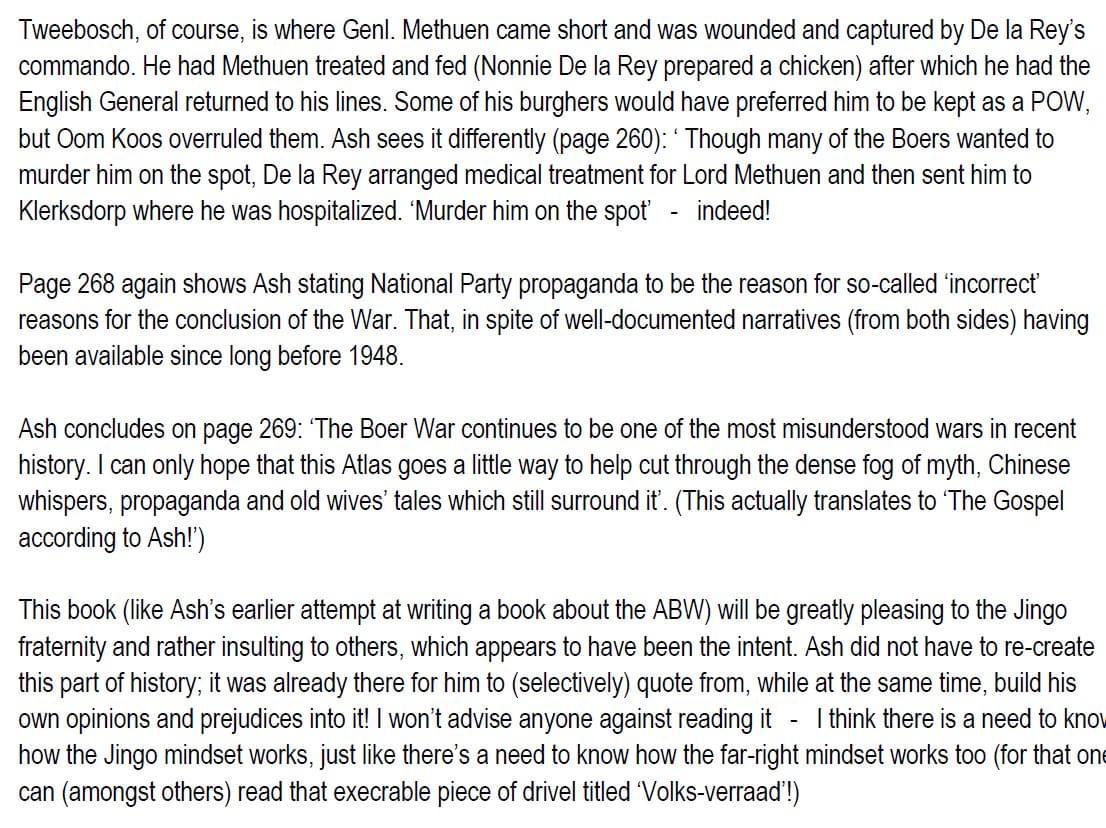 And in a final flourish of nonsense, and without actually giving any evidence, he tries to deny that the more hot-headed of De la Rey’s men did indeed want to murder Lord Methuen. As I mention in the book, De la Rey prevented them doing this (but didn’t bother prevent his men murdering the couple of dozen non-white prisoners they took that day).

To be honest, I am delighted to get this sort of ‘review’: if ever I release a book of which the Defenders of the Myth do indeed approve, then I know I’ve gone wrong somewhere.