On this day in 1900, forces under De la Rey attempted to take a small Imperial outpost at Elands River, in the Magaliesberg area to the west of Johannesburg. This was the opening move in a siege which lasted 12 days, and which saw the Imperial troopers holding off a force of Boers which outnumbered them, and which were led by one of the allegedly ‘great’ commanders of the war (or so we are always told).

There had been a resurgence in attacks by the Boers in the area during July 1900: the battle of Kalkheuwel had been fought on the 3rd, Dwarsvlei and Zilikat’s Nek were both fought on the 11th, followed by Olifant’s Nek on the 21st, and Koster River on the 22nd.

The small post at Elands River had been established on the line of communications between Rustenburg and Mafeking, but with the upsurge in Boer attacks, the commander – Lt. Colonel Hore – was told to prepare the position for a siege.

Held by just 300 Australians and Rhodesians, with two Maxims and a 7-pounder, the camp at Elands River was on a slight rise which dominated the nearby water source, but was overlooked by hills on three sides. On 4 August 1900, a 500-strong commando with four guns, three pom-poms, and a machine gun began bombarding the garrison. When De la Rey arrived with his men, and took command, this brought the besieging force to 2,000, with seven guns.[i] 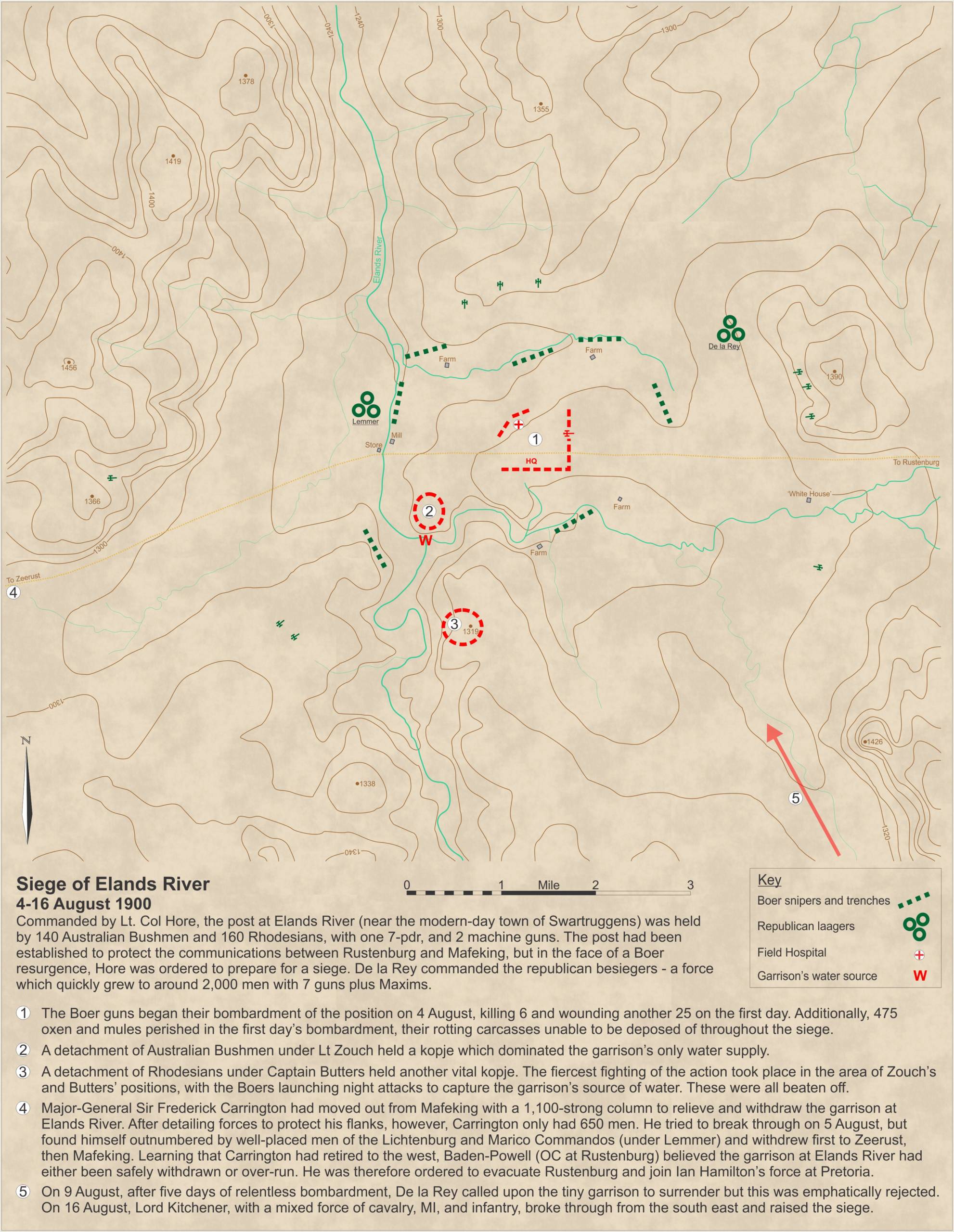 An Imperial relief column under Maj-Gen Carrington set off from Mafeking and attempted to break through from the east but was driven off. The defenders at Elands River remained resolute, however.

The fiercest fighting of the action was around the garrison’s water supply and De la Rey ordered night attacks to capture it, but these were all broken up and beaten off. Nevertheless, on the 9th, after five days of non-stop bombardment, De la Rey demanded Imperial surrender. This was politely declined, the Hore allegedly saying, ‘I cannot surrender. I am in command of Australians who would cut my throat if I did.’[ii]

De la Rey continued to bang his head against the Colonials until the 16th when he retreated in the face of another relief column, this time led by Lord Kitchener himself. The siege was thus raised: the pluck and determination of the Rhodesians and Australians had proved too much for De la Rey and his bittereinders.