The Fable of the Frog

Though a proud Afrikaner himself, Former Leader of the Pretoria Bar, Advocate J. W. Wessels made a speech in 1900 in which he described a rather unpleasant trait found in many of his kinsmen, and one which had played a large part in the Boer republics confidently declaring war on Great Britain the year before:

‘There is, however, one bad quality which has become prevalent amongst us Afrikanders, and that is the quality of conceit. It is especially noticeable in the rising generation of Afrikanders … the Young Afrikander reminds me of the fable of the frog that felt so confident that it could rival a bull in size, that it blew itself out until it burst … the young Afrikanders in the Transvaal and Free State gradually came to believe that they knew everything better, and could do everything better than any Englishman. They thought that because they, or rather their fathers, could hit a bottle at 200 yards there was no limit to their capacities … to suggest to the young Afrikander that he was not omnipotent was to be a traitor to one’s race. To tell the Kruger oligarchy at Pretoria that it was quite impossible to prevent the active and intelligent majority of the community from obtaining a voice in the future government of the State was enough to be jeered at called a fool … to point out their folly and to caution them that if they persisted in their foolish course, ruin would stare them in the face, was a sin that merited the contempt of every Afrikander. This conceit has brought ruin to many a Transvaal, Free State and Colonial home.’[i]

Of course, reading this sort of thing will upset the usual Defenders of the Myth, and they will no doubt simply squeal that this ‘a jingo source’ (ie. any source which they don’t like, and which fails to support their much-loved myth). Indeed, such is their pathetic determination, the fact that Wessels was a) Afrikaans, b) a well-educated man, senior in the legal field, and c) held high office in Kruger’s regime is by no means sufficient for them not to simply dismiss his words as those of a ‘jingo’.

Furthermore, anyone who spends any time in pubs in South Africa will have noticed that this trait has not entirely died out. Afrikaans men (and, I regret to say, it is a trait exhibited only by the men) of a certain social class still have a habit of spouting such ludicrous tall tales of marksmanship brilliance – the only real difference is that the repertoire of made-up bollocks has been expanded a little, and these days is just as likely to include incredible feats they have done in their Toyota Hi-Lux.

I experienced yet another example of this recently. I was lucky enough to arrive at the bar, just as the chap next to me started relating a story which occurred on a Farm Watch patrol. He had his spell-bound audience in the palm of his hand, as he explained how they spotted two black gentleman (not quite the term he used) climbing a fence 1900m away. He claimed that one of the other Farm Watch guys told him to take a shot at them as they so did, so he pulled out his rifle, loosed of a round, and – lo and behold – shot both of them dead with a single bullet.

While he basked in the star-struck adoration of everyone else, I pointed out to him that this would be one of the longest sniper kills in military history… but he didn’t bat an eye. Shaking my head, I left them to their world of make-belief, and later Googled sniper kills: 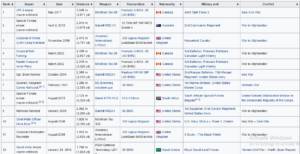 Alas, I can’t really fit this chart in terribly well, but this chap’s completely made up ‘double-kill-with-a-single-round’, would put him in 11th place in the all-time history of sniper kills – just behind CPO Chris Kyle, a Navy SEAL sniper so brilliant, that they made a film about his life:

When so many South Africans are happy to believe such unadulterated bullshit in pubs, it is little wonder that they don’t for a moment stop and question the equally fanciful rubbish they have been told about the Boer War for most of their lives.

[i] The Settlement After the War in South Africa, Farrelly, p.263