A few years ago, I enjoyed a trip on Rovos Rail from Pretoria to Durban. As one might expect, the journey included several stops / excursions along the way, one of which was to the Nambiti Game Reserve, near Ladysmith. The young game guide should probably have stuck to talking about the flora and fauna, instead of having a go at some military history… as the game reserve is very close to the site of the Battle of Elandslaagte, this chap decided to give us a potted history of the action, and assured us that the British wore red jackets, making it easy for the Boers to shoot them. Unable to let him spread this rubbish, I spoke up and he admitted he hadn’t really read much about it, but this is what someone told him.

Fair enough – he was just a young game guide and did not claim to be an expert on the Boer War. 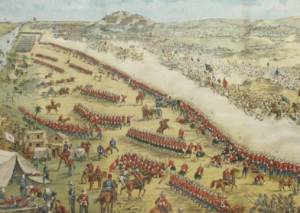 A painting of Omdurman, fought in the Sudan in 1898. Though the British fought in khaki, the artist decided to depict them in red, ‘because it looked better’.

Later that same day, we had another excursion, this time to a lodge near Spion Kop. Upon meeting the owner – a man who most certainly does consider himself a top authority on the conflict – I told him the story of the game guide, expecting him to share my incredulity over his claims. Imagine my surprise, however, when this chap nodded sagely, and said, ‘He must have been referring to the troops who had retreated south after Talana Hill’…
I was amazed: WTF was he talking about? Firstly, no troops who had fought at Talana fought again (the very next day) at Elandslaagte, so Christ alone knows what he meant by that. And, more importantly, even if any of the troops at Talana Hill had indeed fought again at Elandslaagte, that still wouldn’t explain the claims of Tommies wearing red.
Of course, I pointed all this out to him, explaining that no British troops wore red in the Boer War of 1899-1902, and, furthermore, the last significant action in which the British infantry wore their famous red coats was the Battle of Ginnis, fought in 1885[i]. With matchless arrogance, he replied that I had no idea what I was talking about, and he looked forward to getting an email from me, accepting he was correct and apologising to him. 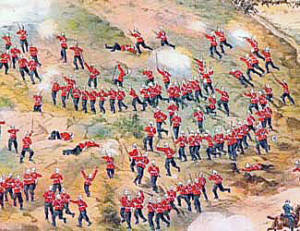 An artists impression of Talana Hill… just like the painting of Omdurman, this is not to be considered accurate

Well, he did indeed receive an email from me, providing copious references for everything I had told him, and CC’ing the late Ken Gillings, who was the top man of the Battlefield Guides Association in Natal. Ken followed up with an email of his own, completely supporting my position, and asking him to provide his sources as this would completely change our whole understanding of the war. Thoroughly chastened, the best this chap could do was tell Ken he had seen a painting in a museum of British troops wearing red… and that was the sole basis for his nonsensical claims.
Well, guess what – there’s a photo of me in uniform hanging up in my mother’s dining room – I’m wearing a kilt, a khaki jacket with brass buttons, and a tie… but that’s not exactly what the British army wore on active service in the 1990s.

Despite a few wild claims from various unschooled quarters, and several artists’ impressions of various battles, the British Army had completed the transition from red coats to khaki (via a very short-lived flirtation with grey) long before the Boer War: khaki had been introduced for service in Africa as early as 1882. Indeed, and despite the boring, baseless claims that the British army was ‘stuck in the past’, ‘hidebound by tradition’ and ‘cursed with a Peninsular mentality’, certain units had started moving away from colourful uniforms over a hundred years prior even to that.

The elite Rogers’ Rangers, a 600-strong light infantry unit was raised from North American loyalists to support the British Army in the French and Indian Wars of the mid-1700s. Clad in green uniforms for camouflage, the Rangers excelled at reconnaissance and special operations behind the lines, and were greatly valued by the British high command. The name of this formidable and unconventional unit lives on in the US Army Ranger units[ii]. 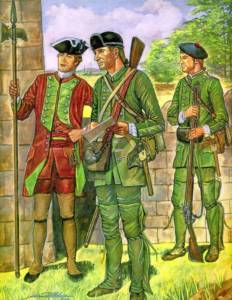 Roger Rangers, next to a more conventionally attired soldier

Another example is the 60th (known as the Kings Royal Rifle Corps by the time of the Boer War),  a regiment able to trace their lineage to the 62nd (Royal American) Regiment, raised in 1755 and re-numbered as the 60th two years later[iii].  The Royal Americans were tasked with defending the original 13 colonies against the French and Indians, and individual initiative was encouraged while the discipline of traditional line regiments was still maintained. As they would be fighting in the forests and around the lakes of the American colonies, the regiment was trained and equipped unconventionally, carrying hatchets instead of swords and with coats and hats cut so as to enable the men to move swiftly through woods.
Combining the best aspects of a line infantry regiment with those of an irregular unit, the 60th proved their worth in various frontier campaigns, including the conquest of Quebec. In 1797, a 5th battalion was raised and equipped entirely with the revolutionary new Baker rifle, a weapon which was then partially introduced to the other four battalions of the regiment, with rifle companies replacing their light companies. Recognizing the effectiveness of the 60th, the unit was expanded to seven battalions (three of which were entirely equipped with rifles, and clad in green rather than the traditional red) by the end of the Napoleonic Wars. 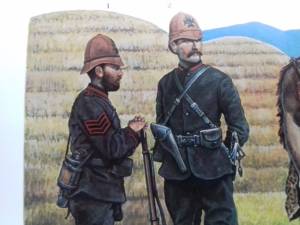 Arguably the most famous British unit of the Napoleonic Wars (partially thanks to the exploits of the fictional Richard Sharpe) was the 95th Rifles. Though they came under General Moore’s command, the regiment was raised by Colonel Coote Manningham and Lieutenant-Colonel the Hon. William Stewart as ‘an experimental corps of riflemen’ in 1800. They were equipped with the new Baker rifle and attired in a practical dark-green uniform with black facings and black belt kit. Bugles, rather than drums, were used for communication, colours were not carried, and individual initiative was encouraged. Building on the lessons learned in North America and from the success of the 60th, the Riflemen were trained to fight in pairs and to make use of cover and aimed shots, rather than volley fire. 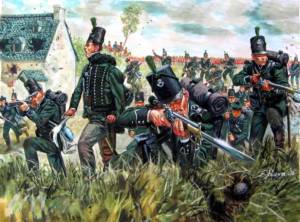 So successful was the ‘experimental corps’, that the 95th was expanded to three battalions, all of which, along with other light infantry units, saw service in the Peninsula as part of the elite Light Division. Sometimes referred to as ‘Wellington’s SAS’, the riflemen quickly made a name for themselves—at the Battle of San Marcial, fought near  the Spanish town of Irun on 31 August 1813, for example, a 70-strong company of the 95th occupied loop-holed buildings and held off a 10,000 strong French division for several hours until ordered to withdraw.  After also serving with distinction at Waterloo, the 95th was recognized by all as too important a unit to be lost in the post-war defence cuts: in a move not granted to older, more ‘illustrious’ regiments, the 95th was thus secured by being taken out from the line of the British Army altogether and, in 1816, became the Rifle Brigade.

Another example is the famous Corps of Guides of the British Indian army, founded in 1846. This was the first unit to wear khaki (rather than green) and was also unique in being a mixed infantry-cavalry unit, quickly gaining the stature of a corps d’elite on the North West Frontier. The Guides received better pay than other units, thus allowing recruiters to pick and choose only the very best applicants. 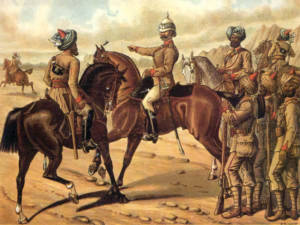 By the time of the Second Boer War, it was not just certain units which had moved away from red. All British infantry, including the Guards, fought in khaki during the conflict, as they had for years previously. The cavalry, artillery and all other support units were similarly clad. Indeed, the only slight exception which springs to mind was a unit of Royal Marine Light Infantry who, having been rushed to the theatre to stem the Boer invasions, arrived from the Far East wearing white ‘tropical uniforms’ – which were swiftly stained muddy-brown using tea / coffee long before the marines saw action.

One may compare this forward-looking pragmatism to other Great Powers of the period: the Japanese infantry wore blue uniforms at the start of the Russo-Japanese War of 1904–5, while Russian officers went out of their way to be as conspicuous as possible in their starched white tunics.  As late as the Great War the French army initially sent its long-suffering infantrymen into action wearing blue double-breasted overcoats and bright red trousers: the famous ‘pantalon rouge’.  It was not until the start of 1915 that the new (and only slightly less colourful) ‘horizon blue’ uniforms were in general use. 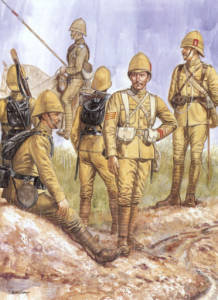 So basically, if a Battlefield Guide ever tells you the British infantry wore red during the Boer War (1899-1902), stand up and immediately demand your money back – he simply has no idea what he is talking about. Why do they make things up? Well, you’d have to ask them, but my guess is a bizarre desperation to pretend that the British army was some sort of risible, archaic organisation, worthy only of being mocked… rather than, in reality, a well trained, well equipped force which fought and won a guerrilla war thousands of miles from home. 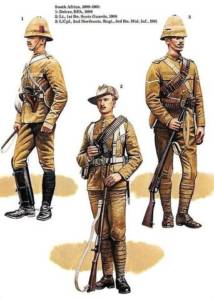 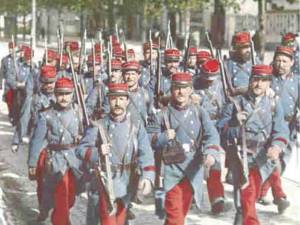 NOTES:
[i] As usual, there are various tiny caveats to this: troops deployed to Zululand during the civil war in 1888 are reported to have worn red on active duty, but did not see significant action. Later, during the Sudan campaign of the late 1890s, the gunners of a battery of British Maxims attached to the Egyptian army preferred to wear their scarlet home-service uniforms to the standard service-issue khaki.