The Power of Propaganda

As much as it pains me to say it, the Apartheid regime propagandists, modern-day fanatical Defenders of the Myth, and other assorted ‘useful idiots’, really have done an amazing job of entrenching their utterly false version of the Boer War deep into the South African psyche. The successful propagation of their self-serving, self-pitying nonsense even puts the work of the infamous Dr Goebbels to shame. 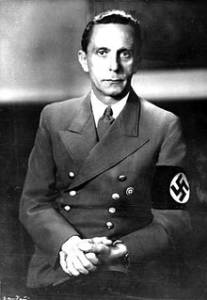 Dr Goebbels – another master of peddling lies and myths

I was reminded of the success of this propaganda offensive yet again on a recent visit to Wagon Hill – the scene of a battle fought on the southern heights of Ladysmith’s defensive perimeter on the 6th of January 1900. One of the other visitors – a very intelligent, well educated, well-travelled, professional South African – made the remark that ‘each Boer was worth ten Brits, as they were defending their homeland’. If even someone that well-educated has been so thoroughly taken in by the propaganda which skews popular perception of the Boer War in South Africa, one can only imagine the sort of rubbish the knuckle-draggers think.

This sort of thing is, of course, exactly the sort of faux-victimhood cobblers that Defenders of the Myth still like to peddle, despite all the evidence to the contrary. Needless to say, it is factually wrong on so many different levels that it perfectly sums up the nonsense that most South Africans believe about the Boer War.

Firstly, as the Battle of Wagon Hill was a British victory, the notion that each Boer was ‘worth ten Brits’ is self-evidently rubbish. Despite latter-day myths of Boer martial brilliance, their attack was poorly coordinated, with thousands of Boers simply refusing to take part, and thus the planned diversionary attacks on other sectors of the perimeter either quickly fizzled out or came to nothing. The result of this cowardice / ill-discipline / inept leadership meant that the British garrison commander, Sir George White, was able to feed reinforcements to Wagon Hill throughout the day.
Though the 4,000-or-so Boers who did deign join the attack at Wagon Hill fought bravely for much of the day, they had no answer to the resolution of the Tommies and, most spectacularly of all, fled in the face of a bayonet charge by three companies of the Devons – a charge which finally sealed the British victory.

Secondly – and something which should be even more obvious, were it not for decades of relentless anti-British propaganda – the notion that the Boers were ‘defending their homeland’ at Wagon Hill is complete and utter tripe… though I think it would be fair to say that most South Africans hold a pretty similar view. The inconvenient reality (at least, inconvenient to those – including certain Professors of History – who still cling pathetically to Apartheid-era lies) is that the Battle of Wagon Hill was fought deep inside Natal – which was, like it or not, a British colony at the time.
The Boers who fought at Wagon Hill were from the Transvaal and the Orange Free State, and were thus nowhere near their respective homelands: they were invading forces, hell-bent on driving the British from southern Africa and grabbing their territory. They were clearly ‘defending’ nothing – Kruger had started the war by invading British territory, and his barely-disciplined forces had rampaged through northern Natal, looting, burning, re-naming towns and annexing land which belonged to other people.