De la Rey’s victory over Lord Methuen’s column at Tweebosch on the 7th of March 1902 is one of the more trumpeted battles of the Boer War. Modern day True Believers can hardly contain themselves as they squeal how the plucky old Boers vanquished the British, then – God-fearing Christian heroes that they were – magnanimously cared for the captured, and badly-wounded, Lord Methuen.

Unfortunately for those who still continue to push Apartheid-regime propaganda to this day, there is a rather different side to the battle, and one which gives a much better indication of the sort of men many of the bitter-einders really were. The files WO 108-117 in the UK’s National Archives should be required reading for anyone who still wants to push the myth of Boer Sainthood during the conflict, and I present some photos of them below to show what was really happening during the Guerrilla War, and how these Bible-thumping ‘heroes’ really behaved towards anyone unlucky enough to be at their mercy: 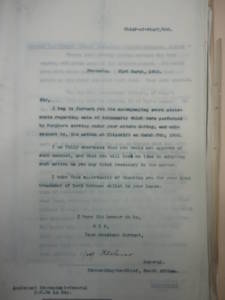 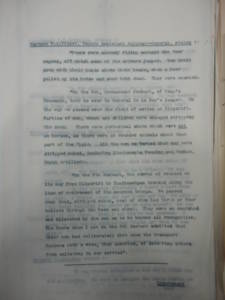 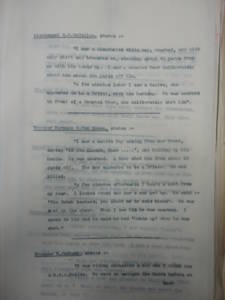 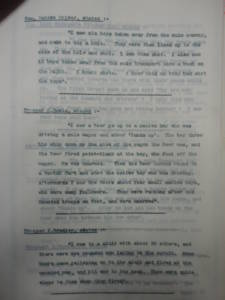 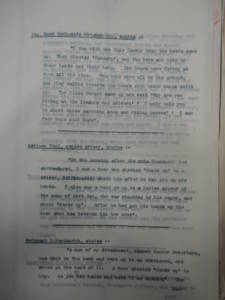 In case it is difficult to read them, the pictures show a letter sent by Lord Kitchener to De la Rey on the 31st of March, 1902. The missive reads:

Sir,
I beg to forward you the accompanying sworn statements regarding acts of inhumanity which were performed by Burghers serving under your orders during, and subsequent to, the action at Klipdrift [Tweebosch] on March 7th, 1902.
I am fully convinced that you would not approve of such conduct, and that you will lose no time in adopting such action as you may think necessary in the matter.
I take this opportunity of thanking you for your kind treatment of Lord Methuen whilst in your hands.

The following testimonies are then attached:

Captain W.A. Tilney, Deputy Assistance Adjutant-General, states:-
“Boers were already riding amongst the rear wagons, off which some of the drivers jumped. Two knelt down with their hands above their heads, when a Boer pulled up his horse, and shot both dead. They were unarmed.
On the 8th, Commandant Joubert, of Kemp’s Commando, took me over to General De la Rey’s laager. On the way, we passed over the field of action at Klipdrift. Parties of men, women and children were engaged in stripping the dead. There were periodical shots which were not at horses, as there were no wounded animals about that part of the field. All the men we buried that day were stripped naked, including Lieutenants Venning and Nesham, Royal Artillery.
On the 9th instant, the convoy of wounded on its way from Klipdrift to Taaiboschpan trekked along the line of retirement of the mounted troops. We passed many dead, stripped naked, most of whom had three or four bullets through the head and chest. There were so scorched and blistered by the sun as to be beyond all recognition. The Boers whom I met on the 8th instant admitted that their men had deliberately shot down the transport Natives with a view, they asserted, of deterring others from enlisting in our services”.

Lieutenant S.H. McCallum, states:-
“I saw a dismounted white man, unarmed, and with only shirt and breeches on, standing about 40 yards from me with his hands up. I saw a mounted Boer deliberately shoot him about two yards off him.
A few minutes later I saw a Native, who appeared to be a Driver, with his hands up. He was unarmed in front of a Mounted Boer, who deliberately shot him”.

Trooper Hermann S. Van Eeden (nice old English name), states:-
“I saw a native boy coming from our front, saying ‘if you please, Baas…’, and holding up his hands. He was unarmed. A Boer shot him from about 10 yards off. The boy appeared to be a Driver. He was killed.
A few minutes afterwards, I heard a shot from my rear. I looked round and saw a man get up. He said:- ‘You Dutch bastard; you shot me in cold blood’. He was shot in the chest. When I saw him he was unarmed. I spoke to him and he said he had ‘hands up’ when he was shot”.

Trooper F. Jackson, states:-
“I was riding alongside a men who I think was B.S.A.Police. We were in amongst the Boers before we knew it. A Boer told him to ‘hands up’. He was handing up his rifle when another Boer came up and shot him. We had halted. He was killed”.

Trooper C.J.J. Van Rensberg (another fine ‘Jingo’ name), states:-
“I saw four Cape boys, unarmed and dismounted, come towards the Boers with their hands up. They were shot dead”.

Corporal H. Christopher, states:-
“I saw a young Native boy riding a horse and leading another. He was unarmed. A Boer road up to him and told him to dismount. No sooner had he done so than the Boers shot him in the back of the head and killed him”.

Sergeant T. Barrow, states:-
“After surrendering, I saw Captain Tuckey’s native boy, called ‘Clean Boy’, in the act of surrendering with his hands up over his head. I saw a Boer shoot him. He was unarmed.
I also saw two other native boys shot. They were Transport boys and unarmed.
I heard a Boer say plainly in English:- ‘What shall we do? Shall we shoot the blacks and spare the whites, or what?’”.

Trooper C. Davies, states:-
“I saw a Boer go up to a native boy who was driving a mule wagon and shout ‘hands up’. The boy threw his whip down on the side of the wagon the Boer was, and the Boer fired point-blank at the boy, who fell off the wagon. He was unarmed. Then the Boer turned round to a Scotch Cart and shot the native boy who was driving. Afterwards I saw the Boers shoot four small native boys, who were camp followers. They were running after the Mounted troops on foot, and were unarmed”.

Trooper T. Bradley, states:-
“I was in a sluit with about 30 others, and there were two wounded men laying in the spruit. Some Boers came galloping on to the sluit and fired at the wounded men, and hit one in the neck. They were quite close to them when they fired”.

Jim, Lord Methuen’s Kitchen Boy, states:-
I was with the Mule Convoy when the Boers came up. They shouted ‘hands up’, and the boys all held up their hands and their hats. The Boers were firing at them all the time. The boys were all on the ground, and they walked towards the Boers with their hands still up. The Field Cornet came up and said, ‘Why are you firing at the leaders and drivers? I only told you to shoot those carrying arms and riding horses!’ I saw four boys shot here”.

Adriaan Pohl, native driver, states:-
In the morning after the mule Transport had surrendered, I saw a Boer who shouted ‘hands up’ to a driver, deliberately shoot him after he had put up his hands. I also saw a Boer go up to a Native driver of the name of Gert Gey, who was standing by his wagon, and shout ‘hands up’. He had put his hands up the Boer shot him between his two eyes”.

Sergeant D. Heydenryk, states:-
“A man of my detachment, named Gunner Roberts, was shot in the back and went up to an ambulance, and shoot at the back of it. A Boer shouted ‘hands up’ to him. He put up his hands and said ‘I am wounded’. The Boer….”
and so it goes on.

Though certain Professors of History still like to push the fallacy of the bitter-einders being noble, plucky freedom-fighters, skipping about the veldt, loved by the people and feared by the British, the reality is that many were cold-blooded murderers. I realise this doesn’t fit with the carefully cultivated myths of Boer victimhood and British beastliness, but the simple reality that, today, the bitter-einders would be known as terrorists – plain and simple.