One of the most entertaining things in life is watching the mental gymnastics which Defenders of the Myth™ put themselves through in order to maintain their preferred version of the Boer War. These people will shamelessly twist themselves in knots to justify (or explain away) the simple, undeniable reality that the Boer War started when the two Boer republics invaded British territory. Not only that, but their aim was openly stated as being to form an ‘Afrikaans Empire from the Zambesi to the Cape’ – which explains why they annexed the land they seized, and re-named the towns they grabbed.

To True Believers, however, none of this features in their bizarre version of the war. I was recently sent this newsletter by a friend: 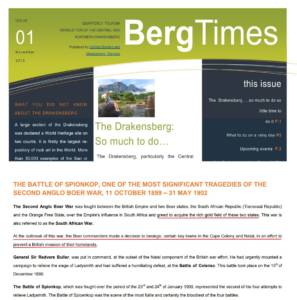 You’ll notice I have underlined the most blatant pieces of balderdash. I love the way that this version claims that British ‘greed’ led them to want to grab goldfields in the two republics. The reality is, of course, that the goldfields were in the Transvaal, not the Orange Free State. What is more, the goldfields were owned by foreign (mainly British) investors already, so this fellow would have us believe the British were greedy to grab goldfields which British business men already owned? Remarkable. And, as the final nail in the coffin of nonsense, upon annexing the Transvaal, the British Government didn’t seize any goldfields from any of the owners – and they then granted self-rule to the Transvaal just 4 years later.

As Sir Arthur Conan-Doyle put it in 1902:
‘The gold mines are private companies, with shares held by private shareholders, German and French, as well as British. Whether the British or the Boer flag flew over the country would not alienate a single share from any holder, nor would the wealth of Britain be any way greater … how is Britain the richer because her flag flies over the Rand? The Transvaal will be a self-governing colony, like all other British colonies, with its own finance minister, its own budget, its own taxes, even its own power of imposing duties upon British merchandise … We know all this because it is part of our British system, but it is not familiar to those nations who look upon their colonies as sources of direct revenue to the mother country.’

And if his dose of inconvenient facts don’t go down well, how about this from the prize-winning French economist, Yves Guyot, writing in 1900:
‘[Britain’s critics are] perfectly well aware that England will derive no benefit from the gold mines, nor will she take possession of them any more than she has done of the gold mines of Australia. They are private property.’

Still, things like historical reality and facts do not seem to bother Defenders of the Myth™.

So let’s move onto the second ridiculous claim… that the poor old Boers ‘made the decision to besiege, certain key towns in the Cape Colony and Natal, in an effort to prevent a British invasion of their homelands’.
If I understand this outburst correctly, we are being asked to believe that the Boers’ master plan to ‘prevent an invasion’ was to start a war with the Greatest of the Great Powers of the Age? Perhaps a rather more sensible way to ‘prevent an invasion’ was not to pick a fight with Great Britain? I wonder if the writer would also sum up the causes of the Second World War by saying: ‘Germany made the decision to besiege certain key towns in France and Poland in an effort to prevent an invasion of their homeland’? That is every bit as nonsensical a contention, especially given that the Imperial garrison in southern Africa was, at the time, a mere fraction the size of the republican forces.

Forgetting the invasion of Natal for a moment, quite how this fellow thinks annexing vast tracts of semi-desert in northern Cape Colony and Bechuanaland, and laying siege to the dusty, one horse town of Kuruman, was going to ‘prevent an invasion’ is anyone’s guess. Indeed, what really makes these frantic attempts at post-factual justifications so entertaining is that they don’t actually fit with any of the facts: the Boers did not invade Natal with the aim of laying siege to Ladysmith: they invaded Natal to annex Natal. The simple fact is that Boer invasion forces rampaged well past Ladysmith, looting their merry way almost as far at Nottingham Road… before they retreated back in the face of Imperial reinforcements. No less a man than General Louis Botha later moaned that only Joubert’s timidity prevented him ‘coming to Durban to eat bananas in 1899’. Things were no different over on the western front, where a boastful General Cronjé had assured his men they would ‘drive the Rooinek into the sea’ and be in Cape Town within a month.

As entertaining as Defenders of the Myth™ always are, it is nonetheless disappointing that their endless codswallop should be spewn forth in a newsletter aimed at tourists. Who knows – someone might even be naïve enough to believe their nonsense.