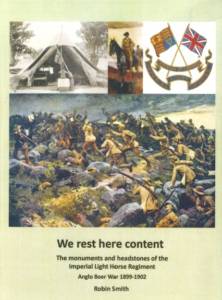 One of the most remarkable regiments of the Boer War was the Imperial Light Horse. Raised just prior to the Boer invasions, the ILH was formed largely from the ex-Johannesburg uitlanders – the (mainly) English-speaking men who had built Johannesburg, developed the gold mining industry and thus transformed the economy of the Transvaal… and yet who were unfairly denied the franchise by Kruger’s corrupt gaggle. While the Boer War was just another conflict for the veteran Tommies of the British Army, the uitlanders of the ILH were fighting a highly personal war, summed up by their regimental motto: ‘Imperium et Libertas’ (‘Empire and Freedom’). It is perhaps not surprising, therefore, that they quickly earned an enviable reputation. Hard-riding, hard-fighting and well led, Imperial Light Horsemen fought from the very start of the war (winning two VCs at Elandslaagte), right through to the very end, where they excelled at chasing down the last gangs of bitter-einders. 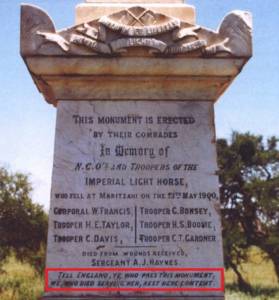 “Tell England, ye who pass this Monument, We, who died serving her, rest here content”

I have long been an admirer of this regiment, and was thus delighted to see a new book on the subject – and was not disappointed. Written by the estimable Robin Smith, a doyen of the South African Military History Society and one of the most knowledgeable men on the Boer War I have met, ‘We Rest Here Content’ is a worthy addition to any library on the conflict. The ‘official’ story of the Imperial Light Horse in the Boer War was written in 1937 by the regiment’s intelligence officer in that conflict, Lt George Gibson – Gibson’s work is excellent and ‘We Rest Here Content’ does not seek to re-invent the wheel.

Instead, it is the result of many years of field work, which has seen Robin travel the length and breadth of South Africa to visit all the monuments and graves connected with the Imperial Light Horse and linking these with a narrative of the actions concerned. The work also contains a complete reproduction of an unsigned manuscript written by an Australian member of the regiment – a treasure trove of information which is itself worth buying the book for. ‘We Rest Here Content’ is thus more of an encyclopedia of the Imperial Light Horse, a veritable compendium of everything one could ever wish to know about this regiment, and the part it played in the defeat of Kruger’s ambitions. Starting with a background to how the ILH were raised, the work covers every action they fought in during the conflict, and is peppered with excellent anecdotes which give the reader a flavour of the calibre of men who fought for ‘Imperium et Libertas’.  There are also highly detailed casualty lists, lists of the medals and awards won by members of the regiment, the text of ‘Mentioned in Despatches’, and dozens of full colour photos and numerous excellent maps.

It is a work of magnificent scholarship and a fitting tribute to one of the most interesting regiments of the war. 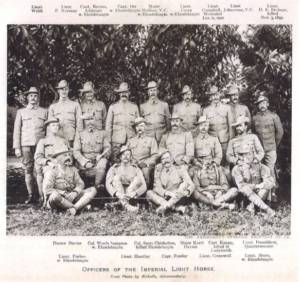 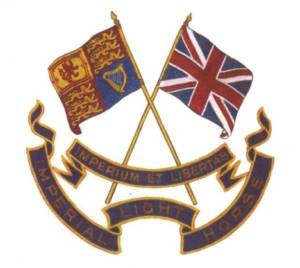