I have lost count of how many times I have been informed by South Africans that their grandparents were ‘murdered’ in the concentration camps. There seems to be a widespread and bizarre desperation to bask in the warm glow of victimhood by claiming close personal connections to the camps – even if such claims utterly defy the laws of both biology and arithmetic.

I met one middle-aged chap in a bar, for example, who – on hearing that I had written on the Boer War – passionately announced that ‘the Brits’ murdered three of his grandparents in the concentration camps. He clearly hoped that I would be suitably impressed / humbled and that he’d be able to bask vicariously in some sort of made-up victimhood.
Instead, I pointed out that his claim obviously meant his parents must both have been born in 1902 at the very latest… which would mean this attention-seeking idiot’s mother must have been in her 70s when he was born (not to mention that his father must have been South Africa’s answer to Hugh Heffner). Needless to say, he simply got angry and started shouting and swearing at me, for having the temerity of challenging his utter bullshit.

Rather entertainingly, I enjoyed a repeat of this on Quora recently. A question about Canada’s involvement in the War was gleefully seized upon by another attention seeker, who unthinkingly decided to use it as an excuse to bang his little drum of made-up victimhood: 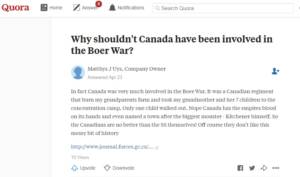 Yup – the Canadians are ‘no better than the SS themselves! ‘off’ course’, apparently. Hilarious. Anyway, it was his claim that his ‘grandparents farm’ (sic) was burned down and that his ‘grandmother and her 7 children’ were taken into ‘the’ camp (only one of which walked out) which caught my eye. All very heart-breaking… were any of it actually true. Quite obviously (to anyone except, Meneer Uys, presumably), if only one of his grandmother’s children walked out the camps, then this lucky survivor can only have been either his mother or his father. So I asked which it was, only to receive a most bizarre response and the seemingly obligatory mention of Lizzie van Zyl: 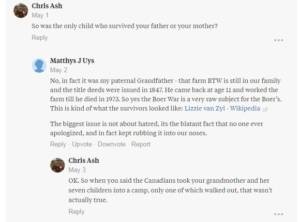 Meneer Uys shamelessly tried to lie his way out of the mess he’d got himself into:

And then he resorted to the normal abuse and insults after being so blatantly caught lying: 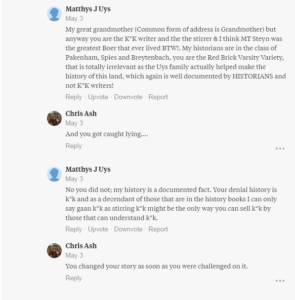 At this point, his lies thoroughly exposed, Meneer Uys scuttled away to lick his wounds.

Exchanges like this are the sort of thing which prompted me to challenge the rubbish one hears about the Boer War, and the way it is perceived – especially in South Africa. Meneer Uys has probably told that story (or various variations of it, depending on his mood / state of inebriation) at hundreds of braais over the years. On each occasion, surrounded by like-minded and equally ill-informed people, he has no doubt enjoyed the attention and playing the victim of something that didn’t happen. How infuriating it must have been for him to have his made-up sob story exposed as the nonsense it is.