Quora can always be relied upon for amusement. The concept of the site is good, but nine times out of ten, the questions posed are either totally inane (“who was the toughest General, like, ever?”) or could just have been Googled (“what is the capital of Swaziland?”). Of late, I have noticed there is also a trend towards asking a question which starts with a totally false premise: “Why did the US violate New Zealand’s neutrality in WW2?” was a particular favourite of mine.

Things were little better when I received a notification that someone wanted me to answer this question the other day:

And here is my response:

A fairly straightforward question, I think, and one which I answered clearly. I eagerly await someone asking: ‘Why did the British kill Germans?’ next.

The thing with Quora is, however, that one can always rely on some clown popping up to grind his personal axe. And, sure enough, my perfectly straightforward (and correct) response soon elicited this response: 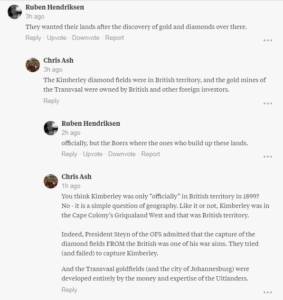 Ruben (a man who proudly describes himself as: ‘Dutch. Geographer (MSc). Atheist. Amateur Historian’), was quick to bring up the fallacy that the wicked old Brits were killing Boers to get their hands on the gold and diamonds – though, as usual for such types – disappeared as soon as this nonsense was challenged with inconvenient things like actual facts.

There is no doubt that the gold mines of the Witwatersrand were located in the Transvaal – though as these were already owned by foreign (mainly British) investors, there was no motivation for the British Government to want to ‘steal’ them. Desperate to absolve the Boers of all wrong-doing whatsoever, and frantically trying to make their rather pathetic argument a little more compelling, therefore, it is common to throw ‘the diamonds’ into any anti-British tirade about the Boer War… this despite the fact that the Kimberley diamond fields were undeniably in British territory. Anyone seeking to claim otherwise has either never looked at a map or is simply lying – and as Ruben says he is a ‘Geographer (MSc)’ we can draw our own conclusions there. Of course, his other claim that Kimberley was only ‘officially’ in British territory would be like claiming Paris is only ‘officially’ in France or Antwerp is only ‘officially’ in Belgium.

But it is not just the odd Dutch Geographer (MSc) who spouts this rubbish. Indeed, given how laughably easy it is to disprove, it is amazing that the fantasy of Britain ‘attacking the Boers to steal the diamonds’ is trotted out so regularly. How many gallons of Kool Aid must these True Believers have drunk before they genuinely think that Britain ‘started a war’ (sic) to grab diamond fields which were already in British territory?

One wonders if these people also believe that the evil old Brits also ‘attacked Argentina in 1982 to grab the Falkland Islands’? Or that America ‘attacked Japan in 1941 to grab Hawaii’? Or that Poland ‘attacked Germany in 1939 to grab Warsaw’?

The ill-considered fantasies of modern-day Kruger groupies – proudly parading their total ignorance of both history and geography – means we can always enjoy endless entertainment.