One would have thought that the relentless propaganda offensive to portray the British Empire as some sort of ghastly Bogey Man would have died with the demise of the Apartheid government. Amazingly, however, the new regime has taken up the baton and appears determined to spread the same sort of misinformation as their predecessors.

It is well known that the Imperial authorities established camps for blacks during the Boer War, and that many thousands tragically perished while housed in them. Far from being some sort of attempt at ‘genocide’ however, these were refugee camps, set up to house those poor souls who were facing starvation and the murderous attentions of the bitter-einders:

“Following the British annexation of the Transvaal and Orange River Colony and the beginning of the guerrilla war, the military administration was faced with two immediate problems concerning black refugees: first, to alleviate hardship and destitution among those Africans whose livelihood had been destroyed by military operations; and secondly, to give protection to black communities in danger of suffering at the hands of the Boer commandos for the assistance they had given to Imperial forces. Already by the end of July 1900 groups of blacks had begun entering the British lines and garrison towns to seek protection from military operations and punitive raids on their settlements.”[i]

Large numbers of such refugees flooded into Vryburg, with similar scenes in the western Transvaal, where many blacks with herds of livestock sought the military protection offered by Imperial forces. Many refugees staggered into British-held towns, starving and destitute:

“The inhabitants of Zwaartboys, their stad having been destroyed by General Grobler, were permitted to settle close to Wolmaransstad and some assistance given them.”[ii]

In garrison towns attempts at relief were made by District Commissioners, but by the end of 1900, it was apparent that a coherent policy would be needed to deal with the tide of black refugees fleeing from the guerrilla onslaught: this was a humanitarian crisis caused almost entirely by the murder and mayhem wreaked by the bitter-einders

Not only did the bitter-einders’ terrorism directly prompt the establishment of the refugee camps for blacks, the Boers cheerfully went on to target the them as a handy source of supply, stealing food from those already in a desperate condition. Pickets were raised to defend the camps against night raids but there were still many successful attacks. In early 1901 three raids by bitter-einders on the black refugee camp at Potchefstroom netted 258 cattle and 400 sheep, as well as leaving one refugee dead. Attacks on other black refugee camps saw the bitter-einders making off with hauls of money, food, and clothing, while one such raid resulted in the deaths of thirteen residents[iii] (undoubtedly these are included in the statistics of those ‘murdered’ by the British today).

Even black refugees outside the formal British camp system were considered fair game by the Boers. In February 1902, a raiding party fell on an unofficial refugee settlement in the ThabuNchu area in the Orange River Colony, stealing 590 cattle, 32 horses, and 6,625 sheep and goats from these poor wretches.

This inconvenient reality has not stopped some absolving the bitter-einders of all responsibility, and instead (with tedious predictability) pretending that what the ‘wicked British’ actually did was to herd blacks into camps for the purposes of systematically murdering them; which would have been a truly bizarre thing to do, given that non-whites in Southern Africa overwhelmingly backed the Empire over the Boer republics.

It is one thing to merely to say such rubbish around the braai, or even write it, but the town council of Aliwal North decided to up the ante even further. Lacking any genuine graves to make their desired political point, they shamelessly (if rather ingeniously) simply appropriated a random graveyard to their devious purposes, thereby creating a fictional shrine to a fictional Imperial ‘genocide’.

The almost incredible tale was exposed in South Africa’s Sunday Times on the 15th of April, 2018, and is well worth sharing in full: 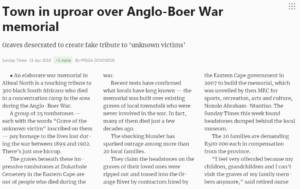 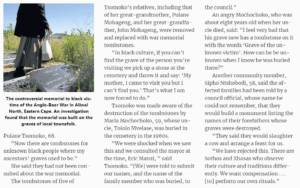 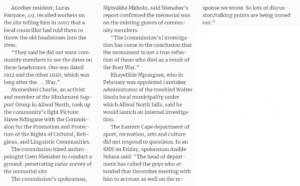