‘Comical Ali’ and the Boer War

The Invasion of Iraq in 2003 was memorable for the rantings of the Iraqi Government spokesman, Muhammad Saeed al-Sahhaf. Better known to British audiences as ‘Comical Ali’ and to those in the States as ‘Baghdad Bob’, this babbling clown would appear on TV every night, cheerfully explaining away defeat after defeat. 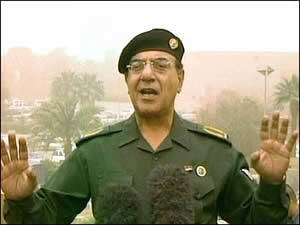 Even as the Iraqi army disintegrated on live TV, old Comical Ali would gamely pop up wearing a Frank Spencer beret and Bo’ Selecta glasses, endeavouring to convince the world that everything was actually going according to Saddam’s masterplan. The surreal and deluded commentary on the war he offered soon descended into farce, turning him into something of a minor celebrity in the west, and spawning his own website and endless memes: 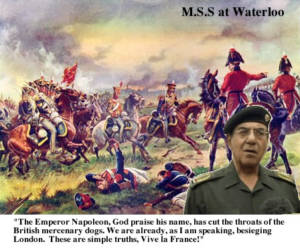 As entertaining as the memes are, if anything, his real life utterances were actually even more ridiculous. Never a man to let reality get in the way of a good story, to the fevered mind of Comical Ali the rapid advance of Coalition forces, for example, was actually a good thing:

“Yes, the American troops have advanced further. This will only make it easier for us to defeat them”

“The situation is excellent, they are going to try to approach Baghdad…and I believe their grave will be there.”

“The shock has backfired on them. They are shocked because of what they have seen. No one received them with roses. They were received with bombs, shoes and bullets. Now, the game has been exposed. Awe will backfire on them. This is the boa snake. We will extend it further and cut it the appropriate way.”

Similarly, the destruction of Saddam’s air force and the panic-stricken rout of the Iraqi army was explained away thus:

“Our armed forces, according to their tactics, are leaving the way open”

“We have them surrounded in their tanks”

“Now even the American command is under siege. We are hitting it from the north, east, south and west. We chase them here and they chase us there. But at the end we are the people who are laying siege to them. And it is not them who are besieging us.”

When Coalition troops captured Umm Qasr and Basra, an undaunted Comical Ali reinvented these defeats as actually being part of the plan:

“It’s a small town [Umm Qasr – in reality, Iraq’s only deep water port], it has only a few docks… now they are in a trap”

“We besieged them and killed most of them, and I think we will finish them soon.”

Even as TV footage showed American forces capturing Baghdad Airport and then the City itself, this stark reality was simply waved away in trademark Comical Ali style:

“They are not in Baghdad. They are not in control of any airport. I tell you this. It is all a lie. They lie. It is a Hollywood movie. You do not believe them.”

“I triple guarantee you, there are no American soldiers in Baghdad.”

“They’re not even [within] 100 miles [of Baghdad]. They are not in any place. They hold no place in Iraq. This is an illusion … they are trying to sell to the others an illusion.”

“I can say, and I am responsible for what I am saying, that they have started to commit suicide under the walls of Baghdad. We will encourage them to commit more suicides quickly.”

His energetic babblings made for great – if rather surreal – entertainment and there were calls for him to be given his own TV show after the war when he was captured. Instead, his 15-minutes of fame over, he was released by US forces and slipped into obscurity in the UAE. 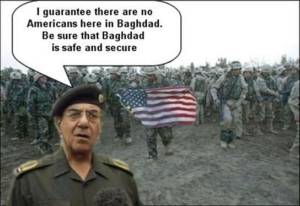 Though Comical Ali was certainly in a league of his own, many of the pillars of the long-established myth about the Boer War are actually not too dissimilar to the nonsense he treated us to.

The fact that the war was started by republican invasions of British territory, for example, is waved away by many using the sort of explanations of which Comical Ali would be proud. Tens of thousands of Boer horsemen poured over the borders to invade the territories of Natal, Cape Colony, Rhodesia, Zululand and Bechuanaland. They annexed the land they grabbed, re-named the towns the captured, set up tax collection systems and implemented their racist laws… but to some deluded souls, these blatant invasions were not acts of aggression at all:

“Ah! But the Boers never really wanted to invade Natal or the Cape Colony! It was all a masterplan! Sure, they repeatedly said they wanted to capture Durban and to establish a ‘Third Republic’ in the Cape… but they didn’t really mean it! It was an entirely defensive invasion! Not really an invasion at all, actually – all they really wanted to do was take up ‘defensive terrain just across the border’! The plan actually worked perfectly – and the stupid old Brits fell for it hook, line and sinker!”

Similarly, over the on the Western Front, the invading Boers were quickly driven from their carefully prepared positions by Lord Methuen’s First Division at the Battles of Belmont and Graspan, fleeing at the first sign of a glinting bayonet. But, bizarrely, these defeats have also been re-invented as examples of republican martial brilliance:

“Ah – but they never wanted to hold those positions in the first place! Running away as soon as they came under attack was all part of the plan! They wanted to use their superior riding and shooting skills!” 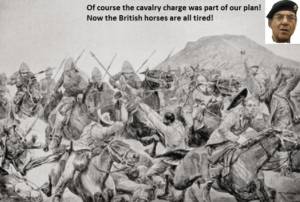 Comical Ali defiantly explains away the republican hammering at Elandslaagte

A few days later, the invaders were driven from their extensive trenchlines at Modder River – a position they had boasted as being ‘impregnable’. A portion of their force ran away as the British 9th Brigade got over the river and turned their flank, leaving the rest to yield the field under cover of darkness. Amazingly, however, this blatant defeat has been reinvented Comical Ali style:

“Ah – but that was always part of the plan! They never wanted to hold the position! Having the Free Staters run away when the British turned their flank was the idea all along!”

Over in Natal, the republican defeat at the Battle of Wagon Hill has also been given the Comical Ali treatment. The final act of that battle, the charge of the Devons, saw the remnants of the assaulting Boers routed from the field, but even this clear-cut victory is dismissed by some True Believers as having been pointless:

“Ah – but the clever old Boers were cunningly planning to run away anyway at that exact moment, so the charge actually achieved nothing!”

And the delusions don’t end there. Ignoring the fact that, before the war, Kruger had spent millions building forts to defend Pretoria, even the capture of their capital cities – something universally accepted in warfare to be ‘a bad thing’ – is spun by latter-day Boer fan-boys as yet another example of the masterplan working perfectly:

“Ah – but the Boers didn’t want to hold Bloemfontein / Pretoria! They didn’t like towns! The plan all along had been to abandon the cities without a fight and take the field as guerrillas! It worked perfectly… and the silly old Brits fell for it!”

Despite the claims that the Boers didn’t value towns, they expended a great deal of effort trying to take Kimberley, Ladysmith and Mafeking. The inconvenient reality that all three of these sieges in republican defeat is also spun away in Comical Ali style:

“Ah – but the Boers never really wanted to take the towns they spent months besieging! It was just a cunning plan to tie up Imperial troops!” (presumably by using tens of thousands of republican ones?)

When, at Paardeberg and then at the Brandwater Basin, the British army inflicted the two biggest defeats of the war on the republicans – capturing around 4000 Boers at each – even these out-and-out thrashings get reinvented as another part of the masterplan falling into place:

“Ah – but this was actually a good thing: it meant that only the hard core remained!”

The Comical Ali style rubbish is also trotted out to explain away defeats in the Guerrilla War. De la Rey’s failure to overwhelm the defenders at Elands River, for example, is spun as being another prime example of his military brilliance (and British bungling):

“Ah – but De La Rey didn’t actually want to defeat them! Sure, it might have looked like he tried for ten days and failed miserably, but actually it was all a cunning ruse to lure Imperial relief columns to their aid!”

Equally, when Imperial flying columns ran De Wet’s commandos to ground, forcing them to flee for their lives and abandon their guns, even this abject humiliation is trumpeted as a success:

“Ah – but don’t you see!? This was actually another example of de Wet’s brilliance – he had suddenly realised that he didn’t want his guns! They were no use to him anymore! By running away and leaving them behind, he tricked the stupid old Brits into lugging them about the veldt! The man was a genius!”

Indeed, some of the straw-grasping excuses trotted out to explain away each and every republican defeat are so far-fetched and ridiculous that even old Comical Ali would blush while saying them. Perhaps we should therefore let the deluded old lunatic have the final word: 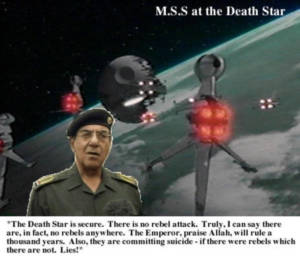