One hundred years ago today, with the First World War still very much underway, the Royal Naval Air Service[i] and the army’s Royal Flying Corps were amalgamated to form the Royal Air Force – the world’s first independent Air Force[ii] and, at the time, also the biggest. The former head of the Royal Flying Corps, Hugh ‘the Camel’ Trenchard[iii], was instrumental in the formation of an independent air force, and would serve as its first commander. Indeed, and though he disliked the sobriquet, Trenchard is still thought of as ‘the Father of the RAF’. 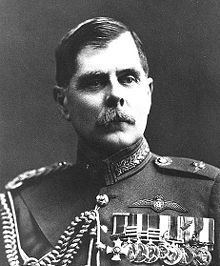 The Father of the RAF

Hugh Montague Trenchard was born in Somerset to a military family but failed to gain entrance into the Royal Navy, and then twice botched the entrance exams for the army’s officer training academy at Woolwich. Seemingly not a man to take a hint, Trenchard then attempted to gain his commission through the militia, but failed there twice too, only finally scraping into the army by the narrowest of margins. He was nevertheless commissioned into the Royal Scots Fusiliers[iv] and posted to India in 1893. Though – and much to his chagrin – Trenchard did not see active service on the NW Frontier, he soon proved himself an expert marksman, winning the All-India Rifle Championship in 1894. He also excelled as a horseman and polo player while in India, establishing a regimental polo team and even playing against the young Winston Churchill there. A quiet and rather awkward man, however, he was regarded as something of an odd fish by his brother officers, gaining the somewhat unflattering nickname of ‘the camel’ as ‘he neither drank nor spoke’. 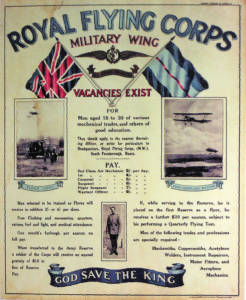 Trenchard was still in India in 1899 when Kruger launched his invasions of Britain’s Southern African territories. His efforts to see action in the Boer War were initially thwarted, however, and he was not permitted to join his regiment when it was shipped there. It was only after much behind-the-scenes string pulling that Trenchard (by then a Captain) finally arrived in South Africa in July 1900, and was immediately tasked with forming an MI company, mainly from some rather rowdy and spirited Australian volunteers. His unit was part of General Barton’s 6th (Fusilier) Brigade based out of Krugersdorp and was involved in various skirmishes over the next few weeks.
After one particular night march, the vanguard of the Brigade fell upon a Boer laager at dawn on the 9th of October. The 150 or so Boers were taken by surprise and fled on horseback, with Trenchard and his Aussies in hot pursuit. After a chase of ten miles or so, however, it appeared they had lost their quarry as, upon reaching a farm called Dwarsvlei, all seemed quiet. Leaving most of his men to provide cover, Trenchard and four others approached the farmhouse but in so doing walked straight into an ambush, coming under fire from the high ground all around. Trenchard was hit in the chest but managed to get into cover of the farmhouse while the rest of his company opened up on the ambushers. The Australians quickly won the firefight, killing and wounding several Boers, capturing some others and putting the rest to flight (again). Captain Trenchard, badly wounded and unable to feel his legs, was put in a wagon and taken back to Krugersdorp. 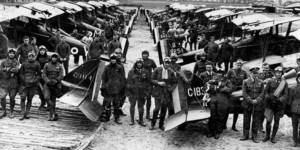 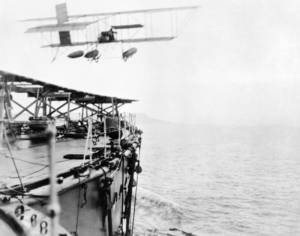 In hospital, the doctors gave Trenchard little chance of surviving – the bullet had punctured his left lung and grazed his spine. Over six pints of blood were drained and he rather miraculously made it through the night, though few thought he’d ever be able to walk unaided again. Trenchard was later moved to another hospital in Johannesburg and then shipped home to convalesce in Switzerland where it was (perhaps a little optimistically) hoped the mountain air would help his lung recover.
Only able to move about on sticks, the indomitable Trenchard nevertheless decided to take up bobsleighing while in Switzerland. After one especially bad crash sent him flying off the track and knocked him unconscious, he came round to find that, bizarrely and rather astoundingly, his spine had been knocked back into place by the impact, and he was able to walk properly again. Never a man to rest on his laurels, Trenchard won the St. Moritz Tobogganing Club’s Freshman and Novice’s Cups a few days later – not bad for a man who couldn’t walk unaided just a couple of weeks before. 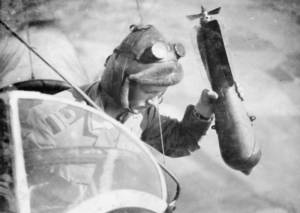 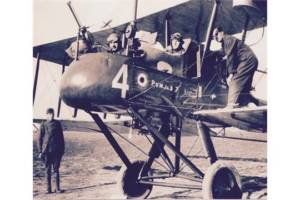 Magnificent Men and their Flying Machines

Convinced this miracle toboggan crash had instantly rendered him fully fit for military service again, Trenchard returned to England and began pushing to be permitted to return to the war in South Africa, finally gaining approval in July 1901. Upon his arrival, Trenchard was given command of another MI company, this time operating out of Pretoria. Far from being fully recovered, however, after long days in the saddle his entry and exit wounds tended to bleed.

Such trivialities did not stop Trenchard playing an active and daring part in the last few months of the Guerrilla War. He even enjoyed personal contact with Lord Kitchener who used him on a variety of tasks, including an attempt to capture the remnants of the Boer ‘Government’. Though the endeavour was unsuccessful, it nevertheless earned him a Mention in Dispatches. Trenchard was promoted to brevet Major just after hostilities ended. 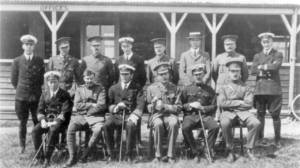 After the Boer War, Trenchard saw more active service in Nigeria with the West African Frontier Force before returning to join his Regiment which was by then based in Londonderry. Trenchard took up flying in 1912 and the rest, as they say, is history.
How lucky the Empire was to have men like Trenchard on hand during the Boer War – and how lucky we all are that the RAF he ‘fathered’ was on hand to foil Hitler’s schemes in the Summer of 1940. 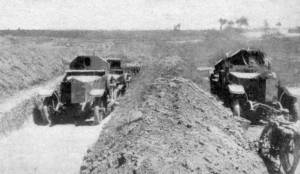 [i] Some wags reckoned the initials, RNAS, actually stood for ‘Rather Naughty After Sunset’

[ii] Formed in 1920, initially from 100 aircraft donated by Great Britain, the South African Air Force is often claimed to be the world’s 2nd oldest air force. Canada, Australia, New Zealand and India also received 100 aircraft each at the same time to form air forces. How frightfully terrible the British Empire was: always ‘exploiting’ the colonies… In contrast, the USAF would not become an independent arm until 1947. Trenchard assisted with the establishment of this too, leading to USAF Generals to dub him ‘the Patron Saint of Air Power’

[iii] Later, Marshal of the Royal Air Force Hugh Montague Trenchard, 1st Viscount Trenchard, GCB, OM, GCVO, DSO (1873-1956). Trenchard’s funeral was held in Westminster Abbey and his name lives on in various military establishments. The ethos he instilled in the RAF was of mastery of the air through offensive action. He was also a pioneer of strategic bombing and imperial policing through air power

[iv] A regiment with a proud history dating back to 1678, at the time of the Boer War the Royal Scots Fusiliers’ Depot was in Ayr and it recruited in the south west of Scotland. For service in the Boer War, the regiment (which should not be confused with ‘the Royal Scots’) was awarded the Battle Honours of ‘Relief of Ladysmith’ and ‘South Africa 1899-1902’. The regiment had one VC winner during the Boer War: Private Ravenhill won his medal trying to recover the guns at Colenso.
Like other units, the Royal Scots Fusiliers was greatly expanded during the Great War, with Sir Winston Churchill serving as the CO of a newly raised 6th Battalion for a time. The Royal Scots Fusiliers were amalgamated with the Highland Light Infantry in 1959, the new regiment being named The Royal Highland Fusiliers. This too has since been amalgamated in the endless, short-sighted cuts inflicted upon the British army.