On March 19th, 1982, a group of Argentinian scrap metal workers docked in South Georgia (about 850 miles east of the Falklands) and raised the Argentine flag. Whether or not this was authorised by Galtieri’s government is still unclear, but it nevertheless marked the start of the slide towards the Falklands War, a conflict which has been described as the last Colonial War.

Argentine forces invaded in the Falkland Islands on the 2nd of April, with other units also capturing South Georgia and the South Sandwich Islands. Fortunately, Margaret Thatcher was not a lady to stand for this sort of thing and immediately dispatched a Royal Navy Task Force to eject the invasion – something which, despite fighting 8000 miles from the UK – was duly achieved within 10 weeks. Winning a war so far from home with the threadbare forces available was a feat of military prowess, determination and British bloody-mindedness which American military planners had dismissed as ‘an impossibility’. 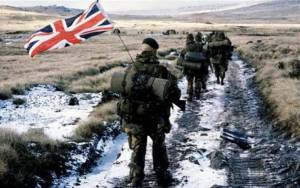 Royal Marines yomp across the Falklands

Despite the Argentine invasion being a blatant land grab of British territory by a distinctly unpleasant regime, the usual self-loathing types of the British Left rushed to the support of Galtieri’s dictatorship over the democratic wishes of the Falkland Islanders. In so doing, they were simply carrying on a tradition which included the reaction of some to the Boer invasions of British territory in 1899 – another war which has been re-invented in certain fevered minds as an act of ‘British aggression’.