A visit to Pretoria’s Fort Klapperkop (and the attached South African Defence Force Memorial) is well worth it and makes for an interesting afternoon out. Entry is very cheap, the Fort is well preserved and there is plenty to see there – indeed, it is worth going just for the views over Pretoria if nothing else. One of four forts built at the time, Klapperkop was completed in early 1898 and, though diminutive, was a state-of-the-art fortification featuring a paraffin powered generator, plus telephone and telegraph communications. 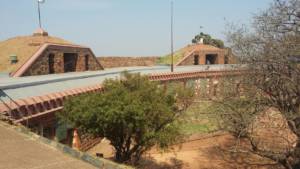 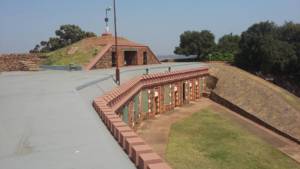 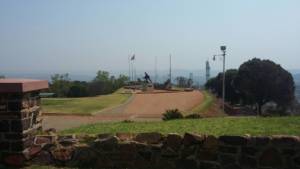 Do not, however, fall for the blatant propaganda spread by the ‘information’ boards one finds therein. I found this one especially entertaining: 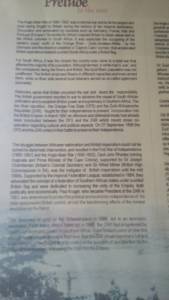 With the highlighted section in particular being, shall we say, more than a little ‘suspect’:

It’s not the best photo, but – and in breathtakingly sweeping statement –  the highlighted text asserts:

‘Historians agree that Britain provoked the war and bears the responsibility. The British government resorted to war to advance the cause of South African unification and to establish British power and supremacy in Southern Africa’.

Some historians (those still desperate to push the Apartheid-era version of the war: ie. that it was all the fault of the scheming Brits and that the Boere were utterly blameless victims) do indeed ‘agree’ with this take, but by no means all do. In reality, one only has to expand one’s reading beyond Pakenham and / or Apartheid-regime school text books, to realise that it was not the British, but actually the republics, which ‘resorted to war’ to try and achieve their aims. Indeed, it quickly becomes very apparent that many historians do not ‘agree’ that Britain provoked the war or that she bears all the responsibility.

Here, for example, is a statement from a historian who most certainly did not ‘agree’ with version so desperately peddled at Fort Klapperkop:
‘It would be a misuse of terms to call the general Boer designs against the British a conspiracy, for it was openly advocated in the press, preached from the pulpit, and preached upon the platform, that the Dutch should predominate in South Africa, and that the portion of it which remained under the British flag should be absorbed by that which was outside it’.[i]

And here’s another, querying Pakenham’s frantic attempts to lay all the blame on the British:
‘if Milner is placed centre-stage, it follows that Kruger, Steyn [president of the Orange Free State] and Smuts will get off lightly and that the Afrikaners of the Cape Province will hardly score a mention’.[ii]

Another historian who saw through Pakenham’s anti-British agenda commented:
‘Preparing for a Small War’ [a chapter in Pakenham’s book] is ‘all about the British, Milner at the Cape, Lansdowne, Wyndham and Wolseley at the War Office, Chamberlain at the Colonial Office, as if Kruger purchased no Mausers, did not issue an ultimatum, nor send the commandos forth into the Cape and Natal’

One contemporary observer summed up the aspirations of Kruger et al in the years prior to the war:
‘The goal, held steadily in view, was the establishing of an independent nation ruling all South Africa, from the Zambesi to the sea.’

This was not really a surprising conclusion to arrive at, considering that the Rev. S. J Du Toit – a high level delegate of the ZAR government was saying exactly that as early as 1884:
‘The South African Flag shall yet wave from Table Bay to the Zambezi, be that end accomplished by blood or by ink. If blood it is to be, we shall not lack men to spill it.’

As yet another historian comments, the Rev Du Toit’s remarks:
‘would seem to be a fair summary of the foreign policy pursued by the Kruger Government over the next 15 years’[iii]

Far from agreeing that the republics were blameless victims, wishing only to be left in peace, Byron Farwell, makes this comment in his excellent book, The Great Boer War:
‘Both sides wanted a united South Africa, though, of course differed in their ideas of who should dominate it.’

While Andrew Roberts, the eminent and best selling historian agrees that the republics were itching for a confrontation:
‘British policy-makers became convinced that British paramountcy in southern Africa, so crucial for the future development and protection of the Empire, was under growing threat … This racial antagonism between Boer and Briton was, it was felt in Cape Town, Pretoria and London, leading inexorably towards a clash.’

Roberts also rubbishes the lunatic notion that the ZAR was ‘forced to fight, just to preserve its independence’:
‘the two obstinate bearded old patriarchs, Salisbury and Kruger, both knew that this struggle was actually about ultimate regional paramountcy, about showing who was ‘Boss’ in South Africa’.

Yet another historian, George Gibson, wrote:
‘The Transvaal Republic went to war rather than concede a measure of reform in favour of the uitlanders, and had no sooner declared war that it openly avowed that the object of the war was not so much the maintenance of the Transvaal franchise in its existing form, as the destruction of British power in South Africa.’

I could go on and on, but I think by now it is perfectly clear that plenty of historians do not ‘agree’ with the falsehood which is presented on the ‘information’ board at Fort Klapperkop. Indeed, one is left amused at the shameless arrogance of the broad-brush statement that ‘historians agree’ with this nonsense. There are, of course, those who do indeed desperately twist themselves in knots to deny that the republics bear any responsibility whatsoever for the war, even to the extent of pretending that the British ‘resorted to war’, rather than admitting it was the republics which attacked the British. It would not be unreasonable to say that such people either do not understand the subject, or are so blinded by anti-British feeling as to lack all objectivity. Or often both.

To claim that Britain ‘provoked the war and bears the responsibility’ is highly simplistic, and a childish attempt to absolve the Boer republics of any and all blame. As noted by Farwell, Roberts etc above, it is clear that Kruger’s ambition was to replace the British as the pre-eminent power in Southern Africa. Furthermore, no sane person could deny that the Boers were the ones who started the war by invading British territory in all directions – this, and as much as it upsets a few people, is undeniable historical reality. Equally undeniable is that they annexed the land they grabbed, re-named towns they captured and instituted their own racist laws in their newly acquired lands. No rational person would claim these were the actions of ‘innocent victims’ who bore no responsibility for a conflict which they blatantly sparked.
There was fault on both sides, but if one takes the time to actually research the subject, it quickly becomes clear that Kruger had been planning for an offensive war against Great Britain since the mid-1880s, the openly and oft-stated ambition being to drive the British from Southern Africa altogether. It is undeniable, for example, that he was pushing for an offensive alliance with the Orange Free State as early as 1887 – many years before the Jameson Raid or the arrival of Lord Milner on the scene.

In 1897, even the decidedly pro-Boer pioneer of Investigative Journalism, William Stead, admitted:
‘The Boer ideal was ‘Anti-British Federation in South Africa’. Mr Secretary Leyds has been appointed a kind of a Boer Minister in Europe, where he will no doubt do his utmost to encourage the idea that the federated Dutch Republics can be relied upon by anyone who wishes to destroy British supremacy in South Africa’.

No less a man than Advocate J. W. Wessels, the pre-war Leader of the Pretoria Bar, summed up those who shared Kruger’s ambitions:
‘They hate with a bitter hatred everybody who is not of their way of thinking, and they would impose their will on their fellows, not by persuasion, but by brute force. To them the Mauser is a holy symbol … their aspirations are to pull down the British Flag, to impose the Dutch language on all, and to establish a reign of barbaric terror.’

We shall let another highly placed Afrikaner, the ex-OFS Volksraad member, Paul Botha, have the last word. He had no doubt as to where the responsibility for the war lay, and wrote of the tragedy of Steyn coming to power in the OFS, an event which plunged his beloved republic on a lunatic bid to drive the British from South Africa:
[Steyn’s election was] ‘…due to the influence of Paul Kruger, who, by his emissaries, agents, and secret service money undermined the Free State. His subsidized organ, the ‘Bloemfontein Express’, was the first to advocate his candidature. Paul Kruger did not want an honest Free State patriot like Fraser, whose first thought would have been his own country, at the head of the sister republic. He wanted a servile tool. Steyn’s ambition did the rest. He sold his country, body and soul, to the Transvaal, in the hope that Paul Kruger’s mantle would fall to him. The first time that Kruger visited the Orange Free State after Steyn’s election, the latter introduced him with these words, ‘This is my father.’ The thought occurred to me at the time, ‘Yes and you are waiting for your father’s shoes.’ He hoped to succeed ‘his father’ as president of the Transvaal, of the combined republics, aye, even of United South Africa! For this giddy vision he ignored the real interests of our little State—he was false to his oath, and dragged the country, whose integrity and independence he had sworn to uphold, into a wholly and absolutely unnecessary and insane war.’